After a lull of >20 years, Algeria experienced a cholera outbreak in 2018 that included 291 suspected cases. We found that outbreak isolates were Vibrio cholerae O1 serotype Ogawa from seventh pandemic El Tor sublineage AFR14, which corresponds to a new introduction of cholera into Africa from South Asia.

Algeria is a large country (2,381,741 km2) in North Africa (6). The World Bank (https://www.worldbank.org) ranks Algeria as the third largest economy in the Middle East and North Africa region. In 2018, Algeria had ≈42.2 million inhabitants, ≈30.6 million of whom lived in urban areas (Macrotrends LLC, https://www.macrotrends.net).

We used conventional microbiology and whole-genome sequencing to characterize virulence and antimicrobial resistance of clinical and environmental isolates collected during this outbreak. We also performed a phylogenomic analysis of >1,200 seventh pandemic El Tor genomes to determine whether the 2018 outbreak in Algeria was caused by a sublineage previously circulating in the country, a sublineage circulating in sub-Saharan Africa, or a new sublineage imported from elsewhere.

The Enterobacteria Laboratory of the Institut Pasteur d’Algérie performed microbial analyses for case confirmation (Appendix 1 Table 1; Appendix 2). During August 14–September 27, 2018, this laboratory received 695 stool samples from hospitals or hygiene laboratories in 7 wilayas, 277 from suspected case-patients and 418 from case-contacts, as well as 24 clinical isolates (14 from patients and 10 from case-contacts) and 5 environmental isolates (2 from wastewater, 2 from public drinking water sources, and 1 from stored water) for confirmation. In all, we confirmed 97/291 (33.3%; 95% CI 28.2%–38.9%) suspected cases as V. cholerae O1 El Tor serotype Ogawa carrying the ctxA gene and 29/428 (6.8%; 95% CI 4.8%–9.6%) case-contacts as asymptomatic carriers. Of the 5 environmental isolates, we also confirmed 2 from wastewater and 1 from stored water as serotype Ogawa. 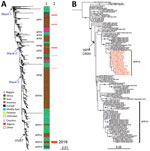 We used whole-genome sequencing, comparative genomics, and phylogenetic analysis to characterize a selection of 20 V. cholerae O1 isolates, 17 clinical and 3 environmental (Appendix 1 Tables 2, 3; Appendix 2). We placed these isolates in context with a global collection of 1,265 seventh pandemic El Tor genomic sequences (Appendix 1 Table 4), including 23 isolates collected in Algeria during 1971–1997. We constructed a maximum-likelihood phylogeny of 1,285 genomes with 10,339 single-nucleotide variants (SNVs) evenly distributed over the nonrepetitive, nonrecombinant core genome. All the isolates recovered in Algeria during 2018 belonged to the seventh pandemic El Tor lineage and clustered in the wave 3 clade containing isolates carrying the ctxB7 allele (Figure 2, panel A) (3). The 2018 isolates did not belong to sublineages previously found in Algeria, including AFR1, which circulated during the 1970s and early 1980s; AFR7, which circulated during the mid- to late-1980s and early 1990s; or AFR8 and AFR9, which circulated during the mid-1990s (Figures 1, 2) (8). The 2018 isolates also did not belong to other sublineages found in Africa, including the most recently introduced AFR13 sublineage, previously known as T13 (8–11). AFR13 has been circulating in eastern Africa since 2015 and in Yemen since 2016 (Figure 1). A second phylogeny, restricted to 115 wave 3 ctxB7 isolates from the distal part of the global tree, showed the 2018 isolates from Algeria are closely related to isolates from South Asia collected during 2017–2018 in India and Bangladesh (Figure 2, panel B). This finding suggests the 2018 cholera outbreak in Algeria was cause by a newly imported strain (sublineage AFR14) from South Asia, rather than resurgence of any sublineage previously in Algeria or introduction of a sublineage circulating elsewhere in Africa.

The median pairwise distance between the 20 isolates recovered during the 2018 outbreak was 2.5 (range 0–8) core-genome SNVs. All 20 isolates had similar genomic features (Table), including the toxin-coregulated pilus subunit A gene variant, tcpACIRS101, a deletion (ΔVC_0495–0512) in the Vibrio seventh pandemic island II (VSP-II), and an SXT/R391 integrating conjugating element (ICE), called ICEVchInd5, encoding resistance to streptomycin (strAB), sulfonamides (sul2), trimethoprim (dfrA1), sulfamethoxazole/trimethoprim (dfrA1 and sul2), and intermediate resistance to chloramphenicol (floR) (8). The Algeria isolates had mutations of VC_0715, resulting in the R169C substitution, and VC_A0637, resulting in the premature stop codon (Q5Stop) conferring intermediate nitrofuran resistance. Isolates also had mutations of the DNA gyrase, gyrA (S83I), and topoisomerase IV, parC (S85L), genes conferring resistance to nalidixic acid and decreased susceptibility to ciprofloxacin (8,9). In addition, isolates had a specific nonsynonymous SNV in the vprA gene (VC_1320), which resulted in the D89N substitution, conferring susceptibility to polymyxins (9), as reported for the AFR13 sublineage, although resistance to polymyxin B has been used as a marker of V. cholerae O1 biotype El Tor since the seventh pandemic began (12).

In summary, V. cholerae O1 isolates collected during a 2018 cholera outbreak in Algeria were a seventh pandemic El Tor sublineage, AFR14, newly introduced into Africa from South Asia. Our findings suggest that, in addition to appropriate control and prevention measures during outbreaks, such as those used in Algeria, reducing the burden of cholera in South Asia might aid in long-term control of cholera in Africa.

Dr. Benamrouche is a medical microbiologist, head of the Enterobacteria Laboratory at the Pasteur Institute of Algeria, Algiers, Algeria, Pasteur International Network, and a senior lecturer on the Faculty of Medicine, University of Algiers I, Algiers, Algeria. Her research interests include the surveillance and epidemiology of enteric bacterial pathogens and antimicrobial resistance.

We thank all the participants and particularly Hamza Letlout of Public Health Facility of Tipaza and Ahlem Toua of Institut Pasteur d’Algérie, Annex of Oran, for sending stool samples or Vibrio cholerae strains and Abdelali Meftah of Public Hospital Establishment of Boufarik for his assistance during this epidemic.

This work was supported by the Pasteur Institute of Algeria, Institut Pasteur, and by the French Government’s Investissement d’Avenir program, Laboratoire d’Excellence, Integrative Biology of Emerging Infectious Diseases (grant no. ANR-10-LABX-62-IBEID).

Page created: March 23, 2022
Page updated: May 22, 2022
Page reviewed: May 22, 2022
The conclusions, findings, and opinions expressed by authors contributing to this journal do not necessarily reflect the official position of the U.S. Department of Health and Human Services, the Public Health Service, the Centers for Disease Control and Prevention, or the authors' affiliated institutions. Use of trade names is for identification only and does not imply endorsement by any of the groups named above.