Streptococcus oralis is a viridans streptococcus that is divided into 3 subspecies S. oralis subsp. oralis, dentisani, and tigurinus (1). Differentiation between these subspecies and other α-hemolytic streptococci, including S. pneumoniae, remains difficult because they share similar biochemical properties. S. oralis inhabits the oral cavity and can cause severe infections in persons with immunodeficiency (2). Antimicrobial drug resistance and capsule expression studies have demonstrated that gene transfer can occur from oral Streptococcus spp. to S. pneumoniae (3–5). Most oral Streptococcus spp. have a pneumococcus-like capsule locus and produce capsular polysaccharides (6).

We report 2 cases of invasive streptococcal disease in older adults in Japan (Table). Case 1 occurred in a 69-year-old man with gastric cancer; case 2 occurred in a 78-year-old man with bacteremic meningitis who had no underlying disease. Both patients were successfully treated with antimicrobial agents. The bacterial isolates (ASP0312-Sp from case 1 and SP2752 from case 2) contained α-hemolytic bacteria that formed characteristic mucoid colonies on blood agar (Table). Quellung reactions were strongly positive for pool R or pneumococcal serotype 3 antisera (Statens Serum Institut, https://en.ssi.dk), suggesting that the isolates were S. pneumoniae serotype 3. However, both isolates were optochin-resistant and bile-insoluble. Moreover, multilocus sequence typing (MLST) showed that the sequences of all 7 alleles of ASP0312-Sp and 5 alleles of SP2752 differed from those registered in the MLST database (https://pubmlst.org) (Table). For SP2752, the allele numbers were 341 for gdh and 406 for spi. Furthermore, we observed nucleotide differences between ASP0312-Sp and SP2752 in aroE (31 different bp), gdh (34 bp), gki (25 bp), recP (25 bp), spi (14 bp), xpt (47 bp), and ddl (15 bp), which indicated that the strains were distinct. These results suggested that the 2 strains were nonpneumococcal Streptococcus spp. 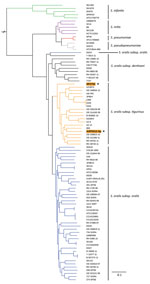 For species identification, we performed phylogenetic analyses of whole-genome sequences (Appendix). Homologous core gene clustering showed that ASP0312-Sp and SP2752 belonged to the S. oralis clade (Figure); they were distant from one another, which was consistent with the MLST results.

We performed homology searches of 36 known pneumococcal virulence genes because multifragment recombination has been demonstrated during the capsular transformation process in pneumococcal populations (8). In ASP0312-Sp and SP2752, the hyl gene, which encodes hyaluronate lyase (9), was located distantly from the capsule locus and shared 96% identity with that of S. pneumoniae. We did not detect homologs of the other 35 genes for either isolate.

A recent study reported that acapsular pneumococcus became virulent after transformation with the capsule gene from SK95, which is an oral S. mitis strain (5). This previous study demonstrated a cross-species transformation from a commensal streptococcal species to pneumococcus (5). Our results complement this report, although the direction of transformation in our study was reversed. Our analyses of 2 human patients with invasive disease caused by S. oralis provided evidence of cross-species gene transfer from pneumococcus to a commensal streptococcal species. Acquisition of capsule and hyl genes might have increased pathogenicity (9,10) and contributed to progression of invasive disease in these 2 cases.

In conclusion, because of discrepancies between phenotypic and biochemical analyses, we used MLST and whole-genome sequencing to identify streptococcal species in these 2 patients. Our study indicates a potential pitfall for identifying and serotyping pneumococci that can occur if the bacteria are not isolated. Thus, when α-hemolytic streptococci are isolated from a sterile site, clinicians should request molecular analyses to identify the causative species, regardless of the mucoid phenotype.

Dr. Chang is a microbiologist at the National Institute of Infectious Diseases, Tokyo, Japan. Her research interests focus on the microbiology of Streptococcus pneumoniae.

We thank Moon H. Nahm for his valuable comments.

This work was supported by grants from the Japan Agency for Medical Research and Development (AMED; no. JP20fk0108139) and Ministry of Health, Labour and Welfare (no. JPMH19HA1005).

Page created: June 03, 2022
Page updated: July 21, 2022
Page reviewed: July 21, 2022
The conclusions, findings, and opinions expressed by authors contributing to this journal do not necessarily reflect the official position of the U.S. Department of Health and Human Services, the Public Health Service, the Centers for Disease Control and Prevention, or the authors' affiliated institutions. Use of trade names is for identification only and does not imply endorsement by any of the groups named above.