Three recent drinking-water–associated cryptosporidiosis outbreaks in Northern Ireland were investigated by using genotyping and subgenotyping tools. One Cryptosporidium parvum outbreak was caused by the bovine genotype, and two were caused by the human genotype. Subgenotyping analyses indicate that two predominant subgenotypes were associated with these outbreaks and had been circulating in the community.

Human cryptosporidiosis is predominantly caused by the human and bovine Cryptosporidium parvum genotypes, which differ in host range; the former infects mostly humans under natural conditions, and the latter infects both humans and some farm animals such as cattle, sheep, and goats (1). In many geographic areas, both C. parvum transmission cycles can occur in humans, but the importance of each genotype as a source of human infection probably varies (2–4). Both genotypes have been involved in waterborne outbreaks of human cryptosporidiosis in the United States, Canada, and the United Kingdom (2,5,6).

From April 2000 to April 2001, three drinking-water–associated outbreaks of cryptosporidiosis occurred in Northern Ireland. These outbreaks were epidemiologically unrelated and originated from geographically separate areas. Concerns have been raised about a possible relationship between C. parvum genotypes and subgenotypes associated with these outbreaks. In this study, for genotyping analysis, we investigated these outbreaks using a small subunit rRNA (SSU rRNA)-based polymerase chain reaction-restriction fragment length polymorphism (PCR-RFLP) genotyping tool, as well as the Cryptosporidium oocyst wall protein (COWP) PCR assay. For subgenotyping analysis, sequence typing of the 60-kDa glycoprotein (GP60) was used.

The three drinking-water–associated outbreaks occurred in the greater Belfast area. Outbreak A occurred during April and May 2000; at least 129 cases were laboratory confirmed. Outbreak B occurred in August 2000, involving at least 117 cases. Outbreak C occurred in April 2001; at least 230 people were infected (7–9; unpub. data). An outbreak patient was defined as a person with microscopically confirmed Cryptosporidium infection who became ill during the outbreak period and who was a resident in the water supply areas. The attack rates for outbreaks A, B, and C were 34, 180, and 58 cases/100,000 persons, respectively. Outbreak B was thought to be caused by the ingress of human sewage from a septic tank into the drinking water-distribution system and C from the ingress of wastewater from a blocked drain.

C. parvum genotype in human fecal samples was first determined by a COWP gene-based PCR-RFLP tool (10). Oocyst suspensions were prepared from feces by using salt flotation (11). The oocysts were washed and resuspended in deionized water and stored at 4°C before use. To extract DNA, oocyst suspensions were incubated at 100°C for 60 minutes, digested with proteinase K (3 mg/mL) in lysis buffer at 56°C for 30 minutes, and extracted by spin-column filtration (QiAMP DNA kit, Qiagen, Crawley, UK). Extracted DNA was stored at -20°C before use. Genotypes were investigated by using the COWP gene primers cry15 and cry9 to amplify a 553-bp region, which was then subjected to endonuclease digestion by RsaI (10).

Genotypes were confirmed by using an SSU rRNA-based PCR-RFLP tool (12). Subgenotyping was done by sequence analysis of the GP60 gene (13). Before molecular analysis, the wastewater sample was processed by both salt flotation (11) and immunomagnetic separation (Dynal, Lake Success, NY), following the manufacturer-recommended procedures (14). Both genotyping and subgenotyping tools used nested PCR amplification of targeted genes. The primers used for GP60 were 5´-ATA GTC TCC GCT GTA TTC-3´ and 5´-TCC GCT GTA TTC TCA GCC-3´ for primary PCR and 5´-GGA AGG AAC GAT GTA TCT-3´ and 5´-GCA GAG GAA CCA GCA TC-3´ for secondary PCR. The PCR reaction contained 1X Perkin-Elmer (Norwalk, CN) PCR buffer, 3 mM MgCl2, 200 µM (each) deoxynucleoside triphosphate, 200 nM of the forward and reverse primers, 5 units of Taq polymerase, and 0.5–2 µL of DNA template (for primary PCR) or 2 µL of primary PCR product (for secondary PCR) in a total 100-µL reaction mixture. Each PCR reaction was then subjected to 35 cycles of denaturation at 94°C for 45 seconds, annealing at 50°C for 45 seconds, and extension at 72°C for 60 seconds, with an initial denaturation at 95°C for 3 minutes and a final extension at 72°C for 10 minutes. PCR products were sequenced in both directions on an ABI3100 (Applied Biosystems, Foster City, CA) with forward and reverse primers. An additional sequencing primer (5´-GAG ATA TAT CTT GGT GCG-3´) was used in the sequencing of GP60 PCR products. We aligned the study’s GP60 nucleotide sequences with each other and with sequences from the GenBank database with GCG software (Genetics Computing Group, Madison, WI). A neighbor-joining tree was constructed from the aligned sequences as described (15).

Thirty-three of the 34 stool samples from outbreak A were amplified by both the COWP and SSU rRNA-based nested PCRs. RFLP analysis of the PCR products showed that all 33 PCR-positive samples had the C. parvum bovine genotype. Thirty-two of the 42 stool samples from outbreak B were also positive by PCR, and all belonged to the C. parvum human genotype. Furthermore, in outbreak C, 36 of 44 samples had the C. parvum human genotype, and 8 had the bovine genotype. After further epidemiologic investigations, these eight bovine genotypes, although submitted to the primary diagnostic laboratory at the same time as the human genotypes, were considered contemporary sporadic cases and not part of outbreak C. These patients did not live in the distribution area of the water supply implicated in the outbreak. The patients lived in southern Down County, whereas the outbreaks occurred in southern Antrim County and northern Down County. Results of the two genotyping methods were in complete agreement in both detection rates and genotyping result. 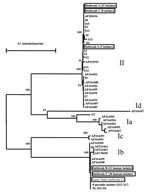 Figure. Genetic relationship among Cryptosporidium parasites found in three Northern Ireland outbreaks (outbreaks A, B, and C), sporadic cases in west Ireland (S1 to S14) and the northwest of England (S15 to...

Results of genotyping analysis support epidemiologic observations that these three drinking-water–associated outbreaks of cryptosporidiosis in Northern Ireland were unrelated, although they all occurred in the greater Belfast area over a 1-year period. Outbreak A was caused by the C. parvum bovine genotype, and outbreaks B and C were caused by the C. parvum human genotype. The occurrence of the C. parvum human genotype in outbreaks B and C suggests that these two outbreaks were, at least in part, caused by contamination of the drinking-water supply by seepage of raw sewage and through wastewater into the drinking water distribution systems, respectively. This finding illustrates the value of timely genotyping analysis during outbreak investigations. The source of contamination is further supported by subgenotyping analysis of the wastewater sample from the blocked drain that was epidemiologically implicated in outbreak C. This sample contained one subgenotype of the C. parvum human genotype indistinguishable from the subgenotype found in most infected persons.

Mr. Glaberman is an emerging infectious diseases fellow with the Centers for Disease Control and Prevention and the Association of Public Health Laboratories. His research interest is the ecology of microorganisms.

We thank Mick Mitchell for providing control oocysts. We also thank Anne Thomas, David Gomez, and Xu Jiru for providing technical support; and P. Donaghy, B. Morgan, and B. Smyth for information on outbreaks A, B, and C, respectively.

This work was supported in part by funds from the Food Safety Initiative at the Centers for Disease Control and Prevention and through an Emerging Infectious Diseases fellowship administered by the Association of Public Health Laboratories. JEM, CJL, BCM, and JSGD are supported by an EU Fifth Framework Grant [PLK1-CT-1999-00775].