Streptococcus suis sequence type (ST) 7 has been spreading throughout China. To determine events associated with its emergence, we tested 114 isolates. In all 106 ST7 strains responsible for human outbreaks and sporadic infections, the tetracycline-resistance gene, tetM, was detected on the conjugative transposon Tn916. Horizontal transmission of tetM is suspected.

A large outbreak of Streptococcus suis serotype 2 infection emerged in the summer of 2005 in Sichuan Province, People’s Republic of China, and resulted in 215 cases and 38 deaths among humans (1). Sporadic infections were identified in 4 other provinces. A smaller, previously overlooked, outbreak occurred in Jiangsu Province in 1998; 25 cases and 14 deaths were reported (1,2). The causative agent of the Sichuan and Jiangsu outbreaks was identified as a clone of S. suis sequence type (ST) 7 (3). ST7 was first identified in 1996 in a patient with meningitis in Hong Kong and later caused the 1998 outbreak in Jiangsu; it spread further to cause the largest outbreak in Sichuan in 2005 (3,4). The spread of S. suis ST7 across China underscores the need to better understand the genetic and ecologic events associated with its emergence as an important pathogen in humans.

Figure 1. Phylogenetic relationship of the tetM sequences of Streptococcus suis. An unrooted maximum-parsimony tree was based on multiple aligned partial tetM sequences of 2 S. suis (asterisk) and 53 reference sequences retrieved...

Because the gene tetM is reported to be associated with transposon Tn916, we designed 24 pairs of primers targeting its 24 ORFs based on published Tn916 sequences (Table 2). The complete sequence of Tn916 from SC84 was obtained by sequencing the PCR-synthesized fragments. Between Tn916 of SC84 and plasmid pYA470-4 of E. faecium, we observed 133 nt variations, 91 of which were in the tetM gene, 3 in the integrase gene, 1 in excisionase gene, and 38 in 10 additional ORFs. PCR showed that 111 isolates from China and 1 from Denmark have intact Tn916 (Table 1). 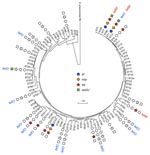 Figure 2. Horizontal transfer events of virulence genes and conjugative transposon Tn916 with tetM in Streptococcus suis sequence types. The rooted maximum-parsimony tree was based on the concatenated sequences of 7 housekeeping genes...

To determine the significance of horizontal gene transfer of Tn916 with the tetM and virulence genes, we constructed a rooted phylogenetic tree by using the maximum-parsimony method. The sequence of S. pneumoniae R6 was chosen as the outgroup that is closely related to S. suis (10). The data suggest S. suis ST7 evolved originally from ST1 and ST48. The horizontal transfer of tested virulence genes and tetM occurred in various stages of the evolution of S. suis and played a major role in the emergence of ST1 and ST7 (Figure 2).

We report that S. suis ST7 was responsible for 2 large outbreaks and sporadic infections in several provinces of China and has recently acquired the tetracycline resistance gene, tetM, associated with the conjugative transposon Tn916 (3,7). Horizontal transfer of Tn916 with the tetM gene occurred in at least 3 STs located at various stages in the constructed phylogenetic tree and played a central role in the evolution of the epidemic S. suis ST7 clone. All 3 virulence genes tested in this study were shown to be transferred horizontally (11–13).

Our data support the contention that Tn916 with tetM acts as an important selective factor that provides considerable advantages for the clone emergence and spread of S. suis ST7 (3). The widespread use of tetracycline in swine feed could provide the selective pressure for clone amplification and spreading, thus contributing to the outbreak of S. suis ST7 through Tn916 (14). The countrywide spread of S. suis ST7-tetM represents a model of selective pressure leading to the emergence of a bacterium as a virulent pathogen in humans. The case of S. suis ST7 is a sign that pathogens present in food animals can result in substantial public health problems if no action is taken to prevent the indiscriminate use of antimicrobial drugs in animal feed (15).

Dr Ye is a microbiologist at the State Key Laboratory for Infectious Disease Prevention and Control, Beijing. Her main research interest is emerging infectious diseases. She is a group leader for the study of S. suis infection in China.