Microsporidiosis and Malnutrition in Children with Persistent Diarrhea, Uganda

We show that the microsporidian fungus Enterocytozoon bieneusi is associated with lower rates of weight gain in children in Uganda with persistent diarrhea. This relationship remained after controlling for HIV and concurrent cryptosporidiosis. Children with microsporidiosis were predicted to weigh 1.3 kg less than children without microsporidiosis at 5 years of age.

Enterocytozoon bieneusi is an important cause of persistent diarrhea, intestinal malabsorption, and wasting in HIV-positive adults. Mucosal damage associated with microsporidiosis is more extensive than that related to other opportunistic intestinal infections (1,2) and leads to substantial malabsorption of carbohydrates, fat, and essential nutrients (2–5). Although microsporidiosis is common in children <5 years of age, particularly those who live in developing countries (6,7) or who are HIV positive (6,8,9), the effects of infection on nutritional health of these vulnerable populations are not well documented. We reexamined anthropometric data of children in Uganda with persistent diarrhea (6) and used regression analysis to determine whether there is an association between microsporidiosis and reduced growth rates.

A total of 243 children <60 months of age with persistent diarrhea (>14 days) were enrolled at Mulago Hospital in Kampala, Uganda, from November 2002 through May 2003. After informed consent was obtained, demographic, anthropometric, and clinical information was collected from each child. E. bieneusi spores were detected in stool specimens by using a nested PCR with E. bieneusi–specific primers (7). Cryptosporidium oocysts were detected by using immunofluorescence microscopy, with confirmation and genotyping subsequently determined by PCR–restriction fragment length polymorphism analysis (10). HIV status was determined by using established methods, and children positive for HIV were referred to the Mulago Hospital Pediatric Infectious Disease Clinic for further care. The study population and results of primary analysis are described in more detail elsewhere (6). 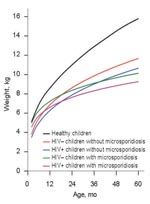 Figure 2. Weight-for-age growth curves of study children (as modeled by multiple linear regression) and reference populations in Uganda (11). Curves represent the median weight-for-age, averaged between boys and girls and...

Given consistent reports of severe wasting and malnutrition in HIV-positive adults with microsporidiosis, it is conceivable that E. bieneusi infection early in life may result in malnutrition. Two cross-sectional studies attempted to correlate microsporidiosis with poor anthropometric status but did not find a significant association (7,12). However, the dichotomous method used for these assessments is sensitive to the choice of cut-off values. Although children who fall >2 SDs below the reference growth curves are conventionally categorized as malnourished, this cut-off does not denote a biologically meaningful distinction between healthy and malnourished children.

Using regression analysis, we present evidence that microsporidiosis is associated with growth faltering in children in Uganda. In this approach, anthropometric data were treated as continuous variables, thus avoiding arbitrary categorization of children into malnourished and normally nourished groups. Lack of evidence for an independent effect of microsporidiosis on linear growth might be explained by the fact that these children were currently infected with E. bieneusi, and longer intervals are needed to document decelerating linear growth. In contrast, weight-for-age reflects chronic and acute nutritional states. Because all study participants had a history of persistent diarrhea and stool was generally collected on the day of hospitalization, nosocomial acquisition of microsporidiosis was unlikely.

There are several limitations to this analysis. The causal role of E. bieneusi in childhood malnutrition cannot be inferred because of the retrospective and cross-sectional study design. Although intestinal infection in children may impair absorption of nutrients (as documented in adults), malnourished children may also have immune defects that predispose them to E. bieneusi infection. Because the PCR was specific for E. bieneusi, we cannot rule out that some children were infected with other microsporidian species. However, E. bieneusi is the more common of 2 species known to cause intestinal microsporidiosis (13,14). In previous studies at Mulago Hospital, 16.8% of children with acute diarrhea and 16.8% of children without diarrhea had microsporidiosis (7). Because all children in the current study had persistent diarrhea, direct comparison between groups was possible without the need to control for diarrhea status. However, we cannot comment on the effect of acute or subclinical infection on nutritional health. Residual confounding may exist through sociodemographic factors not accounted for in the analysis. Sociodemographic data were limited to the accessibility of safe drinking water and type of sanitary facility in the household, neither of which were associated with microsporidiosis (data not shown). Finally, use of cross-sectional data is a major limitation because measurements obtained at a single point in time do not capture individual growth trends. Such data make it difficult to assess the effect of a particular episode of illness on growth attainment (15). To this extent, longitudinal anthropometric assessment is the only means of detecting growth faltering that results from E. bieneusi infection in childhood.

Although our results suggest an association between reduced weight gain and microsporidiosis, further studies are required to determine the role of E. bieneusi in childhood malnutrition. Longitudinal studies enabling comparison of preinfection and postinfection weights in individual children are needed to establish the direction of causation. It will be particularly useful to identify whether the period of reduced weight gain is followed by catch-up growth. Because microsporidiosis is highly prevalent in children in developing countries, the finding that the infection has a lasting effect on growth would highlight the importance of nutritional rehabilitation and provide impetus to develop therapeutics suitable for use in young children.

Dr Mor is a veterinarian and doctoral candidate at the Cummings School of Veterinary Medicine at Tufts University. She is also an instructor at the School of Medicine at the same university. Her research interests include the clinical epidemiology of E. bieneusi, Cryptosporidium spp., other tropical infections, and zoonotic diseases of global health importance.

We thank the members of the Initiative for the Forecasting and Modeling of Infectious Diseases at Tufts University and anonymous reviewers for providing constructive comments on the manuscript.

This study was supported by grant R21A1068474 from the National Institutes for Allergy and Infectious Diseases (S.M.M and S.T.) and by the University of Sydney Traveling Scholarship Fund (S.M.M.).

Microsporidiosis and Malnutrition in Children with Persistent Diarrhea, Uganda