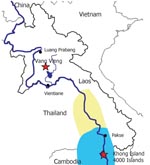 Schistosomiasis is a widely distributed intravascular trematode infection. Estimates indicate that >200 million people are infected with schistosomiasis, mainly in Africa. In Asia, 3 Schistosoma species cause human infection: S. japonicum, S. malayensis, and S. mekongi. S. mekongi endemicity is thought to be limited to a 200-km area of the Mekong River Basin, stretching from the southern tip of Laos to Cambodia (Figure) (1). However, this parasite’s intermediary host, freshwater snails (Neotricula aperta), has recently been found to be more widespread and to be advancing northwards (1,2). Attwood has suggested that S. mekongi may extend as far north as Khammouane Province in southern Laos (Figure) (1,3).

The study was conducted at the Center for Geographic Medicine at Sheba Medical Center and was approved by the institutional review board. Travel-related schistosomiasis was defined as a case of schistosomiasis confirmed by serology or ova detection in a traveler who had been exposed to freshwater in Laos. Travelers were thoroughly questioned regarding freshwater exposures during the index trip and any previous trips to schistosomiasis-endemic areas.

Stool specimens were tested for the presence of Schistosoma spp. ova (merthiolate–iodine-formaldehyde technique) at the Israel MOH and Clalit Health Services laboratories. Fisher exact test was used for categoric data and the Student t test for continuous data. Statistical significance was set at p<0.05.

During 2002–2008, 12 patients (5 male, 7 female [2 children]) had travel-related schistosomiasis acquired in Laos (Table 1). No freshwater exposures in Schistosoma-endemic areas in Asia (excluding the index trip to Laos) were reported by patients (Table 1).

Seven patients had a diagnosis of acute schistosmiasis. Fever (86%), headache (86%), urticarial rash (71%), and cough (71%) were the most prevalent acute schistosmiasis symptoms (Table 2). Four patients reported chronic gastrointestinal symptoms (abdominal pain and discomfort, diarrhea or loose stools). One patient described a pruritic papular rash that appeared hours after exposure and resolved within a few days (suspected cercarial dermatitis). The patient was asymptomatic upon evaluation at our clinic (Table 1, patient 12).

S. mekongi/japonicum ova were detected in stool samples of 1 of 7 patients who submitted such samples for ova detection (Table 1). Issues of technical proficiency and expertise precluded a definite conclusion regarding speciation according to egg size. Laboratory findings in 5 patients with acute schistosmiasis were significant for marked eosinophilia (Table 2).

All infected patients were treated with praziquantel at >12 weeks postexposure to avoid treatment failure (8). Of the acute schistosmiasis patients, 3 of the 7 required corticosteroid treatment during the acute illness.

Acute schistosmiasis, which is considered to be a hypersensitivity reaction that usually develops a few weeks after Schistosoma infection, is best studied in nonimmune travelers rather than in continuously exposed local populations. We report 7 cases of acute schistosmiasis presumably caused by S. mekongi infection acquired in Laos. Acute schistosmiasis is reportedly not a species-specific phenomenon but may develop after infection with any Schistosoma spp (8), a view strengthened by this report.

Most Schistosoma infections in travelers are acquired in Africa (8,9). In our clinic, travel-related schistosomiasis acquired outside Africa was diagnosed only in travelers exposed in Laos (8). This exposure is probably due to the popularity of water-related adventure activities among travelers to Laos.

S. mekongi–endemic areas in Laos have presumably included only the southern reaches of the Mekong River (Figure) (1,2,5). However, this assumption may reflect a serendipitous effect because schistosomiasis in Laos was first diagnosed in immigrants originating from this region. These early schistosomiasis cases led early epidemiologic surveys to the region of Khong, where most subsequent studies were performed (5,10). Since these epidemiologic surveys were conducted, S. mekongi infections acquired in northern Laos have been described only anecdotally (11–13).

In this report, we describe 4 patients with schistosomiasis apparently acquired in northern Laos (Figure) after exposure to freshwater exclusively in Vang Vieng; that is, they reported no other freshwater exposure during their visit to Laos. However, because of lack of species-specific serology and the inability to find Schistosoma ova in these patients’ stool samples, we can not determine which Schistosoma spp. caused their infection.

Most of these patients were infected during February–April, Mekong’s early low-water period, indicating a seasonal infection pattern similar to that of local populations (5). The increased risk of schistosomiasis during the late dry season should be conveyed to travelers during pretravel consultations.

Our observation of Schistosoma infection in the 4 travelers exposed exclusively in Vang Vieng has several limitations. First, the diagnosis was based on positive serology and not on ova detection. Cross-reactivity of nonhuman Schistosoma spp. with S. japonicum in serologic studies (e.g., S. sinensium or S. ovuncatum) could have caused seropositivity in our patients. Second, these 4 travelers (Table 1, patients 9–12) have visited other areas in Asia known to be Schistosoma endemic (China) or suspected to be (Vietnam, Nepal). Although travelers were thoroughly questioned regarding possible freshwater exposures, they may not have recalled minor exposures. Finally, we found no published malacologic surveys of the Vang Vieng area, and most experts regard this area as free from N. aperta, the intermediate host of S. mekongi.

In other world regions (e.g., Lake Malawi in Africa), Schistosoma-infected travelers have served as sentinels alerting local authorities to previously unsuspected foci of transmission (14). The cases of schistosomiasis in travelers thought to be exposed only in northern Laos, an area where dam building may have changed local conditions, mandates a systematic revaluation of S. mekongi distribution in Laos.

Dr Leshem is a fellow in infectious diseases at The Chaim Sheba Medical Center. His interests include travel and tropical medicine.

We thank Patricia Wilkins and Shulamit Loewenthal for their valuable assistance.