The 2003 outbreak of severe acute respiratory syndrome (SARS) generated renewed interest in coronaviruses (CoV) and the source for the SARS CoV that caused the outbreak in humans (1). Serologic studies demonstrated that the virus had not previously circulated in human populations to any large extent and suggested a source of zoonotic origin (2–4). A likely natural viral reservoir for the virus was not identified until horseshoe bats (Rhinolophus spp.) in several regions in the People’s Republic of China were demonstrated to harbor SARS-like CoVs (5). Subsequently, a number of other SARS-like CoVs, as well as CoVs from antigenic groups I and II, were identified from bats in Asia, Europe, and North America, and coronavirus antibodies were detected in African bat species (6–11). It is not surprising that a growing number of CoVs have been detected in bats. To date, >60 viral species have been detected in bats because their biodiversity (second only to rodents), high population densities, wide distribution, and ability to fly over long distances allow them to harbor and easily spread multiple infectious agents. Bats have long been known as natural hosts for lyssaviruses and more recently have been recognized as potential reservoirs for emerging human pathogens, including Ebola, Marburg, Nipah, and Hendra viruses in addition to SARS-CoV (12,13). 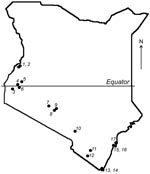 Given the association of bats with emerging infectious diseases, field surveys were performed during July–August 2006 in the southern portion of Kenya (Figure 1). The selection of sites was based on preliminary data regarding bat roost locations and observations of bats in the field during the survey. Attempts were made to collect specimens from 10–20 animals of each species present in each location. Bats were captured manually and by using mist nets and hand nets; adults and subadults of both sexes were captured. Each bat was measured, sexed, and identified to the genus or species level when possible. Blood samples and oral and fecal swabs were collected; the animals were then euthanized in compliance with field protocol. Blood, fecal swabs, and selected tissue samples were transported on dry ice from the field and stored at –80°C.

Fecal swabs (n = 221; Table) were screened for the presence of CoV RNA using 2 semi-nested reverse transcription–PCR (RT-PCR) assays. For the pan-coronavirus RT-PCR, conserved primers were designed from highly conserved regions of the RNA-dependent RNA polymerase (RdRp) gene 1b based on available CoV sequences (1st and 2nd round forward 5′-ATGGGITGGGAY TATCCWAARTGTG-3′; 1st round reverse 5′-AATTAT ARCAIACAACISYRTCRTCA-3′; 2nd round reverse 5′-CTAGTICCACCIGGYTTWANRTA-3′). For the pan–bat coronavirus RT-PCR, conserved primers were designed from the same highly conserved regions based on available bat CoV sequences and presumed to be more specific to bat coronaviruses (1st and 2nd round forward 5′-ATGGGITGGGAYTATCCWAARTGTG-3′; 1st round reverse 5′-TATTATARCAIACIACRCCATCRTC-3′; 2nd round reverse 5′-CTGGTICCACCI GGYTTNACRTA-3′). Total nucleic acids were extracted from 200 μL of a phosphate buffered saline suspension of each swab by using the QIAamp Mini Viral Elute kit (QIAGEN, Santa Clarita, CA, USA), according to the manufacturer’s instructions. The seminested RT-PCR was performed by using the SuperScript III One-Step RT-PCR kit and Platinum Tag Kit (Invitrogen, San Diego, CA, USA). The positive PCR products were purified by gel extraction by using the QIAquick Gel Extraction kit (QIAGEN) according to the manufacturer’s instructions; they were then sequenced on an ABI Prism 3130 automated sequencer (Applied Biosystems, Foster City, CA, USA), according to the manufacturer’s instructions. 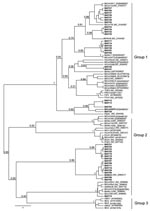 Of 221 bat fecal swabs examined, 41 (19%) were positive by at least 1 of the 2 seminested RT-PCR assays (Table). One specimen had 2 distinct CoV sequences, each amplified by 1 of the 2 PCR assays, giving a total of 42 distinct CoV sequences. To characterize the overall diversity of CoV sequences, in this study a phylogenetic tree (Figure 2) of the 121-bp fragment of RdRp was generated from 39 coronaviruses from bats in Kenya and 47 selected human and animal coronaviruses from the National Center for Biotechnology Information database based on the Bayesian Monte Carlo Markov Chain method (14). Three of the 42 sequences were not of sufficiently high quality to include in this tree. Some nodes had low Bayesian posterior probabilities (Figure 2). Longer sequences from these viruses are needed to refine their phylogenetic relationships.

These data demonstrate that the CoV diversity in bats previously detected in Asia, Europe, and North America is also present, possibly to a greater extent, in Africa. The extent of this diversity among CoVs may be shown more clearly through additional studies in bats, and increased demonstration of CoV diversity in bats may require a reconsideration of how they should be grouped. The frequency and diversity of CoV detections in bats, now in multiple continents, demonstrate that bats are likely an important source for introduction into other species globally. Understanding the extent and diversity of CoV infection in bats provides a foundation for detecting new disease introductions that may, like SARS, present a public health threat.

Dr Tong is a virologist in the Gastroenteritis and Respiratory Virus Laboratory Branch of the Division of Viral Diseases, Centers for Disease Control and Prevention. Her interests are in novel emerging CoVs.

The study was supported in part by the Global Disease Detection program (Centers for Disease Control and Prevention, Atlanta, Georgia).