A second trimester fetal demise followed influenza-like illness in early pregnancy. Influenza A virus (H1N1) was identified in maternal and fetal tissue, confirming transplacental passage. These findings suggested a causal relationship between early exposure and fetal demise. Management of future influenza outbreaks should include evaluation of products of conception associated with fetal loss.

Increased maternal illness and death appeared in early reports of influenza A pandemic (H1N1) 2009. Three pregnancy-related complications associated with pandemic (H1N1) 2009 were reported in May 2009: 1 postpartum maternal death, 1 preterm birth, and 1 early second trimester (weeks 14–20) loss (1). In April 2010, a summary of pandemic (H1N1) 2009 among 788 pregnant women demonstrated a disproportionately high risk for death; the rate of spontaneous miscarriage was 1.4%, but details were not provided (2). Correlating influenza exposure to pregnancy loss is not straightforward because first trimester miscarriage is common, second trimester loss before 24 weeks is not well studied (3), and viral identification in products of conception has rarely been attempted. We report a second trimester fetal demise that occurred after exposure to seasonal influenza A virus (H1N1) early in pregnancy.

In 2008, a 30-year-old primigravida physician experienced intrauterine fetal demise (IUFD) at 20 weeks’ gestation, as established by last menstrual period and confirmed by ultrasound at 8 weeks. The patient spent most of her pregnancy providing direct patient care. In October 2007, during gestational weeks 2–6, she was exposed to at least 2 patients with presumed influenza. She reported symptoms of fever, myalgia, headache, and cough during gestational week 4. She had no testing for influenza, did not receive antiviral therapy, and took acetaminophen; her symptoms resolved. She received the killed seasonal influenza vaccine at gestational week 6. An ultrasound at 18 weeks demonstrated early growth restriction and oligohydramnios with normal appearing fetal kidneys and head. IUFD was noted at 20 weeks.

The patient had an unremarkable medical history, did not smoke, and was normotensive throughout pregnancy. Antibodies to cytomegalovirus and toxoplasmosis were not detected. 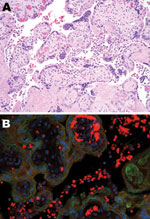 The immature placenta showed no visible abnormalities. Microscopically, histiocytes were abundant in the maternal space (chronic intervillositis) and were noted within the fetal chorionic villi (Hofbauer cells; Figure 1, panel A). Histologic analysis of fetal autopsy specimens showed scattered luminal histiocytes of the lung and gut. No other inflammatory changes or viral inclusions were identified in the placenta or fetal organs. 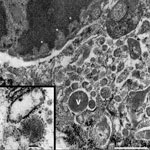 Chronic intervillositis was evident in the placental histology and has been previously described with nonspecific changes in miscarriage and recurrent pregnancy loss (4). Formalin-fixed placental tissue was imaged with electron microscopy. Histiocytes identified from the maternal intervillous space and fetal chorionic villi demonstrated characteristics of viral production (Figure 2). Several well-formed viral capsids were noted within the cytoplasm, each containing regularly spaced projections along the surface of the virion corresponding to the hemagglutinin and neuraminidase spikes.

PCR for M1 capsid protein confirmed influenza A. Immunohistochemical testing was performed on tissue from the placenta and on a sampling of fetal organs by using influenza A virus (H1N1)–specific antibody. In the placenta, stippled immunofluorescence (Figure 1, panel B) was noted in the histiocytes of the intervillous space (maternal) and fetal intravillous histiocytes. In the fetal organs, immunofluorescence for subtype H1N1 was notable in the surface epithelial cells and scattered luminal histiocytes of the fetal respiratory and gastrointestinal tracts. No immunofluorescence was noted within the fetal organs, which implied transamnionic passage of virus (amnionic fluid infection). The fetus was XY karyotype. Y-specific immunofluorescent stain with histiocyte counterstaining was performed. Because only the intravillous (fetal) histiocytes stained positively, maternal and fetal inflammatory responses were confirmed.

Several case reports document transplacental transfer of influenza virus. Yawn et al. documented influenza A transplacental transfer from the mother to amniotic fluid and fetal heart (8). Mel'nikova et al. summarized placental findings associated with influenza infections in publications from 1987 and 1994, describing perivillous and villous inflammation with concurrent amniotic fluid immunofluorescence for influenza virus (9). In another study (10), researchers from Beijing, People’s Republic of China, reported autopsy findings for 2 patients (1 of whom was 4 months pregnant) who died of avian influenza A (H5N1). Viral antigens were present in the maternal pulmonary system, and virus was detected in placental Hofbauer cells (histiocytes), cytotrophoblast, fetal lung, circulating mononuclear cells, and liver macrophages (10). Their documentation of tropism of the influenza virus to placental tissue is similar to the histopathologic features in our report. Our unexpected discovery of viral production in placental, maternal, and fetal histiocytes is another example of transplacental passage of influenza.

Miscarriage or completion of pregnancy may follow nonfatal maternal influenza infection. Adverse fetal outcomes have reportedly included congenital malformation and schizophrenia, but factors that determine these effects remain unclear (11,12). Fetal consequences of influenza exposure may be an effect of systemic inflammatory response to the infection, which could represent direct action of the virus on the placenta, the maternal–fetal interface, or the fetus. Uchide et al. reported the inflammatory response of decidual and fetal tissue in the presence of influenza virus infection and demonstrated expression of mRNA for a set of proinflammatory cytokines such as interleukin-6, tumor necrosis factor-α, and granulocyte–macrophage colony-stimulating factor, secreted in substantial amounts in response to exposure to influenza virus in vitro (13). As our case suggests, a complex interaction of maternal and fetal responses at the interface is a more likely explanation.

A total of 15%–20% of pregnancies end in spontaneous miscarriage, most before gestational week 12 (3). Approximately 50% of miscarriages are associated with chromosomal defects, which leaves many other miscarriages unexplained (14). Redline et al. examined first trimester miscarriages not associated with chromosomal abnormality, observing histologic changes of chronic intervillositis and increased perivillous fibrin (15). The mechanism of loss was thought to be related to a maternal inflammatory response to infectious antigen or an autoimmune phenomenon. Whether these findings can be extrapolated to second trimester losses is unknown. Second trimester miscarriages account for only 1%–2% of all pregnancy losses (3). Histopathologic features of these early second trimester miscarriages are not well studied, and descriptions are usually included in reports of fetal losses during 14–27 weeks, which include IUFD (>20 weeks) and miscarriage. Consequently, a direct causal relationship between influenza A and fetal demise has not been well established.

In our report, a retrospective investigation of the patient’s products of conception with ultrastructural, immunohistochemical, and molecular methods that identified subtype H1N1 implies an exposure during her first trimester. Type-specific serologic analysis was not possible because she received influenza vaccine several weeks after presumed exposure. The maternal and fetal inflammatory responses (chronic intervillositis) after placental infection may have reduced villous surface area for oxygen and nutrient transport, resulting in growth restriction and ultimately second trimester loss.

Investigation of the effects of influenza in early pregnancy is needed to evaluate potential pathophysiological relationships between maternal exposure, infection, and fetal loss or adverse outcome. During the 2009–10 influenza pandemic, the Centers for Disease Control and Prevention (Atlanta, GA, USA) collected information from populations exposed to and infected with pandemic (H1N1) 2009 virus. Products of conception were not included among the samples cataloged. We recommend that future influenza outbreak evaluations of women exposed to influenza with first or early second trimester pregnancy loss include collections of placental and fetal tissue samples.

Dr Lieberman is a clinical assistant professor at the University of Michigan Health System. His research interests include ultrastructural studies of placental chronic villitis and the use of high-resolution digital colposcopy in the evaluation of women with abnormal PAP smears.

Internal funding was provided by the University of Michigan Medical School, Department of Pathology, through the Anatomic Pathology Project Funding Committee.

Page created: June 30, 2011
Page updated: June 30, 2011
Page reviewed: June 30, 2011
The conclusions, findings, and opinions expressed by authors contributing to this journal do not necessarily reflect the official position of the U.S. Department of Health and Human Services, the Public Health Service, the Centers for Disease Control and Prevention, or the authors' affiliated institutions. Use of trade names is for identification only and does not imply endorsement by any of the groups named above.