In Taiwan, despite a substantial decline of Salmonella enterica serotype Choleraesuis infections, strains resistant to ciprofloxacin and ceftriaxone persist. A self-transferable blaCMY-2-harboring IncI1 plasmid was identified in S. enterica serotypes Choleraesuis, Typhimurium, Agona, and Enteritidis and contributed to the overall increase of ceftriaxone resistance in salmonellae.

Salmonella enterica serotype Choleraesuis usually causes invasive infection (1). When resistant Salmonella infection is encountered, fluoroquinolones or extended-spectrum cephalosporins are frequently used (2). Fluoroquinolone resistance has been common in this invasive serotype (3). Isolation of SC-B67, a strain of S. enterica ser. Choleraesuis that was resistant to ciprofloxacin and ceftriaxone (CIPr/CROr), has exacerbated the problem (4). Ceftriaxone resistance in SC-B67 was attributed to a plasmid-mediated blaCMY-2, located on a specific ISEcp1-blaCMY-2-blc-sugE structure (4). This conserved DNA fragment, subsequently named Tn6092 (5), has been reported from different geographic areas and is widely distributed among various Salmonella serotypes and other Enterobacteriaceae (6). 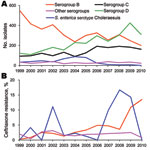 Figure 1. Secular trends in annual numbers (A) and rates (B) of ceftriaxone resistance among various serogroups or serotype of nontyphoidal Salmonella enterica isolates in Chang Gung Memorial Hospital, 1999–2010.

Since 1999, computerized records of bacterial culture results have been stored at Chang Gung Memorial Hospital, a 3,500-bed medical center in northern Taiwan. Periodic review of these records indicated a reverse trend in the prevalence of serogroups D (increase) and B (decrease) isolates during the past decade (Figure 1, panel A). A significant decrease in the prevalence of S. enterica ser. Choleraesuis was also evident (Figure 1, panel A). Nevertheless, in recent years, ceftriaxone resistance has increased from <5% to >10% in S. enterica ser. Choleraesuis and in serogroup B salmonellae (Figure 1, panel B).

Since isolation of SC-B67 in 2002 (4), 10 CIPr/CROr S. enterica ser. Choleraesuis isolates have been recovered. All CIPr/CROr isolates were resistant to nalidixic acid and ciprofloxacin, but SC-B134 remained susceptible to ciprofloxacin (Table 1). PCR and sequencing with specific primers (Technical Appendix Table 1) revealed 3 identical amino acid changes in GyrA and ParC among all CIPr/CROr isolates except SC-B134 (Table 1). Reduced fluoroquinolone susceptibility of SC-B134 could be explained by the single amino acid change at codon 87 of GyrA. Amino acid changes were not found in GyrB or ParE.

In terms of clinical features (Technical Appendix Table 2), most patients with these infections were adults who had a wide spectrum of underlying diseases. Antimicrobial agents were prescribed for all patients, and extended-spectrum cephalosporins were used most frequently. Two patients died. Seven blood isolates from the 10 patients with CIPr/CROr S. enterica ser. Choleraesuis infections, together with the ceftriaxone-resistant isolates noted below, were investigated further. SC-B67 was used as a reference. 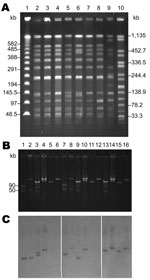 Ceftriaxone resistance was investigated by using PCR and sequencing as described (6). The specific blaCMY-2-carrying Tn6092 was present in all isolates tested (Table 1). Tn6092 was located within a finQ gene at a position identical to that in SC-B67. The only difference was in SC-B134; a 1,338-bp insertion sequence, IS10, was inserted 262 bp upstream of the blaCMY-2. No CTX-M and SHV genes were found in these isolates.

Using an alkaline lysis method (8), we found various numbers of plasmids among the isolates studied (Table 1). DNA–DNA hybridization indicated that Tn6092 was located on large (85-kb to 150-kb) plasmids (Table 1) (9). An identical Rep_3 replicon was found in all CIPr/CROr S. enterica ser. Choleraesuis isolates studied (5). Similar to SC-B67, the Rep_3 replicon was located on the Tn6092-harboring resistance plasmid in the 5 resistant isolates recovered before 2004 (Table 1). However, in SC-B134, the Rep_3 replicon was found on the smaller 40-kb plasmid, and in SC-B136, the Rep_3 replicon was on the 115-kb large virulence plasmid that contained the spvC gene (Table 1; Figure 2, panels B, C). Replicons FIIA and FIB were simultaneously present in all the spvC-containing virulence plasmids among the S. enterica ser. Choleraesuis isolates studied (Table 1). Virulence plasmids in the 2 recent isolates, SC-B134 and SC-B136, appeared larger than those in earlier isolates, including SC-B67 (Table 1; Figure 2, panels B, C). The 2 bands demonstrated by the spvC probe in SC-B134 were from the same single virulence plasmid, as proven by hybridization experiments on BamHI-digested plasmid DNA of SC-B134 (data not shown).

Replicon typing through a published multiplex PCR system revealed a replicon I1 from the Tn6092-harboring resistance plasmids in SC-B134 and SC-B136 (Table 1; Figure 2, panel C) (10). Similarly, Tn6092-carrying plasmids among the other ceftriaxone-resistant salmonellae isolates all belonged to the IncI1 group (Table 1). Conjugation experiments using a filter mating method showed that all IncI1 resistant plasmids were self-transferrable (11). With azide-resistant Escherichia coli J53 and S. enterica ser. Typhimurium LBNP4417 as the recipients, the IncI1-resistant plasmids were confirmed to be self-transferrable.

Subtyping of the 8 conjugated IncI1 plasmids was achieved by using a recently described plasmid multilocus sequence typing (pMLST) method specifically set up for IncI1 plasmids (12). Six combinations of allele variants were obtained (Table 2). Because these pMLST patterns differed from those reported elsewhere, 6 new sequence types (STs) were designated (Table 2). Two major groups were further derived: ST54 (pSB28, pSB193) and ST52 (pSC-B136) that differed only in trbA, and ST56 (pSD166, PSB105) and ST53 (pSB5) that only differed in pilL (Table 2). pMLST patterns of representative blaCMY-2-carrying IncI1 plasmids published in recent years (Table 2) were derived from E. coli or various Salmonella serotypes in Europe or North America (12–14). Nine STs and 2 major clonal complexes, CC-2 and CC-12, were observed. pMLST patterns found in the present study differed from these STs by at least 3 alleles (Table 2).

Resistance to ciprofloxacin and ceftriaxone remains high, indicating persistence of antimicrobial drug–resistant traits in S. enterica ser. Choleraesuis. The conserved genotypes found in the clinical isolates suggest a mode of clonal dissemination. However, plasmid analysis indicates that the location of the Tn6092-containing resistance element had shifted from the nonconjugative Rep_3 plasmids in early isolates to the self-transferable IncI1 plasmids in recent isolates. The emergence of such self-transferable resistance plasmids seems to provide an efficient way for S. enterica ser. Choleraesuis to spread its ceftriaxone resistance trait.

Because infections with nontyphoid salmonellae are rampant in Asia, emergence of a conjugative IncI1 resistance plasmid in ceftriaxone-resistant salmonellae from an Asian country is of public health concern. Presence of blaCMY-2-carrying IncI1 plasmids in a variety of Salmonella serotypes has been reported, but to our knowledge, not in S. enterica serotypes Enteritidis or Choleraesuis (12–14). IncI1 plasmids of the same or similar STs have been found in isolates of different bacterial species; with different resistance genes; or from different countries or sources, including human, animals, and the environment (12–15). Emergence of the IncI1 plasmid in Taiwan represents a need for continuous efforts to monitor and control its further spread.