An increase in prevalence of multidrug-resistant Acinetobacter spp. in hospitalized animals was observed at the Justus-Liebig-University (Germany). Genotypic analysis of 56 isolates during 2000–2008 showed 3 clusters that corresponded to European clones I–III. Results indicate spread of genotypically related strains within and among veterinary clinics in Germany.

Within the genus Acinetobacter, A. baumannii is clinically the most relevant species, frequently involved in hospital outbreaks and affecting critically ill humans (1,2). The strains involved are usually multidrug resistant, which limits therapeutic options (3). Many outbreaks in Europe and beyond have been associated with the European clones I–III (4–6).

Nosocomial infection in veterinary medicine is an emerging concern. The role of acinetobacters in diseases of hospitalized animals is largely unknown. Recent reports have documented occurrence of or infection with Acinetobacter spp., including A. baumannii, in hospitalized animals (7,8). The internal laboratory records of the microbiology department of the Giessen Veterinary Faculty (Institute for Hygiene and Infectious Diseases of Animals, Giessen, Germany) noted an increase in antimicrobial drug–resistant Acinetobacter isolates. To assess the species and type diversity of these organisms, we investigated a set of isolates from Giessen and other veterinary clinics obtained during a 9-year period by a combination of genotypic methods and compared the isolates for their susceptibility to antimicrobial drugs.

The Institute for Hygiene and Infectious Diseases of Animals in Giessen receives samples for investigation from other veterinary departments of the university (mainly referral clinics) and from external veterinary clinics throughout Germany. During 2000–2008, Acinetobacter spp. were obtained from 137 hospitalized animals. From these animals, 56 isolates were selected for further characterization. The selection was made to reflect the diversity in epidemiologic origin of the collection regarding date of isolation, animal species, specimen, and veterinary clinic (82% from Giessen) (Table A1). Only isolates with possible clinical significance were included as inferred from the fact that they were the only or the dominating agent within the sample. Furthermore, according to data from the diagnostic laboratory, the selected isolates were highly resistant.

Confirmatory susceptibility testing of isolates was conducted by using the Clinical Laboratory Standards Institute broth dilution method (9) (Table). For precise species identification, amplified ribosomal DNA restriction analysis was performed. By this method, the 16S rDNA sequence was amplified by using PCR, followed by restriction of the amplified fragment by 5 restriction enzymes: CfoI, AluI, MboI, RsaI, and MspI. The combination of electrophoretic patterns of the respective enzymes was compared with a library of profiles (10).

Fifty-two isolates were identified as belonging to A. baumannii and 3 to A. pittii (Acinetobacter gen. sp. 3) (11); 1 with a yet undescribed profile remained unclassified. Amplified fragment length polymorphism (AFLP) DNA fingerprint analysis was performed as described for confirmative species identification, for strain typing, and for clone identification (4,12,13). Briefly, EcoRI and MseI were used to generate restriction fragments that were selectively amplified by using a Cy-5–labeled Eco-A and an Mse-C primer. Amplification products were separated by electrophoresis and subjected to cluster analysis with the BioNumerics software package 5.1 (Applied Maths, St-Martens-Latem, Belgium). For species identification, isolates were compared with reference strains of all described Acinetobacter species included in the Leiden University Medical Center AFLP database (Leiden, the Netherlands). Isolates with profiles >50% similar were considered to belong to the same species (1).

To assess the type diversity of the organisms, isolates were typed by pulsed-field gel electrophoresis (PFGE) (14) and by AFLP analysis. For PFGE, DNA was digested with the restriction endonuclease ApaI. Digitized profiles were analyzed with the BioNumerics software. For AFLP typing, a subset of 27 isolates was analyzed (Table A1). The profiles obtained were compared with each other and with those of the Leiden database, including those of the European clones I–III. A similarity cutoff level >80% was used to delineate members of the same clone and >90% to delineate organisms related at the strain level (4,12,13).

Figure 1. Computer-assisted cluster analysis of pulsed-field gel electrophoresis fingerprints of 53 Acinetobacter baumannii and 2 Acinetobacter spp. pittii isolates. COL 20820 was used as the reference standard for normalization of the digitized...

For PFGE, at a similarity level of 86%, 3 major clusters (A, B, and C) and 6 unique isolates were distinguished (Figure 1). Within major cluster C, 2 main subclusters (C1 and C6) and 4 single profiles (C2–C5) were observed at 97% similarity (Table A1; Figure 1). Despite some band differences, the patterns in major cluster C were strikingly similar. The maximum number of band differences in subcluster C1 was 3, which indicates that the organisms were genetically closely related. In subcluster C6, only minor differences in size of the fragments were observed (Figure 1). 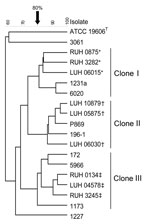 The occurrence of PFGE type C in different animals admitted to 3 different clinical wards of the Justus-Liebig-University Giessen over 9 years might indicate endemic occurrence of these organisms on these wards. Survival in the hospital environment (15), patient-to-patient transfer, and transfer from 1 animal clinic to another may have contributed to their persistence and spread. Because veterinarians, stockmen, and students rotate between the various clinics and departments, transmission by hands or equipment should be considered. Frequent transport of colonized animals to and from shared examination rooms, e.g., for computer-assisted tomography, might also have contributed to the chain of spread. Because type C isolates also were found in samples from animal clinics throughout Germany (Table A1), limited genetic variation in animal strains of A. baumannii also is possible.

AFLP data were, further to comparative typing of the animal isolates, also used to assess the relatedness of the isolates in our study to those of the widespread European clones I–III that represent genetically related but not identical strains that are frequently multidrug resistant and associated with epidemic spread in human clinics (1,4–6). Although not all strains were characterized by AFLP, we conclude by inductive generalization of results that the findings apply to all isolates of the PFGE types from which the organisms were selected. Thus, a large proportion of the animal A. baumannii isolates were genetically congruent with the European clone I, II, or III. Occurrence of such isolates in ill, hospitalized animals of various species might indicate that, as in human medicine, A. baumannii is an emerging opportunistic pathogen in veterinary medicine. The occurrence of clones I–III in animals and humans also raises concern about whether the organisms can spread from animals to humans or whether the animals have acquired the organisms from humans.

The occurrence of genotypically related, antimicrobial drug–resistant A. baumannii strains in hospitalized animals suggests that these organisms are most likely nosocomial pathogens for animals. If so, veterinary clinics face a great challenge regarding prevention, control, and treatment of infections with these organisms, similar to situations in human hospitals. Finally, the possibility of spread from humans to animals or vice versa requires special attention.

Dr Zordan is a research associate at the Institute for Hygiene and Infectious Diseases of Animals, Justus-Liebig-Universität Giessen in Germany. Her primary research interests include the significance of A. baumannii for animals and the epidemiology of this species in veterinary medicine.

The work was supported by a grant from the Akademie für Tiergesundheit e. V.