To assess molecular evolution of the respiratory syncytial virus (RSV) fusion gene, we analyzed RSV-positive specimens from 123 children in Canada who did or did not receive RSV immunoprophylaxis (palivizumab) during 2006–2010. Resistance-conferring mutations within the palivizumab binding site occurred in 8.7% of palivizumab recipients and none of the nonrecipients.

Human respiratory syncytial virus (RSV) is the most common cause of acute respiratory tract infections (RTIs) and a major cause of hospital admission and death among children <5 years of age worldwide (1). Risk for severe RSV-associated illness is highest among children born prematurely or with chronic medical disorders (2). Palivizumab immunoprophylaxis is the only available measure to prevent severe RSV disease.

The RSV fusion (RSV-F) surface glycoprotein mediates virus fusion to host cells. It is a major antigenic determinant that elicits neutralizing antibodies and cytotoxic T-lymphocyte immunity (3). Palivizumab (MedImmune, Gaithersburg, MD, USA) is a humanized mouse monoclonal antibody that inhibits RSV-F by binding to a defined epitope (residues 262–276) (4,5). Palivizumab immunoprophylaxis is recommended for the prevention of serious lower RTIs caused by RSV in children at high risk (6). RSV strains with mutations in key amino acid residues within the palivizumab binding site are resistant to this antibody (7–9); however, little is known about the prevalence of such mutations in clinical samples. Furthermore, despite its role in RSV pathogenesis, immunity, and prevention strategies, few data on RSV-F molecular evolution are available (10,11) because previous phylogenetic studies have focused on the RSV-G glycoprotein (12,13). Therefore, we monitored evolutionary changes in RSV-F, particularly potential resistance mutations in the palivizumab binding site, among strains from children who did and did not receive palivizumab.

This cohort study was approved by the Centre Hospitalier Universitaire de Québec Research Ethics Board. Participants were <3 years of age and either received medical attention at an outpatient pediatric clinic or were hospitalized at a pediatric center for acute RTI during 4 winter seasons (2006–2010), in Québec City, Québec, Canada.

Clinical data were prospectively collected at study entry and after 1-month follow-up. For all patients, at the first visit a nasopharyngeal aspirate was collected. The aspirate was frozen at −80°C until subsequent testing by a multiplex PCR/DNA hybridization assay that detects RSV genotype-A (RSV-A), RSV-B, and 22 other respiratory viruses (Infiniti RVP assay; Autogenomics, Carlsbad, CA, USA) (14).

Along with the newly generated nucleotide sequences from the 123 children (23 palivizumab recipients; 100 nonrecipients), we analyzed 92 clinical RSV-F sequences provided by other investigators (10,11) or available from GenBank. Palivizumab exposure was unknown for these samples, and all originated outside Canada. We also included 10 unpublished RSV-F sequences from a 2004–2005 study of palivizumab recipients in Canada (15). Multiple-sequence alignment was performed with ClustalW in MEGA5 (www.megasoftware.net). A 1,524-bp region (positions 79–1602 in the prototype A2 and B1 RSV-F genes) was translated into amino acid sequences, and the palivizumab binding site (residues 262–276) was assessed for variations. We removed 55 redundant (identical) nucleotide sequences. The final dataset comprised 170 unique sequences, including 89 that were newly generated in this study (GenBank accession nos. JF776691–JF776779). 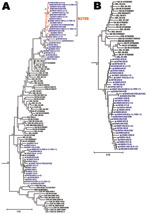 Figure. Phylogenetic analysis of 170 near–full-length unique respiratory syncitial virus fusion (RSV-F) gene sequences (nt 79–1602). Panels A and B are detailed phylograms of the RSV-A and RSV-B taxa analyzed, respectively. One...

Phylogenetic reconstructions were computed in MEGA5 (Figure). Strains from Canada tended to group together. However, this segregation likely reflects temporal evolution rather than geographic influence because all RSV-F sequences originating from other countries were collected >10 years ago. Previous RSV-G studies have demonstrated concurrent circulation of related lineages in distant areas (13). Overall, RSV-F was highly conserved (Table 1). RSV-A exhibited more genetic diversity than RSV-B. This difference may reflect sampling bias because more RSV-A sequences originating from diverse locations and years were available; however, the greater genetic diversity of RSV-A compared with RSV-B has also been observed in a study conducted in South Korea (10).

Of the 23 RSV-F amino acid sequences from patients who received palivizumab (Table 2), 2 exhibited a mutation at residue 272 (K272Q, K272M), whereas no such mutations were identified in the other 100 strains obtained from those who did not receive palivizumab (8.7% versus 0%; p = 0.03, by Fisher exact test). A sublineage of RSV-A, noteworthy for an N276S substitution in the palivizumab binding site, emerged during 2008–2009 (8 [44%] of 18 RSV-A strains) and became the predominant RSV-A clade during 2009–2010 (25 [100%] of 25 strains) in palivizumab recipients and nonrecipients. This N276S lineage was detected in all 3 Canadian communities studied. No sequences from GenBank or other studies (10,11) harbored any palivizumab binding site mutation.

Microneutralization assays were performed as described elsewhere, with minor modifications (9). RSV was incubated (for 2 h at 37°C) with serially diluted palivizumab, then cultured in Vero cells (for 5 d). RSV replication and 50% inhibitory concentrations (IC50) were subsequently determined by F protein quantification by using ELISA. The mean ± SD IC50 of C0910–1006A, a N276S strain, was 0.33 ± 0.04 µg/mL, similar to that of RSV-A2 wild type (IC50 0.46 ± 0.04 µg/mL) and therefore was considered susceptible. Position-272 variants did not grow in culture and were not tested.

We report the prevalence of resistance-conferring mutations in RSV-F among children receiving or not receiving palivizumab. Although infrequent (8.7% of infections in palivizumab recipients), residue 272 mutations were significantly associated with palivizumab exposure and not observed at all in nonexposed patients.

We identified 2 new clinical specimens with position 272 mutations (K272Q and K272M). We cannot exclude the possibility that additional specimens contained mixed viral populations with minor proportions of position-272 mutants not detectable by conventional sequencing methods. Changes at this position (from lysine to asparagine, glutamine, glutamic acid, methionine, or threonine) have produced palivizumab resistance in vitro (9) and in a cotton rat model (7). As previously reported, 1 (10.0%) of 10 sequences from our 2004–2005 study of palivizumab patients carried a 272 mutation (K272E) (15). The K272E substitution is the only substitution also demonstrated to confer resistance to motavizumab, an enhanced-potency monoclonal antibody developed by affinity maturation of palivizumab (9). We could not perform neutralization assays on position-272 variants because they did not grow in culture. This finding suggests that such changes adversely affect viral replicative capacity (7,9).

From 3 Canadian communities we detected a lineage harboring an N276S mutation in 44.4% of RSV-A sequences from 2008–2009 and 100% from 2009–2010, unrelated to palivizumab exposure. Adams et al. have proposed that N276S led to palivizumab resistance in a clinical specimen (8). However, that sample also comprised a K272E subpopulation. Our microneutralization assay results and unpublished neutralization data using recombinant viruses and clinical isolates (Q. Zhu, pers. comm.) suggest that N276S does not confer resistance.

Dr Papenburg is a pediatric infectious disease specialist and medical microbiologist who performed this work during a fellowship at the Centre de Recherche en Infectiologie de l’Université Laval. His clinical practice is now at the Montréal Children’s Hospital, McGill University. His research interests include the clinical epidemiology and molecular virology of childhood respiratory tract infections.

This study was supported by the Canadian Institutes of Health Research and a research grant from Abbott Laboratories Ltd.