An outbreak of fever associated with myalgia and myositis occurred in 2012 among 89 of 92 college students and teachers who visited Pangkor Island, Malaysia. The Sarcocystis nesbitti 18S rRNA gene and sarcocysts were obtained from muscle tissues of 2 students. Our findings indicate emergence of S. nesbitti infections in humans in Malaysia.

Sarcocystis spp. infections are emerging parasitic infections among travelers to potentially disease-endemic areas of Southeast Asia. More than 100 travelers acquired an acute, muscular, Sarcocystis spp. infection–like illness while traveling to and from Tioman Island, Malaysia, during 2011–2012 (1). Several cases were histologically confirmed by detection of intramuscular sarcocysts. Before these reports associated with travel to Tioman Island, <100 cases of intramuscular infection with Sarcocystis spp. had been reported (2–4) in humans. Earlier studies with tongue tissues obtained in an autopsy series suggested an infection prevalence of ≤21% among Malaysians (5). However, routine diagnostic examination of >1,500 limb muscle biopsy specimens in the past 20 years for various muscle diseases at the University of Malaya Medical Centre did not yield any sarcocyst-positive tissues (K.T. Wong, unpub. data). This finding suggests that human infection with Sarcocystis spp. is rare or that most of the infections are silent, mild and self-limited (6), or under-recognized.

There are >100 Sarcocystis spp. known and most have been isolated from muscle tissues of various intermediate hosts, including mammals, birds, and reptiles. Sarcocystis spp. are parasites with dual hosts to accommodate their dual life cycles. The sexual reproductive stage occurs in the definitive host, which appears to be relatively species constrained. During this stage, parasite activity is limited to the intestinal tract. In contrast, the asexual reproductive stage occurs in the intermediate host and appears to be relatively less species constrained. This stage occurs in the vascular endothelium and culminates in formation of mature muscle sarcocysts (6). However, Sarcocystis spp. infections in humans as the accidental intermediate host have been reported as intramuscular sarcocysts of unknown species (7).

An outbreak investigation was undertaken after 89 symptomatic persons from Malaysia came to our institute after a college retreat during January 17–19, 2012, on Pangkor Island, Malaysia (4°13′52.35′′N, 100°32′44.55′′E). Ninety-two persons attended the retreat, which was held in a small hotel on the coast of the island; all outdoor activities were conducted on the beach or in the ocean. Eighty-nine symptomatic case-patients were identified with onset of fever (94%), myalgia (91%), headache (87%), and cough (40%) ≤26 days upon return. In persons who had a fever, the fever had a relapsing-remitting nature in 57% of patients.

Investigation by using magnetic resonance imaging (MRI) was prompted by development of visible swelling of the face in 9 patients and swelling of the calf muscles in 4 patients. Eight patients who had facial swelling and myalgia for 4–6 weeks underwent whole-body MRI by using the 1.5T Signa HDx MR System (GE Healthcare, Pittsburgh, PA, USA). All 8 patients showed changes in muscles of mastication, including superficial temporalis and deep temporalis, and in masseter muscles. Abnormalities were also observed in back muscles in 4 patients and in calf muscles in 2 patients. Muscle affected showed asymmetric high signal intensities on T2-weighted short T1 inversion recovery, consistent with inflammatory edema. A biopsy specimen was obtained from the temporalis muscle of 1 of these patients. Two leg muscle biopsy specimens were obtained from 2 other patients who reported specific muscle pain and had changes consistent with myositis by MRI. Mild myositis (inflammation) was observed in 3 muscle biopsy specimens examined.

Muscle tissues were ground with sterile glass beads by using a Precellys 24 homogenizer (Bertin Technologies, Montigny le Bretonneux, France) at 5,500 rpm for 30 s. Ten microliters of homogenates was inoculated into various cell cultures for virus isolation. Virus was not isolated from homogenates. RNA and DNA were also extracted from tissue homogenates by using the QIAamp Viral RNA Mini Kit and QIAamp DNA Mini Kit (QIAGEN, Hilden, Germany), respectively. PCR amplification for detection of infectious agents was performed. No specific amplification was obtained by using available primers for commonly detected viruses, including alphaviruses and other arboviruses. However, a Sarcocystis sp.18S rRNA gene was detected by using 5 primer pairs described (8). 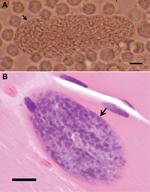 Typical sarcocysts (length ≈190 µm) were observed in cell cultures inoculated with the muscle tissue homogenates of 1 of the patients (Figure 1, panel A) and directly in the muscle tissue of another patient (Figure 1, panel B). Attempts were made to culture sarcocysts from muscle tissue homogenates in U937 and THP-1 human monocytic cell lines but no propagation of bradyzoites was obtained. Nucleic acid amplification of the 2 tissue samples consistently showed DNA fragments with expected sizes of 329–1,208 bp. One tissue sample was from the temporalis muscle of 1 patient, and the other was from the leg muscle of another patient.

Both patients reported relapsing-remitting fever (3 episodes each), myalgia, and headache. Despite the presence of myositis, neither patient had increased serum creatinine phosphokinase levels but did have increased eosinophil counts of 1.0–2.6 × 109 cells/L (reference range 0.02–0.50 × 109 cells/L). 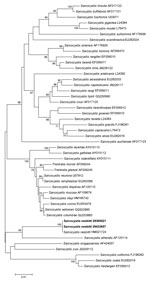 DNA sequences obtained from 1,812-bp fragments were compared with fragments in GenBank by using BLAST (http://blast.ncbi.nlm.nih.gov/). Sequences matched 100% of those reported as Sarcocystis nesbitti (9). A phylogenetic tree constructed by using sequences S. nesbitti MY29365821 (GenBank accession no. HF544323) and S. nesbitti MY29433657 (accession no. HF544324) and those available in GenBank placed the 2 sequences in the clade with S. nesbitti and S. atheridis (9) (Figure 2).

There have been several reports of Sarcocystis spp. infection in Malaysia and of tourists who had traveled to Malaysia (1,2,5,10–13). However, the Sarcocystis species was not identified in any of these reports. Only S. hominis and S. suihominis have been identified as the cause of human infections. In these instances, infections were believed to be asymptomatic, although minor self-limiting gastroenteritis was possible. Humans are definitive hosts for both species but only intestinal infections (no intramuscular sarcocysts) have been observed (6).

We report symptomatic S. nesbitti infection in humans. Predominant manifestations were fever (relapsing in ≈50% of patients), myalgia, headache, and cough. Although only 2 patients were confirmed to be acutely infected with S. nesbitti, it was likely that the remaining students and teachers in the group had the same infection because nearly all had similar signs and symptoms with onset of illness within days of each other. In addition, 9 patients had a distinctive facial myositis, but sarcocysts could not be verified in all of them because only 3 patients agreed to provide a muscle biopsy specimen. No other microorganisms were isolated from cell cultures of blood or other body fluids of patients.

S. nesbitti was reported by Mandour in 1969 in skeletal muscles of Macaca mulatta monkeys (14). Its presence in M. fascicularis monkeys, but not in humans, was reported in China by Yang et al. (15). Similar to infection in monkeys, it is likely that humans are also accidental intermediate hosts. Its definitive host is still unknown but earlier phylogenetic analysis suggests that snakes could be a probable definitive host (9). Our findings highlight the emergence of S. nesbitti infections in humans and suggest that these infections might be endemic to Malaysia.

Dr AbuBakar is a scientist in the Department of Medical Microbiology at the University of Malaya, Kuala Lumpur, Malaysia. His research interest is use of molecular methods to identify emerging infectious agents.