Detection of Mixed Infections with Plasmodium spp. by PCR, India, 2014

In 8 malaria-endemic states in India, mixed Plasmodium spp. infections were detected by PCR in 17.4% (265/1,521) of blood samples that microscopy had shown to contain only P. falciparum. The quality of microscopy must be improved because use of PCR for detection of malaria parasites is limited in rural areas.

Five Plasmodium species (P. falciparum, P. vivax, P. malariae, P. ovale, and P. knowlesi) cause human malaria. Malaria is not uniformly distributed in India; 8 of the 35 states and union territories contain most malaria cases (1). Infections with P. falciparum and P. vivax occur at approximately equal frequencies (2–4). This finding increases the possibility of mixed infections, as reported in other countries, such as Peru (5), Papua New Guinea (6), Brazil (7), and Ethiopia (8).

In India, malaria control usually involves vector control with indoor residual spraying of insecticides and insecticide-treated bed nets, and chemotherapy with artemisinin-based combination therapy. Malaria diagnosis is based mainly on microscopic detection of parasites in peripheral blood smears from symptomatic persons. In addition, bivalent, rapid diagnostic tests (RDTs) are useful detection tools (9) but cannot differentiate P. falciparum moninfections from co-infections with other Plasmodium species (2,3). Moreover, genetic polymorphisms in diagnostic antigens limits detection by monoclonal antibodies. Misdiagnoses might also arise from gene deletions that prevent expression of proteins by the parasite (10). We report that a high proportion of mixed infections with 4 Plasmodium species detected by PCR in 8 states of India to which malaria is highly endemic were not detected by bivalent RDTs and microscopy.

This study was approved by the Institutional review board of the National Institute for Research in Tribal Health (Jabalpur, India). Written informed consent was obtained from all participants or parents of children, according to Indian Council of Medical Research guidelines. 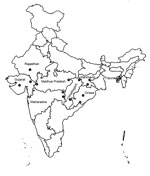 The study was conducted in 2 community health centers (CHCs), 1 in an area that had a high level of malaria endemicity and 1 that had a low level of malaria endemicity, in each of 8 states in India: Orissa, Chhattisgarh, Jharkhand, Maharashtra, Madhya Pradesh, Tripura, Gujarat, and Rajasthan (Figure 1; Table 1). Selected CHCs were located in different regions, and forest areas in these regions ranged from 13% in Jhabua (Madhya Pradesh) to 81% in Tripura. Elevation above sea level ranged from 13 m in Valsad (Gujarat) to 870 m in Koraput (Orissa). Inhabitants of most study areas were ethnic tribes (39%–87%). All areas had received 2 rounds of indoor residual spray (DDT/synthetic pyrethroid) as a vector control measure.

Blood samples were collected from persons with suspected malaria during July–December 2014 at malaria clinics in CHC hospitals at 15 sites. Microscopy and RDTs (Bioline Ag Malaria Pf/Pv Test; Standard Diagnostics Inc., Gyeonggi-do, South Korea) were performed at outpatient department clinics of CHCs, and molecular diagnosis (PCR and sequencing) was performed at the molecular parasitology laboratory at the National Institute for Research in Tribal Health.

For microscopy, thick and thin blood smears were prepared from finger prick blood samples, which were air-dried, fixed in methanol, and stained with Giemsa. A total of 100 thick blood smear fields were examined by using an oil immersion lens at 100× magnification before a sample was considered negative. Malaria parasite density was determined from thick blood smears by counting the number of parasites against 200 leukocytes (11). Microscopy was also performed on samples that had negative results by RDT. Blood smears were cross-checked by a senior laboratory technician. RDT was performed according to manufacturer’s instructions (9) and was repeated for samples in which discordant results were obtained (e.g., microscopy positive, RDT negative).

Genomic DNA was isolated from samples that microscopy showed to contain only P. falciparum by using the QIAamp DNA Blood Mini Kit (QIAGEN, Hilden, Germany). Species-specific nested PCRs that targeted the 18S rRNA gene were used to detect 4 malaria parasite species (P. falciparum, P. vivax, P. ovale, and P. malariae) (12). P. knowlesi was detected by using a set of primers specific for the 18S rRNA gene (13), and differentiation of 2 subspecies of P. ovale (P. curtisi and P. wallikeri) was performed as described (4). PCR primers and conditions are shown in Table 2. An independent research assistant, who was unaware of microscopy or RDTs results, performed PCR on coded samples.

Figure 2. Identification of Plasmodium spp. by nested PCR at 15 community health centers in 8 states in India to which malaria is endemic. A) Plasmodium falciparum (205-bp fragment). Lane 1, molecular mass...

This study was conducted 8 states in India that contain 80% of malaria cases (85% of which are caused by P. falciparum) and 70% of deaths caused by malaria in the entire country (1). Misdiagnosis by microscopy occurs because in mixed infections there is a tendency of 1 parasite to predominate and microscopy usually does not detect low numbers of other parasites (6). Thus, rare malaria parasites and mixed infections are underestimated through routine microscopy and RDTs (2–6), and misidentification of malaria parasites could prolong parasite clearance time and lead to anemia and drug resistance (14). A high proportion of mixed infections with P. vivax and P. falciparum have been reported in India (15). However, in that study, Gupta et al. did not look for P. malariae or P. ovale and their sample size was small (180 persons).

Our results highlight the role of mixed infections, particularly those with P. vivax, P. malariae, and P. ovale, which are not detected accurately by microscopy or RDTs. Although P. vivax and P. ovale are responsible for relapses (4), P. malariae is sustained at low rates among sparse and mobile human populations for decades, thus facilitating transmission by mosquitoes (2). Our results also emphasize a major concern in the diagnosis of malaria by microscopy or RDTs and has serious repercussions for malaria epidemiology and subsequent control. These findings indicate the need to improve quality of microscopy and RDTs because PCR techniques are expensive. Until PCR becomes much less expensive and more available as a point-of-care test for field testing, its use will be limited for malaria detection.

Mr. Krishna is a senior research fellow at the National Institute for Research in Tribal Health, Jabalpur, India. His research interest is molecular characterization of malaria parasites.

We thank all study participants and their relatives for providing informed consent and staff of 15 CHC hospitals, particularly medical officers, for their help and support.

This study was supported by the Indian Council of Medical Research, New Delhi, India.

Detection of Mixed Infections with Plasmodium spp. by PCR, India, 2014