To the Editor: Porcine deltacoronavirus (PDCoV) was discovered in 2012, during a study to identify new coronaviruses in mammals and birds in Hong Kong (1). In February 2014, this novel porcine coronavirus was detected in pigs in Ohio, United States (2), and has since been reported in at least 17 US states (3–5). Concern regarding the epidemiology, evolution, and pathogenicity of this emerging virus is increasing. Recently, PDCoV was identified in South Korea (6). We report PDCoV in mainland China.

Since December 2010, a large-scale outbreak of diarrhea in suckling piglets has occurred on swine farms in mainland China (7). The causative agent was considered to be a variant of porcine epidemic diarrhea virus (PEDV) (8), and the role of PDCoV in the outbreak was not investigated at that time.

Using 2 pairs of specific primers to detect PDCoV, as described by Wang et al. (2), we tested 215 intestinal or fecal samples collected at various times during 2004–2014 from piglets with clinical diarrhea in Anhui, Guangxi, Hubei, and Jiangsu provinces, mainland China (Technical Appendix Table 1). All samples were submitted from commercial pig farms to our laboratory for enteropathogen detection. Of these samples, 165 (124 from Hubei, 41 from Jiangsu) had been collected in 2014, and 50 (40 from Jiangsu, 6 from Anhui, 4 from Guangxi) had been collected during 2004–2013 and preserved in our laboratory. The 215 samples were simultaneously tested for PEDV and transmissible gastroenteritis virus (TGEV) by using the primers listed in Technical Appendix Table 2. Of the samples tested, 14 (6.51%) were positive for PDCoV, 110 (51.2%) were positive for PEDV, and 5 (2.3%) were positive for TGEV. Of the 14 PDCoV-positive samples, 7 (50%) were also positive for PEDV; 2 of the 215 samples were co-infected with PEDV, TGEV, and PDCoV (Technical Appendix Table 1). Previous studies have shown that prevalence of PDCoV in the midwestern United States in 2014 was high (30%) and that PDCoV co-infections with other pathogens (such as PEDV and rotavirus) are more common (78% of PDCoV infections) (4). At the same time in mainland China, the rate of PDCoV positivity was lower (7.27%), whereas that of PEDV was higher (52.73%), suggesting that PEDV remains the main causative agent of piglet diarrhea diseases in mainland China. Similarly, in South Korea in 2014, only 2 PDCoV-positive samples were detected in 113 samples of diarrhea from pigs (6). 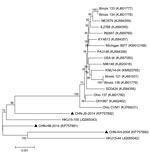 Although all reported PDCoV strains from China shared high similarity with each other, a phylogenetic tree based on all available complete PDCoV genome sequences showed that these PDCoV strains clearly cluster in different clades (Figure). Strain CHN-JS-2014 shares an ancestor with the strains from the United States and South Korea. CHN-AH-2004 and HKU15-44 share a common ancestor, and CHN-HB-2014 shares a common ancestor with CHN-AH-2004 and HKU15-44.

This work was supported by the Key Technology R&D Programme of China (2015BAD12B02), the Natural Science Foundation of Hubei Province (2014CFA009), and the Fundamental Research Funds for the Central Universities (2013PY043).