In March 2014, avian influenza in poultry in Laos was caused by an emergent influenza A(H5N6) virus. Genetic analysis indicated that the virus had originated from reassortment of influenza A(H5N1) clade 2.3.2.1b, variant clade 2.3.4, and influenza A(H6N6) viruses that circulate broadly in duck populations in southern and eastern China. 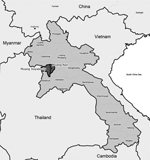 After reports of disease in village poultry in Nan District, Luang Prabang Province, and Xayabouly District, Xayabouly Province (Figure 1), the Lao Provincial Agriculture and Forestry Office visited 2 villages during March 12–14, 2014, and collected samples from dead and sick birds for diagnosis. These birds were positive for avian influenza A virus (H5 subtype) by real-time reverse transcription PCR (RT-PCR) (5). Results were reported to the World Organisation for Animal Health on March 31, 2014 (4).

Infected poultry in both locations were 2 to 3–day-old chicks and ducklings imported from Jinghong in Yunnan Province, China, to a smallholder distributor in Luang Prabang on March 1. Consignments from this batch were delivered to the villages a week later, and birds at both locations showed clinical signs of influenza and died suddenly <24 h after arrival.

Respective pooled organ samples from a chicken and a duck from each village were sent to the Australian Animal Health Laboratory for analysis. These 4 samples were confirmed as positive for avian influenza virus (subtype H5) by RT-PCR but negative for neuraminidase (NA) subtype N1 and were subjected to virus propagation in 9 to 11–day-old specific pathogen–free chicken eggs.

Influenza genome sequencing was performed by using a MiSeq sequencer (Illumina, San Diego, CA, USA) and amplified avian influenza virus DNA libraries from a chicken sample from Luang Prabang and a duck sample from Xayabouly (6). Sequencing showed that an average of 98.6% reads mapped the virus genome with 210–481,069 coverage depth along different segments.

Hemagglutinin (HA) and NA genes were amplified from the 4 virus isolates by using RT-PCR and sequenced by using the Sanger method. Full-length HA and NA sequences from these isolates and 6 internal gene sequences from the 2 representative isolates shared 99%–100% nt identity, which indicated 1 influenza A(H5N6) virus genotype. Twenty consensus virus gene sequences were characterized and deposited in GenBank under accession nos. KM496962–KM496981.

Clinical signs, including facial swelling, hunching, fluffed feathers, depression, and huddling behavior, were observed in birds at 28 hours postinoculation. All birds were euthanized by 44 hours postinoculation for ethical reasons. The short incubation period, rapid progression of fulminant disease, and abundant viral antigen in multiple tissue and cell types were consistent with HPAI.

Analysis of each genome segment indicated that the Laos influenza A(H5N6) virus (LAO/14) is a novel triple reassortant. All genome segments of LAO/14 had highest (99%) GenBank sequence matches with corresponding genes of A/duck/Guangdong/GD01/2014(H5N6) (GD01/14), a virus independently identified in March 2014. We performed maximum-likelihood phylogenetic analysis on the 8 gene segments of LAO/14 by using the MEGA6 program (7) and avian influenza virus (subtypes H5 or N6) sequences from GenBank.

HA gene phylogeny confirmed that LAO/14 and GD01/14 were closely related and belonged to clade 2.3.4.6, which was proposed for H5 subtype HPAI viruses with N1, N2, and N8 subtypes detected in poultry in China since 2010 (8) and in Vietnam in 2014 (Figure 2). The progenitor influenza A(H5N6) virus reassortant might have derived its HA gene from A/wild duck/Shandong/628/2011(H5N1)–like viruses in eastern China (Figure 2). Another virus, A/environment/Zhenjiang/C13/2013(H5N6), which has a similar genotype but independently reassorted gene lineages, had also been identified in Jiangsu Province (Figure 2; Technical Appendix). The same clade 2.3.4 H5 subtype virus donor pool resulted in a reassortant influenza A(H5N8) virus that has caused influenza outbreaks in poultry in South Korea since January 2014 (9).

Mature HA proteins of LAO/14 and GD01/14 have amino acids H103, N182, G221, Q222, and G224 (H5 numbering), which indicates that a preference for avian-like α2,3-sialic acid receptor binding is probably retained (10,11). Influenza A(H5N6) viruses have the HA cleavage sequence PLRERRRKR/GLF that is common in clade 2.3.4 HPAI viruses. Additional HA1 sites that might contribute to receptor binding and antigenic properties of LAO/14 are shown in Table 1.

Hemagglutination by LAO/14 was generally uninhibited by chicken or ferret antisera against reference influenza A(H5N1) virus, including antisera to a clade 2.3.4 virus from Laos (Table 2), by hemagglutination inhibition test. Antigenic divergence of LAO/14 from clade 2.3.4 viruses was supported by accumulation of 31-aa substitutions in their mature HA1 (Table 1). However, chicken antiserum against A/duck/Laos/XBY004/2014(H5N6) showed broader cross-reactivity with some viruses of other influenza A(H5N1) clades, which might indicate some conservation of epitopes.

Influenza A(H5N6) viruses might already be widely distributed; poultry in Vietnam have been affected since April 2014 (4). LAO/14 was antigenically distant to clade 2.3.4 viruses, which raises concerns about effectiveness of current poultry vaccines against this virus, as well as vaccine candidate selection for prepandemic preparedness.

We thank the Ministry of Agriculture and Forestry and the Ministry of Health of the Government of Laos for their collaboration and assistance during this investigation; Jeff Butler, Ivano Broz, Sarah Eastwood, Ry Evans, Kerryn Graham, Gemma Harvey, Dayna Johnson, Tyrone McDonald, and Som Walker for providing technical and analytical assistance; and the World Health Organization Collaborating Center for Influenza at St. Jude Children’s Research Hospital (Memphis, TN, USA) for providing reference ferret serum samples and homologous virus antigens.

This study was partly supported by the US Agency for International Development.