We detected the mcr-1 gene in 21 (14.8%) Salmonella isolates from pigs at slaughter; 19 were serovar Typhimurium sequence type 34. The gene was located on IncHI2-like plasmids that also harbored IncF replicons and lacked a conjugative transfer region. These findings highlight the need to prevent further spread of colistin resistance in animals and humans.

Since our report of emergence of a plasmid-mediated colistin resistance mechanism involving the mcr-1 gene in Escherichia coli (1), mcr-1 has been found in >30 countries in 5 continents in <1 year (2). E. coli is the main host of mcr-1, although several other Enterobacteriaceae, including Salmonella, have also been implicated as carriers of this gene (3,4). We screened pigs at slaughter for Salmonella isolates to elucidate the epidemiology of mcr-1 in this major foodborne pathogen, which a serious public health problem.

During July 2013–May 2014, a total of 1,780 cecum samples were obtained from pigs at 5 slaughter houses in southern and central China. Samples were incubated in buffered peptone water for 20 h and then inoculated into chromogenic medium selective for Salmonella spp. (CHROMagar Microbiology, Paris, France) for 24 h. Suspected Salmonella colonies were selected (1 isolate was selected from each sample) and identified by using PCR for detection of the invA gene.

We obtained 142 Salmonella isolates and screened them for mcr-1 by using PCR and sequencing with primers described (1); 21 (14.8%) were positive for mcr-1. These isolates were serotyped as described (5). We determined the clonal relationship of mcr-1–positive isolates by using pulsed-field gel electrophoresis (PFGE) with XbalI restriction enzyme and identified sequence types (STs) of these isolates by using multilocus sequence typing (http://mlst.warwick.ac.uk/mlst/dbs/Senterica).

Most of the isolates had indistinguishable PFGE patterns and were clonally related to serovar Typhimurium ST34 (n = 19), which was the dominant type (Table). ST34 is common in isolates from humans in China and other countries and has been linked to food-producing animals (6,7).

We determined MICs for 12 antimicrobial drugs for all mcr-1–positive isolates by using agar dilution methods or a broth microdilution method. Colistin showed MICs of 1–2 mg/L for these isolates (Table). More than 80% of the isolates were also resistant to ampicillin, streptomycin, florfenicol, tetracycline, sulfamethoxazole/trimethoprim, and gentamicin; 76.2% showed reduced susceptibility (MIC >0.06 mg/L) to ciprofloxacin.

We identified 2 lipopolysaccharide regulatory genes (pmrA and pmrB) by using and PCR and sequencing (8). Plasmid-mediated resistance genes floR (florfenicol resistance) and oqxAB (olaquindox and ciprofloxacin resistance) were detected by using PCR. None of the 21 isolates had mutations in the pmrA and pmrB genes, which are associated with colistin resistance in Salmonella isolates. A total of 20 and 19 isolates had the floR and oqxAB genes, respectively. Salmonella Typhimurium ST34 has also been associated with the spread of the oqxAB gene in human clinical isolates in China (9), and Salmonella Typhimurium ST34 coproducing oqxAB or floR genes has also been isolated from humans in Europe and Canada (4,10).

To determine the genetic context of mcr-1, we used PCR mapping with primers ISAP-F (5′-CGAAGCACCAAGACATCA-3′) and MCR-R (5′-CCACAAGAACAAA CGGACT-3′). Insertion sequence ISApl1 was found upstream of mcr-1 for all isolates.

We determined transferability and location of mcr-1 by using conjugation, transformation, and hybridization (with S1-PFGE nuclease). These procedures showed that mcr-1 genes were located on an ≈180-kb plasmid, except for those in strains SH33 (≈110-kb plasmid) and SH239 (≈180-kb plasmid and ≈138-kb plasmid) (Table). However, the mcr-1 gene could not be transferred to E. coli C600 by conjugation.

We then randomly selected 6 mcr-1–positive Salmonella isolates (SH138, SH149, SH175, SH36, SH39, and Z4P319S) for chemical transformation, which was successful for SH175, SH36, and Z4P319S. S1-PFGE confirmed that transformants harbored single plasmids and had 8–16-fold higher MICs for colistin than the recipient E. coli DH5α. The floR and oqxAB genes were also transferred with the mcr-1 gene.

We used Hiseq Technology (Illumina, San Diego, CA, USA) to sequence plasmid DNA purified from transformants of Salmonella Heidelberg SH36 and Salmonella London Z4P319S and genomic DNA extracted from the original isolate (Salmonella Typhimurium SH138, which was selected as a representative ST34 strain). We assembled sequence reads were assembled into contigs by using SOAPdenovo version 2.04 (http://soap.genomics.org.cn/soapdenovo.html) and the separated plasmid contigs of the 3 mcr-1–carrying plasmids from chromosomal contigs and compared them with pHNSHP45–2 by using blastn (http://blast.ncbi.nlm.nih.gov/Blast.cgi) and BRIG (11). We then analyzed replicon sequence types of these plasmids by using the Plasmid MLST Database (http://pubmlst.org/plasmid/) and performed analysis and annotation of the partial sequence of mcr-1–carrying plasmids by using the RAST Server (12), ISfinder (https://www-is.biotoul.fr), BLAST (http://blast.ncbi.nlm.nih.gov/Blast.cgi), and Gene Construction Kit 4.0 (Textco BioSoftware, Inc., West Lebanon, NH, USA). 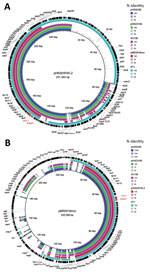 Compared with pHNSHP45–2 (in E. coli isolated from a pig in China [14]), the 3 plasmids all had a typical IncHI2-type backbone coding replication, transfer, maintenance, and stability functions, and a multiresistance region. However, we did not identify conjugative transfer region 1 of IncHI2 plasmids, including traJGIH and trhRYXFHG, in the 3 plasmids (Figure 1, panel A), which might be the reason why these plasmids were not transferred by conjugation.

The multiresistance region contained numerous resistance genes, such as oqxAB, floR, sul1, cmlA, aadA2, and complete or truncated insertion sequences and transposons (IS26, ΔTn2, Tn21, IS1006, and ISCR2), which was similar to that of pHNSHP45-2, except that pHNSH36, pHNZ319S, and pHNSH138 were missing fosA3 and blaCTX-M-14 (Figure 1, panel A). The 2,635-bp module (mcr-1-ΔISApl1) was similar to that of pHNSHP45-2, but different in some aspects, such as insertion sites and orientation, which were identical to those of the novel IncHI2-IncF plasmid pMR0516mcr (GenBank accession no. KX276657) found in a clinical E. coli isolate from the United States (15), and human E. coli strain TN1 from Vietnam (GenBank accession no. LSBW01000090.1) (Figure 2).

Similar to pMR0516mcr (IncHI2-F18:A-:B1) (Figure 1, panel B), the 3 plasmids also contained an IncF-type backbone, including regions coding replication and partial regions coding transfer, maintenance, and stability functions. Similar to pHNSHP45-2, the plasmid carrying mcr-1 in strain NT1 belonged to the ST3-IncHI2 plasmid group. However, pMR0516mcr and the 3 plasmids described in this study were not typeable because there were no smr0199 loci in the IncHI2 plasmid (Figure 1, panel B). These data suggest that the mcr-1-ISApl1 module might have first been inserted into IncHI2 plasmids and that recombination between IncF- and IncHI2-type plasmids might have occurred subsequently, resulting in acquisition of the IncF-backbone fragment and deletion of the IncHI2 transfer region 1 or combination with the replication region in some instances.

We found that spread of mcr-1 in pigs at slaughter in China was associated with clonal dissemination of Salmonella Typhimurium ST34. This organism has also been detected in Portugal and England (3,4). The presence of indistinguishable IncHI2-F4:A-:B5 plasmids in different Salmonella serovars indicates that horizontal transfer of mcr-1–harboring plasmids might have also contributed to spread of mcr-1 in Salmonella spp.

Other drug-resistance genes, such as floR and oqxAB, were always transferred with mcr-1 by IncHI2-F4:A-:B5 plasmids, which led to successful flow of mcr-1–harboring Salmonella isolates under various selective pressures because florfenicol and olaquindox are widely used in farm animals in China. In addition, spread of similar IncHI2-like plasmids and Salmonella Typhimurium ST34 clones carrying mcr-1 in different countries highlights the need for internationally coordinated intervention strategies to limit its further dissemination.

Y.D. has served on advisory boards for Shionogi, Meiji Seika Pharma, Tetraphase Pharmaceuticals, and Merck, and has received research funding from Merck and The Medicines Company for studies not related to this study.

Ms. Yi is a researcher at the College of Veterinary Medicine, South China Agricultural University, Guangdong, China. Her primary research interest is microbiology, including antimicrobial resistance genes and their means of dissemination.