Bordetella pertussis, a highly communicable, gram-negative coccobacillus, is the etiologic agent of pertussis (whooping cough), an acute respiratory infection that leads to severe illness in children. Vaccination is the most effective method for preventing and controlling pertussis. In Japan, acellular pertussis vaccines (ACVs) were introduced in 1981. Pertussis toxin and filamentous hemagglutinin derived from B. pertussis are the major antigens in ACVs in Japan, and certain ACVs also contain pertactin and fimbriae (1). Pertactin is believed to play a role in adherence to human epithelial cells (2); however, B. pertussis isolates that lack pertactin production have been identified in several countries where ACVs have been introduced (3–7). In Japan, pertactin-deficient isolates have increased significantly since the early 2000s, resulting in a high prevalence of these isolates (5,8). Recent studies have demonstrated that pertactin-deficient strains could colonize the respiratory tract more effectively than pertactin-producing strains in ACV-vaccinated mice (9,10). Supporting these results, an epidemiologic study suggested that ACV-vaccinated persons are more susceptible to pertactin-deficient strains than to pertactin-producing strains (11). These reports imply that pertactin-deficient strains have increased fitness in humans who have been vaccinated with ACVs and that their expansion may reduce the effectiveness of ACVs. We assessed trends in the frequency of pertactin-deficient isolates in Japan and further investigated their genotypes using multilocus variable-number tandem-repeat analysis (MLVA). 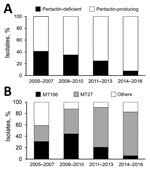 Figure. Temporal trends in the frequency of pertactin-deficient isolates and changes in multi-locus variable-number tandem repeat analysis types (MTs) in the Bordetella pertussis population in Japan. Pertactin production (A) and MTs (B)...

We demonstrated that genotypic replacement from MT186 to MT27 has taken place among recent B. pertussis isolates in Japan: MT27 is a triple-locus variant of MT186. MT186 strains carry the pertussis-toxin promoter allele ptxP1, whereas MT27 strains carry the allele ptxP3 (8). B. pertussis strains carrying ptxP3 (i.e., MT27) produce more of several virulence factors than do ptxP1 (i.e., MT186) strains (12,13). The population of MT27 strains carrying ptxP3 has increased worldwide (14,15), although a low frequency of ptxP1 isolates was observed in Japan (8), suggesting that MT27 strains are associated with the recent pertussis resurgence. It is possible, therefore, that the genotypic replacement in the B. pertussis population may have resulted from the expansion of the more virulent ptxP3 (i.e., MT27) strains. In addition, given that pertactin-deficient MT27 isolates are rare, this genotypic replacement may have contributed to the recent decrease in pertactin-deficient isolates in Japan.

Dr. Hiramatsu is a research scientist at the National Institute of Infectious Diseases in Tokyo, Japan. His research interests focus on the epidemiology, pathogenesis, and development of pertussis vaccines.