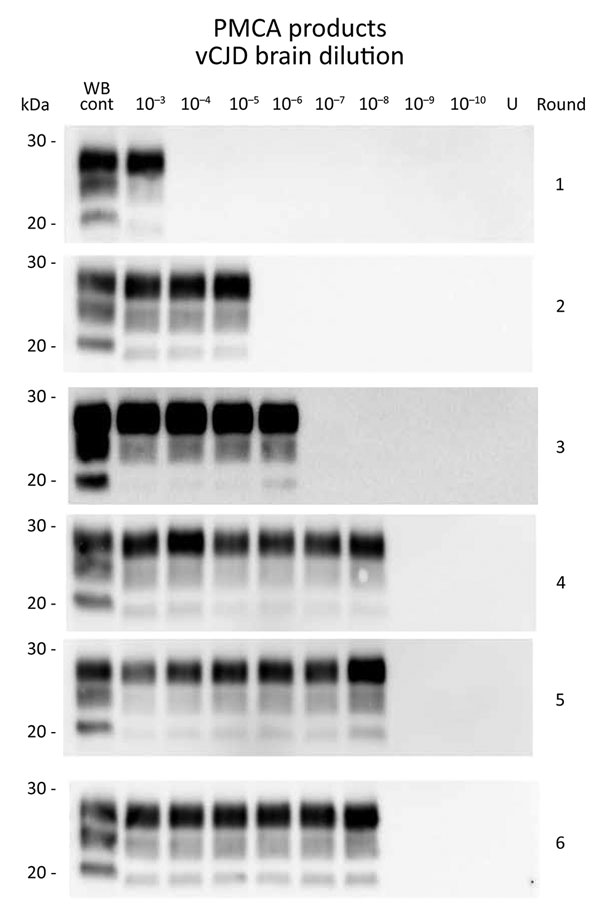 Figure 1. Western blots of variant Creutzfeldt-Jakob disease (vJCD) proteinase K–resistant prions (PrPres) analyzed by protein misfolding cyclic amplification (PMCA) in tissues of clinical and asymptomatic patients. PMCAs were seeded with a 10-fold serial dilutions of a reference vCJD brain homogenate (10% wt/vol, 10−2–10−10 dilutions). This homogenate had been endpoint titrated by bioassay in bovine prion (PrP)–expressing mice (tgBov, intracerebral route, 107.7 50% lethal dose/g). PMCA substrate was prepared by using brains from transgenic mice overexpressing the ARQ variant of sheep prion protein. An unseeded (lane U) reaction was included as a specificity control. PMCAs were subjected to 6 rounds of amplification, each composed of 96 cycles (sonication for 10 s and incubation for 14.5 min at 39.5°C) in a Qsonica700 Sonicator (Qsonica LLC, Newtown, CT, USA). After each round, reaction products (1 volume) were mixed with fresh substrate (9 volumes) to seed the following round. Part of the same product was analyzed by Western blotting for abnormal PrPres (Sha31 antibody epitope YEDRYYRE). A sheep scrapie sample (WB cont) was included as a control on each gel. WB, Western blot.