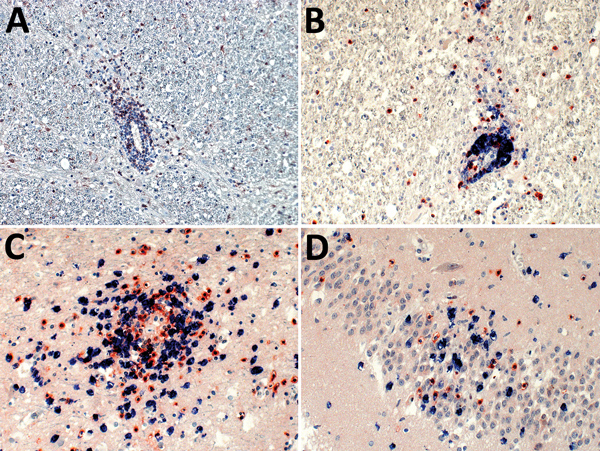 Figure 2. Demonstration of neutrophils, B cells, and CD4+ and CD8+ T-lymphocyte infiltration of the brain parenchyma during variegated squirrel bornavirus 1 infection. A) Demonstration of CD177+ neutrophils infiltrating the brain parenchyma from a blood vessel. Neutrophils are also seen scattered throughout the tissue during the infection. Immunoperoxidase stain with hematoxylin counterstain; original magnification ×200. B) Depiction of B cells (CD20, blue) and T cells (CD3, red) around a blood vessel. B cells showed mainly perivascular cuffing, and only a few were found in the brain parenchyma, whereas T cells were also seen in high numbers infiltrating the brain parenchyma. Immunoperoxidase and immunophosphatase stains; original magnification ×200. C, D) Mixed CD4+ (red) and CD8+ (blue) T-cell infiltrates around a blood vessel and invading adjacent tissue (C), and the hippocampus (D). Immunoperoxidase and immunophosphatase stains; original magnification ×400.