Carbapenem-resistant Klebsiella pneumoniae has emerged as one of the major multidrug-resistant bacterial pathogens worldwide. The international spread of this pathogen has been linked to a few high-risk clone group (CG) strains, including CG258, CG14/15, CG17/20, CG43, CG147, and CG307 (1), of which CG258 is the most widely spread. Within CG258, sequence type (ST) 258 predominates in North America and Europe, but ST11 is the primary carbapenem-resistant K. pneumoniae clone in eastern Asia, especially in China (2–4).

Susceptibility testing showed that the initial Kp2588 blood isolate was resistant to most cephalosporins and aztreonam but susceptible to cefepime, carbapenems, amoxicillin/clavulanic acid, piperacillin/tazobactam, amikacin, and tigecycline (Table). In contrast, the urinary isolates Ec2551 and Kp2573 were resistant to all β-lactams and β-lactam/β-lactamase inhibitors, including the 4 carbapenems tested in this study (Table). 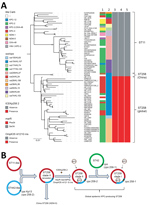 We conducted next-generation sequencing (NGS; Illumina Hiseq, https://www.illumina.com) for all 3 isolates and deposited data in the National Center for Biotechnology (NCBI) Bioproject PRJNA354234 (https://www.ncbi.nlm.nih.gov/bioproject) GenBank database (accession nos. RXHE00000000, RXHG00000000 and RXHF00000000, respectively). Analysis of resistance genes and plasmid sequences showed that the 2 ST258 K. pneumoniae isolates carried similar resistance and plasmid replicon genes, except that Kp2573 harbored blaNDM-5 and an IncX3 plasmid replicon (Figure 1). E. coli strain Ec2551 had the same blaNDM-5 and IncX3 replicon genes as Kp2573, but also had a diverse array of other resistance and plasmid replicon genes in comparison with the 2 K. pneumoniae isolates (Figure 2).

We then transferred blaNDM-5–harboring plasmids from Ec2551 and Kp2573 to recipient strain E. coli J53AZR by conjugation, followed by plasmid NGS as described. Plasmids sequence analysis showed that Ec2551 and Kp2573 carry an identical blaNDM-5–harboring IncX3 plasmid. The plasmid is 46,161 bp and is identical to several blaNDM-5–harboring plasmids identified in China and other countries (e.g., GenBank accession nos. CP032424, MF679143, MG591703, CP028705, and CP024820). Core single-nucleotide polymorphism (SNP) analysis showed that Kp2588 differed from Kp2573 by 1 SNP. These results strongly suggest that carbapenem-resistant Kp2573 might have evolved from the carbapenem-susceptible blood isolate Kp2588 by acquisition of a blaNDM-5–harboring IncX3 plasmid from the same patient.

These observations have also updated our previous hypothesis regarding the molecular evolution of ST258 (Figure 2, panel B) (9). Our initial study suggested that the prototypical ST258 strain arose as a consequence of recombination of large segments of the ST11 and ST442 genomes, such that it has the same wzi154/KL107 (previously named cps-2/clade II) capsular type as the parental ST442 strain (9). Additional genotypic changes, including acquisition of ICEKp258.2, the MarR Ser34Phe substitution, and the ompK35 nt121G insertion, as well as the acquisition of KPC plasmids in ST258 clade II strains, define the global KPC-producing carbapenem-resistant K. pneumoniae ST258 clone.

A second molecular event, generated by replacement of the ST258 clade II cps region with the corresponding region from ST42, subsequently created the equally prevalent ST258 clade I clone (9). Both clades I and II ST258 strains have shown the ability to host diverse KPC plasmids, which might in part contribute to the spread of global ST258 strains. In contrast, the China ST258 strains appear to have evolved separately, recently acquiring the blaNDM5–harboring plasmid (Figure 2, panel B), highlighting the continuing evolution of K. pneumoniae ST258 strains.

We report the genotype of an NDM-5–producing K. pneumoniae ST258 strain isolated in southwest China. The blaNDM-5 gene was likely acquired by a carbapenem-susceptible ST258 strain from an NDM-5–producing E. coli strain in vivo in the same patient as a result of horizontal transfer of a blaNDM-5–harboring IncX3 plasmid. Genomic comparison of the ST258 strain from China with other carbapenem-resistant Klebsiella pneumoniae ST258 strains indicated that they both evolved from a common ancestral strain but with distinct genetic characteristics suggestive of separate evolutionary histories. Further genomic comparisons between ST258 strains from China and their global ST258 counterparts will help elucidate the molecular mechanisms underscoring the spread of this high-risk clone.

Dr. Xin Zhang is a clinical microbiologist at the Sichuan Academy of Medical Science, Sichuan, China. Her research interests include the clinical epidemiology of antimicrobial drug resistance and infectious disease.