Vaccines against viral infections have been proposed to reduce prescribing of antibiotics and thereby help control resistant bacterial infections. However, by combining published data sources, we predict that pediatric live attenuated influenza vaccination in England and Wales will not substantially reduce antibiotic consumption or adverse health outcomes associated with antibiotic resistance.

Antibiotic use drives the spread of antibiotic resistance. A considerable proportion of antibiotic prescriptions are prescribed unnecessarily for conditions that are either self-limiting or nonbacterial in etiology (1). Because influenza is often treated inappropriately with antibiotics, expanding access to influenza vaccines has been proposed as a means of reducing unnecessary prescribing and preventing resistant infections (2).

In 2013, England and Wales began rolling out the live attenuated influenza vaccine (LAIV) for 2–16-year-old children (3). Here, we estimate the potential effect on antibiotic prescribing and antibiotic resistance.

We estimated that 726 antibiotic prescriptions are written for every 1,000 influenza-attributable GP consultations (5). For our uncertainty analysis, we used a lower estimate of 313 per 1,000, derived from electronic health records of prescriptions within 30 days of a consultation for influenza-like illness (ILI) or acute cough in England during 2013–2015 (7).

We assumed that LAIV prevents 49% of symptomatic influenza cases on average, using a previously published mathematical model of pediatric LAIV in England and Wales, which assumes 50% uptake and either 70% (matched-year) or 42% (unmatched-year) efficacy among 2–16-year-olds (3). This reduction is consistent with a pilot study comparing consultation rates in treatment with control areas before and after LAIV rollout (8). For our uncertainty analysis, we used lower and higher estimates of 32% and 63% fewer influenza cases from the same model, assuming an uptake of 30% and 70%, respectively.

To predict the healthcare benefits of reducing unnecessary prescribing, we used linear regression with a country’s rate of primary-care antibiotic use as the predictor variable and previously published 2015 estimates of adverse health outcomes associated with 16 resistant bacterial strains across European countries (9) as the response variables. We adopted a published cost estimate of $1,415 per resistant infection (2016 USD) (10), adjusted for inflation and healthcare purchasing power parity to £520 (2015 GBP).

We used Monte Carlo sampling to explore uncertainty across estimates for consultation rate, prescribing rate, and LAIV effectiveness, weighting age groups by using 2015 demographic data for England and Wales. (Analysis code and data at http://github.com/nicholasdavies/laiv_amr_ew; additional details in the Appendix.)

We found that pediatric LAIV has the potential to reduce antibiotic consumption by 5.3 (95% highest density interval [HDI] 3.7–7.0) prescriptions per 1,000 person-years (Table 1) across the population of England and Wales, or 0.8% of the antibiotic dispensation rate for primary care in England and Wales in 2015. For comparison with secular trends, this rate has fallen by 2.5% each year during 2012–2018 in England (Appendix Figure). Focusing on vaccine recipients only, we estimated that the direct effectiveness of LAIV on antibiotic consumption is 5.8 (95% HDI 4.1–7.5) fewer prescriptions per 1,000 person-years in unmatched years and 9.9 (95% HDI 7.0–13) in matched years. 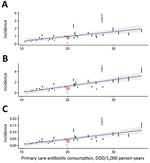 Figure 1. Estimated incidence of adverse health outcomes resulting from antibiotic-resistant infections, plotted against the overall antibiotic consumption in primary care settings in 30 countries in Europe, 2015. A) Antibiotic-resistant cases/1,000 person-years; B)... 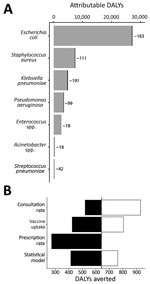 Although 0.8% is a small decrease in antibiotic use, it might appreciably improve the cost-effectiveness of pediatric LAIV if the healthcare costs of resistance are substantial enough (Figure 1). We estimated that LAIV has the potential to reduce resistance-attributable disability-adjusted life years (DALYs) by 642, cases by 432, and deaths by 22 per year in England and Wales (Table 2); averted DALYs were spread relatively evenly across the 7 causative pathogens analyzed (Figure 2, panel A). We estimated a yearly cost saving of £224,000 for averted resistant infections. Compared with the projected incremental cost (program cost minus healthcare saving) of pediatric LAIV at £63.6 million, and its projected effect of saving 27,475 quality-adjusted life years and averting 799 deaths yearly (3), accounting for resistance will not substantially increase the cost-effectiveness of pediatric LAIV in this setting. Our uncertainty analysis (Figure 2, panel B) identified the consultation rate as having the greatest influence over the effect of LAIV on resistance-associated adverse health outcomes.

Our estimates for the foreseeable reduction in antibiotic prescribing from the LAIV program in England and Wales might seem surprisingly low, given that sore throat, cough, and sinusitis together account for 53% of all inappropriate prescribing, which in turn accounts for at least 9%–23% of all prescribing in England (1). However, many viral and bacterial pathogens cause these symptoms. By one estimate, influenza causes only 11% of GP consultations for acute respiratory illness in England (4), so it might be optimistic to expect influenza vaccination to substantially reduce antibiotic use in this setting.

Our base-case estimate of 726 antibiotic prescriptions per 1,000 influenza-attributable consultations is more than double what electronic health records suggest (7). One explanation is that our estimate, derived from statistical attribution of antibiotic prescriptions to influenza circulation during 1995–2009 (5), feasibly includes prescribing for secondary infections such as otitis media, sinusitis, and pneumonia. Moreover, electronic health records might not reliably reflect antibiotic prescribing rates for influenza: in 1 study, only 8% of consultations for ILI resulted in influenza or ILI being medically recorded (6). Conversely, antibiotic use in England has declined since 1995 (by 22% during 1998–2016) (11). Accordingly, our base-case results should be interpreted as the maximum potential reduction by LAIV of antibiotic use.

In randomized trials, the direct effect of influenza vaccines on vaccinated children has ranged from a 44% reduction (Italy) to a 6% increase (United States) in antibiotic prescriptions over the 4-month period following vaccination, whereas estimates of the effect over entire populations (all ages, vaccinated and unvaccinated) range from 11.3 fewer prescriptions per 1,000 person-years in Ontario, Canada, to 3.9 fewer in South Africa and Senegal (Appendix). This variability might arise from differences in vaccine efficacy and coverage, population risk factors, influenza circulation, or existing patterns of antibiotic use, which make generalizing estimates across settings challenging.

Our framework estimates the effect of influenza vaccination on antibiotic resistance by using the relationship between influenza circulation and antibiotic use in England and Wales, and can be adapted to other settings for which this relationship can be quantified. An alternative approach would be to correlate LAIV uptake, rather than influenza circulation, directly with antibiotic use. Challenges with that approach include appropriately controlling for confounding factors in the relationship between vaccine uptake and antibiotic use and quantifying herd immunity. However, consistent with our approach, UK-specific empirical estimates have suggested little or no effect of LAIV uptake on prescribing: a self-controlled case-series study found that 2–4-year-old LAIV recipients took 13.5% fewer amoxicillin courses in the 6 months after vaccination (13), whereas an LAIV pilot study detected no difference in prescribing rates for respiratory tract infections between treatment groups (14). No single vaccine is likely to substantially reduce inappropriate antibiotic use in the United Kingdom.

We thank Edwin van Leeuwen for providing results from the mathematical model of influenza transmission and vaccination, Diamantis Plachouras for correspondence, and David R.M. Smith, Edwin van Leeuwen, and Marc Baguelin for discussion.

N.G.D., M.J., and K.E.A. were funded by the National Institute for Health Research Health Protection Research Unit in Immunisation at the London School of Hygiene and Tropical Medicine, in partnership with Public Health England. The views expressed are those of the authors and not necessarily those of the NHS, National Institute for Health Research, Department of Health, or Public Health England.