We showed that severe acute respiratory syndrome coronavirus 2 is probably a novel recombinant virus. Its genome is closest to that of severe acute respiratory syndrome–related coronaviruses from horseshoe bats, and its receptor-binding domain is closest to that of pangolin viruses. Its origin and direct ancestral viruses have not been identified.

Seventeen years after the severe acute respiratory syndrome (SARS) epidemic, an outbreak of pneumonia, now called coronavirus disease (COVID-19), was reported in Wuhan, China. Some of the early case-patients had a history of visiting the Huanan Seafood Wholesale Market, where wildlife mammals are sold, suggesting a zoonotic origin. The causative agent was rapidly isolated from patients and identified to be a coronavirus, now designated as severe acute respiratory syndrome coronavirus 2 (SARS-CoV-2) by the International Committee on Taxonomy of Viruses (1). SARS-CoV-2 has spread rapidly to other places; 113,702 cases and 4,012 deaths had been reported in 110 countries/areas as of March 10, 2020 (2). In Hong Kong, 130 cases and 3 deaths had been reported.

SARS-CoV-2 is a member of subgenus Sarbecovirus (previously lineage b) in the family Coronaviridae, genus Betacoronavirus, and is closely related to SARS-CoV, which caused the SARS epidemic during 2003, and to SARS-related-CoVs (SARSr-CoVs) in horseshoe bats discovered in Hong Kong and mainland China (3–5). Whereas SARS-CoV and Middle East respiratory syndrome coronavirus were rapidly traced to their immediate animal sources (civet and dromedaries, respectively), the origin of SARS-CoV remains obscure.

SARS-CoV-2 showed high genome sequence identities (87.6%–87.8%) to SARSr-Rp-BatCoV-ZXC21/ZC45, detected in Rhinolophus pusillus bats from Zhoushan, China, during 2015 (6). A closer-related strain, SARSr-Ra-BatCoV-RaTG13 (96.1% genome identity with SARS-CoV-2), was recently reported in Rhinolophus affinis bats captured in Pu’er, China, during 2013 (7). Subsequently, Pangolin-SARSr-CoV/P4L/Guangxi/2017 (85.3% genome identities to SARS-CoV-2) and related viruses were also detected in smuggled pangolins captured in Nanning, China, during 2017 (8) and Guangzhou, China, during 2019 (9). To elucidate the evolutionary origin and pathway of SARS-CoV-2, we performed an in-depth genomic, phylogenetic, and recombination analysis in relation to SARSr-CoVs from humans, civets, bats, and pangolins (10).

We downloaded 4 SARS-CoV-2, 16 human/civet-SARSr-CoV, 63 bat-SARSr-CoV and 2 pangolin-SARSr-CoV genomes from GenBank and GISAID (https://www.gisaid.org). We also sequenced the complete genome of SARS-CoV-2 strain HK20 (GenBank accession no. MT186683) from a patient with COVID-19 in Hong Kong. We performed genome, phylogenetic, and recombination analysis as described (11).

Most predicted proteins of SARS-CoV-2 showed high amino acid sequence identities with that of SARSr-Ra-BatCoV RaTG13, except the receptor-binding domain (RBD) region. SARS-CoV-2 possessed an intact open reading frame 8 without the 29-nt deletion found in most human SARS-CoVs. The concatenated conserved replicase domains for coronavirus species demarcation by the International Committee on Taxonomy of Viruses showed >92.9% aa identities (threshold >90% for same species) between SARS-CoV-2 and other SARSr-CoVs, supporting their classification under the same coronavirus species (Table 2) (1).

Unlike other members of the subgenus Sarbecovirus, SARS-CoV-2 has a spike protein that contains a unique insertion that results in a potential cleavage site at the S1/S2 junction, which might enable proteolytic processing that enhances cell–cell fusion. SARS-CoV-2 was demonstrated to use the same receptor, human angiotensin-converting enzyme 2 (hACE2), as does SARS-CoV (7). The predicted RBD region of SARS-CoV-2 spike protein, corresponding to aa residues 318–513 of SARS-CoV (12), showed the highest (97% aa) identities with pangolin-SARSr-CoV/MP789/Guangdong and 74.1%–77.7% identities with human/civet/bat-SARSr-CoVs known to use hACE2 (Table 1). Moreover, similar to the human/civet/bat-SARSr-CoV hACE2-using viruses, the 2 deletions (5 aa and 12 aa) found in all other SARSr-BatCoVs (10) were absent in SARS-CoV-2 RBD (Appendix Figure 1). Of the 5 critical residues needed for RBD-hACE2 interaction in SARSr-CoVs (13), 3 (F472, N487, and Y491) were present in SARS-CoV-2 RBD and pangolin SARSr-CoV/MP789/2019-RBD.

Phylogenetic analysis showed that the RNA-dependent RNA polymerase gene of SARS-CoV-2 is most closely related to that of SARSr-Ra-BatCoV RaTG13, whereas its predicted RBD is closest to that of pangolin-SARSr-CoVs (Figure 1). This finding suggests a distinct evolutionary origin for SARS-CoV-2 RBD, possibly as a result of recombination. Moreover, the SARS-CoV-2 RBD was also closely related to SARSr-Ra-BatCoV RaTG13 and the hACE2-using cluster containing human/civet-SARSr-CoVs and Yunnan SARSr-BatCoVs previously successfully cultured in VeroE6 cells (4,5). 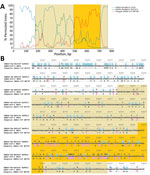 Despite the close relatedness of SARS-CoV-2 to bat and pangolin viruses, none of the existing SARSr-CoVs represents its immediate ancestor. Most of the genome region of SARS-CoV-2 is closest to SARSr-Ra-BatCoV-RaTG13 from an intermediate horseshoe bat in Yunnan, whereas its RBD is closest to that of pangolin-SARSr-CoV/MP789/Guangdong/2019 from smuggled pangolins in Guangzhou. Potential recombination sites were identified around the RBD region, suggesting that SARS-CoV-2 might be a recombinant virus, with its genome backbone evolved from Yunnan bat virus–like SARSr-CoVs and its RBD region acquired from pangolin virus–like SARSr-CoVs.

The ability of SARS-CoV-2 to emerge and infect humans is likely explained by its hACE2-using RBD region, which is genetically similar to that of culturable Yunnan SARSr-BatCoVs and human/civet-SARSr-CoVs. Most SARSr-BatCoVs have not been successfully cultured in vitro, except for some Yunnan strains that had human/civet SARS-like RBDs and were shown to use hACE2 (4,5). For example, SARSr-Rp-BatCoV ZC45, which has an RBD that is more divergent from that of human/civet-SARSr-CoVs, did not propagate in VeroE6 cells (6). Factors that determine hACE2 use among SARSr-CoVs remain to be elucidated.

Although the Wuhan market was initially suspected to be the epicenter of the epidemic, the immediate source remains elusive. The close relatedness among SARS-CoV-2 strains suggested that the Wuhan outbreak probably originated from a point source with subsequent human-to-human transmission, in contrast to the polyphyletic origin of Middle East respiratory syndrome coronavirus (14). If the Wuhan market was the source, a possibility is that bats carrying the parental SARSr-BatCoVs were mixed in the market, enabling virus recombination. However, no animal samples from the market were reported to be positive. Moreover, the first identified case-patient and other early case-patients had not visited the market (15), suggesting the possibility of an alternative source.

Because the RBD is considered a hot spot for construction of recombinant CoVs for receptor and viral replication studies, the evolutionarily distinct SARS-CoV-2 RBD and the unique insertion of S1/S2 cleavage site among Sarbecovirus species have raised the suspicion of an artificial recombinant virus. However, there is currently no evidence showing that SARS-CoV-2 is an artificial recombinant, which theoretically might not carry signature sequences. Further surveillance studies in bats are needed to identify the possible source and evolutionary path of SARS-CoV-2.

Dr. Lau is a professor and head of the Department of Microbiology at The University of Hong Kong, Hong Kong, China. Her primary research interest is using microbial genomics for studying emerging infectious diseases, including coronaviruses.

Page created: April 21, 2020
Page updated: June 18, 2020
Page reviewed: June 18, 2020
The conclusions, findings, and opinions expressed by authors contributing to this journal do not necessarily reflect the official position of the U.S. Department of Health and Human Services, the Public Health Service, the Centers for Disease Control and Prevention, or the authors' affiliated institutions. Use of trade names is for identification only and does not imply endorsement by any of the groups named above.