Antimicrobial-resistant Mycoplasma genitalium is becoming increasingly common and creating major treatment challenges. We present early data on combination therapy with doxycycline and sitafloxacin to treat highly resistant M. genitalium. We found the regimen was well tolerated and cured 11/12 infections that had failed prior regimens with moxifloxacin and pristinamycin.

Mycoplasma genitalium is a sexually transmitted bacterium with marked capacity for developing antimicrobial resistance (1). Macrolides and 4th-generation fluroquinolones, such as moxifloxacin, have been the main agents displaying efficacy against M. genitalium. However, macrolide resistance has increased to >50% in many nations, and quinolone resistance is increasing (2–6). In Australia, 16% of M. genitalium strains are reported to have dual-class resistance (5), and Japan reports dual-class resistance of up to 25% (2), resulting in infections that often cannot be cured with current recommended therapies.

Sequential monotherapy with doxycycline followed by moxifloxacin (7–9) is currently first-line therapy for macrolide-resistant M. genitalium in guidelines in Australia and the United Kingdom and achieves cure in 92% of cases (95% CI 88.1%–94.6%) at our service (7). When the doxycycline/moxifloxacin sequential regimen fails, we use a pristinamycin-based regimen, which achieves 75% cure (95% CI 66%–82%) (10). Since August 2017, for patients in whom both regimens failed, we administered a combination of 100 mg doxycycline and 100 mg sitafloxacin 2 times/day for 7 days.

Access to sitafloxacin is limited in many countries, but it is available in the Asia-Pacific region. Most publications on sitafloxacin are from Japan, where its use as a monotherapy is reported to cure ≈90% of M. genitalium infections (11). However, combination therapies can optimize cure and prevent further resistance in bacteria prone to developing resistance, such as M. genitalium. In vitro, a combination of doxycycline and sitafloxacin (doxycycline+sitafloxacin) shows synergy for quinolone-susceptible M. genitalium strains but has not been evaluated for highly resistant strains (J.S. Jensen, unpub. data). We provide early data on the efficacy and tolerability of a 7-day doxycycline+sitafloxacin combination therapy for treatment-resistant M. genitalium. The ethics committee of Alfred Hospital (Melbourne) approved this study (approval no. 232/16). 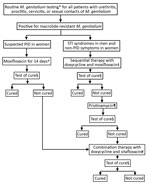 The study included 12 cases of macrolide-resistant M. genitalium detected among all patients assessed with the clinical protocol at Melbourne Sexual Health Centre (MSHC), Carlton, Victoria, Australia, for routine M. genitalium testing (7,9) during August 2017–April 2019 (Figure). During the study period, 96 (8%) of M. genitalium cases failed to respond to doxycycline/moxifloxacin; we subsequently treated 56 with pristinamycin, which failed in 15 (27%) patients. All 15 opted for combination therapy; 11 provided a test of cure, and the other 4 did not complete follow up. One additional patient also received combination therapy because her pelvic inflammatory disease (PID) did not respond to moxifloxacin. Our final analysis included 12 patients.

Among study participants, 9 sought treatment for urogenital symptoms and 1 for PID; 2 were asymptomatic contacts of persons with M. genitalium. Median age was 29 years (interquartile range [IQR] 27–32 years). All men (10/12) had urethral infections; the 2 women had cervicovaginal infections.

At MSHC, we often give doxycycline before the main regimen to reduce M. genitalium load and optimize cure (12). We term moxifloxacin-containing regimens as first-line, pristinamycin-containing regimens as second-line, and combination therapy as third-line (Table 1). All 12 patients received a moxifloxacin-based regimen; 9 had sequential doxycycline/moxifloxacin in keeping with clinical guidelines (9). The other 3 had moxifloxacin alone, 1 for PID, and 2 received treatments prior to coming to MSHC (1 was treated for 10 days and the other for 30 days, but we do not know the physician’s rationale for treatment duration). Moxifloxacin-based regimens failed in all patients; 11 were then treated with pristinamycin, which also failed. We administered combination therapy without preceding pristinamycin to 1 patient because of concerns regarding her PID.

Among 10 patients for whom adherence and adverse effects are available, 9 (90.0%; 95% CI 60.0%–99.5%) reported taking all doses of both drugs, including the patient whose treatment failed; 1 reported missing 1 tablet of sitafloxacin. Six (60.0%; 95% CI 31.3%–83.2%) patients reported no adverse effects. Among the other 4, adverse effects were mild and resolved spontaneously (1 each of diarrhea, arthralgia, tendon pain, and possible blurred vision).

Combination therapy with doxycycline+sitafloxacin was well tolerated and effective against treatment-resistant M. genitalium. The regimen was acceptable to clinicians and is now used as our third-line regimen.

Of note, sitafloxacin alone might have cured some or all infections. Further studies comparing sequential and combination therapy with doxycyline+sitafloxacin in highly resistant M. genitalium are needed. However, treatment failures, particularly in cases with concurrent parC and gyrA mutations, would be expected. Moreover, the variable duration of preceding doxycycline may have improved cure.

In conclusion, our results provide important early data on the efficacy and tolerability of doxycycline+sitafloxacin combination therapy to cure highly resistant M. genitalium infections. This approach could become part of a broader stewardship strategy to evaluate combination therapy, which might be needed to further prevent development of antimicrobial-resistant M. genitalium.

We thank the staff at Melbourne Sexual Health Centre for collecting the clinical data for this study, Afrizal Afrizal and Jun Kit Sze for their help with maintaining our electronic patient database, and the laboratory staff at the Royal Women’s Hospital for handling the specimens.

This work was supported by Monash University Central Clinical School departmental scholarship to D.D. and the National Health and Medical Research Council Early Career Fellowship to E.P.F.C. (no. 1091226).

Page created: June 08, 2020
Page updated: July 18, 2020
Page reviewed: July 18, 2020
The conclusions, findings, and opinions expressed by authors contributing to this journal do not necessarily reflect the official position of the U.S. Department of Health and Human Services, the Public Health Service, the Centers for Disease Control and Prevention, or the authors' affiliated institutions. Use of trade names is for identification only and does not imply endorsement by any of the groups named above.