Genomic and Pathologic Findings for Prototheca cutis Infection in Cat

Prototheca spp. (phylum Chlorophyta, order Chlorellales, family Chlorellaceae) are ubiquitous algal organisms that represent emerging infectious agents of humans and animals (1). Protothecosis has been increasingly reported for immunocompromised human and animal patients (1,2). At least 14 species of Prototheca have been recognized; 1 case of P. cutis–associated dermatitis in an immunocompromised man has been reported (3,4). We describe a case of P. cutis in a domestic cat in Georgia, USA.

In January 2020, an 11-year-old, 5.8-kg, neutered male, domestic cat was examined for sneezing, wheezing, congestion, and rhinitis. This indoor/outdoor cat was negative for feline leukemia and feline immunodeficiency viruses. The cat showed no response to treatment with steroids and cefovecin sodium (Convenia; Zoetis, https://www.zoetis.com). From June 2019 through January 2020, the nasal planum became rounded and disfigured. A biopsy sample submitted to a private diagnostic laboratory indicated a fungal infection containing organisms suggestive of Cryptococcus spp. Because of concerns over the zoonotic potential of Cryptococcus spp., the cat was euthanized and submitted for postmortem examination. 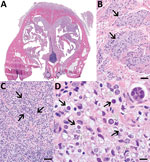 Figure. Histologic lesions associated with protothecosis caused by Prototheca cutisin a cat. A) Subgross cross-section of the nasal turbinates showing marked expansion of the nasal epithelium and overlying subcutaneous...

Gross reflection of the skin revealed that a locally extensive area of connective tissue and musculature overlying ≈70% of the nasal bridge and dorsal nasal planum was diffusely soft, variably tan to light orange, and mildly gelatinous (Appendix Figure 1). Microscopic evaluation revealed a severe granulomatous nodular dermatitis, panniculitis, cellulitis, pyogranulomatous osteomyelitis, and rhinitis (Figure). Disseminated throughout the nasal turbinates were numerous free and intrahistiocytic sporangia with and without endospores (Figure). Although these findings suggest previously resolved infection in the skin, subcutis, and muscle and active infection in the nasal turbinates, the initial site of infection (cutaneous vs. nasal turbinates) and disease pathogenesis could not be definitively determined (Appendix).

Fungal culture yielded white colonies growing in the presence and absence of light at 30°C (Appendix Figure 2). Cytologic examination revealed colonies of round cells with internal septations and thick walls resembling sporangia and endospores, which were identified with lactophenol cotton blue stain (Appendix Figure 2). Sporangia were gram positive, although they appeared to be unevenly stained (Appendix Figure 2). Genus and species were not identified by matrix-assisted laser desorption ionization/time-of-flight mass spectrometry and GEN III Microbial identification (Biolog, https://www.biolog.com). Partial sequencing of the internal transcribed spacer region and the D1/D2 region of the 28S rRNA gene yielded sequences 96% and 99% homologous to those from P. cutis available in BLAST (https://blast.ncbi.nlm.nih.gov) and CBS-KNAW (https://www.knaw.nl, currently Westerdijk Fungal Biodiversity Institute) databases.

We performed susceptibility testing for antifungal and antimicrobial drugs because both have been used against Prototheca spp. infections in animals (7,8). The isolate showed high MICs for fluconazole and itraconazole and a low MIC for amphotericin B (Table). Resistance to fluconazole and susceptibility to amphotericin B are well recognized for other Prototheca species (9); however, resistance to itraconazole could be unique to P. cutis. MICs were high for most antimicrobial drugs, including cefovecin, which had been unsuccessful in treating the cat (Table). Oxacillin, pradofloxacin, and trimethoprim/sulfamethoxazole inhibited growth at the lowest concentrations, indicating in vitro sensitivity to these drugs. We further investigated whether resistance genes from the whole-genome sequence corresponded to phenotypic resistance. We used the Comprehensive Antibiotic Resistance Database (https://card.mcmaster.ca) to identify genes conferring resistance to β-lactams, tetracyclines, aminoglycosides, chloramphenicol, and vancomycin. Consistent with MICs, no resistance genes corresponded to pradofloxacin and trimethoprim/sulfamethoxazole (Table). The MIC data provided here may be helpful for establishing future clinical breakpoints for Prototheca spp.

Our primary concern with regard to this case was determining the zoonotic potential of the agent, which was initially misdiagnosed as Cryptococcus spp. Although Prototheca spp. are widely considered to be zoonotic agents, reports of definitive cases of zoonotic transmission are lacking in the literature. Zoonotic transmission from bovids is thought to occur via consumption of contaminated milk (10). The zoonotic potential of P. cutis is unclear; infectivity is probably similar to that of other Prototheca spp.

Our report of P. cutis isolation from a cat reinforces protothecosis as an emerging infectious disease of humans and animals. We emphasize the potential of P. cutis to infect presumably immunocompetent hosts. The veterinary and human medical communities should be aware of the unusual clinical, pathologic, and microbiological manifestations of protothecosis.

Dr. Maboni is a board-certified veterinary microbiologist working as an assistant professor at the University of Guelph, Canada. Her primary research interests are medical diagnosis of bacterial and fungal diseases.

We thank the talented histology and microbiology technicians at the Athens Veterinary Diagnostic Laboratory for their technical assistance, especially Paula Bartlett and Amy McKinney.

Page created: December 31, 2020
Page updated: February 22, 2021
Page reviewed: February 22, 2021
The conclusions, findings, and opinions expressed by authors contributing to this journal do not necessarily reflect the official position of the U.S. Department of Health and Human Services, the Public Health Service, the Centers for Disease Control and Prevention, or the authors' affiliated institutions. Use of trade names is for identification only and does not imply endorsement by any of the groups named above.

Genomic and Pathologic Findings for Prototheca cutis Infection in Cat