We report a norovirus GIV outbreak in the United States, 15 years after the last reported outbreak. During May 2016 in Wisconsin, 53 persons, including 4 food handlers, reported being ill. The outbreak was linked to individually prepared fruit consumed as a fruit salad. The virus was phylogenetically classified as a novel GIV genotype.

Norovirus is the leading cause of epidemic and endemic acute gastroenteritis globally. The virus can be transmitted through person-to-person contact, consumption of fecally contaminated food or water, or self-contamination after touching contaminated environmental surfaces (1,2). Noroviruses are divided into at least 10 genogroups (G), and viruses in GI, GII, GIV, GVIII, and GIX cause illness in humans (3). More than 99% of all norovirus outbreaks are caused by GI and GII viruses in the United States (4). GVIII includes 2 strains that have been detected in Japan during 2004 and 2011 (3), and GIX has caused 11 reported outbreaks in the United States since 2013 (https://www.cdc.gov/norovirus/reporting/calicinet/data.html).

GIV is divided into 2 recognized genotypes: GIV.1, which infects humans (5), and GIV.2, which infects canines and felines (6). GIV viruses were reported in humans in the Netherlands during 1998 and the United States during 1999 (7,8) and have since been sporadically reported in clinical and environmental samples (5,9–11). An outbreak linked to a GIV norovirus in the United States has not been reported since 2001 (4,8). In this article, we describe a 2016 foodborne norovirus outbreak associated with a novel GIV strain (tentatively GIV.NA).

On May 6, 2016, the Wisconsin Department of Public Health was notified of a possible norovirus outbreak. The outbreak occurred at a breakfast event held at a restaurant on May 3, 2016, for local business owners (Figure 1). According to interviews of the affected group, 49 attendees and 4 food handlers reported being ill, and the first case was reported on May 4, 2016. The peak of illness occurred 48 hours after the breakfast event. Symptoms included diarrhea, vomiting, and nausea (Table 1). Duration of illness was 1–5 days (median 2 days), and incubation time range was 15–57 hours (median 38 hours).

On the basis of the epidemiologic investigation, pathogen transmission occurred through foodborne exposure, and the highest risk ratio was linked to individually eaten fruit from a fruit salad served at the breakfast (risk ratio 2.17–3.29) (Table 2). The epidemiologic curve and risk ratios were calculated by using Microsoft Excel (https://www.microsoft.com) and R software (http://www.r-project.org). The food handlers prepared the fruit, which was served as a fruit salad during the meal on May 2, the day before the breakfast. Reportedly, the strawberries and grapes were washed, whereas the melons were not. There was no leftover fruit available for laboratory testing.

Nucleic acid was extracted from stool samples collected from 6 ill persons and tested for norovirus GI/GII by real-time quantitative reverse transcription PCR (qRT-PCR), and 5 GII-positive samples (from 3 attendees and 2 food handlers) with high cycle threshold values (range 28–37) were amplified by conventional RT-PCR targeting a partial region of the 5′ end of open reading frame 2 (4). The sequences did not cluster with any GI or GII norovirus reference sequences and closely matched GIV viruses (4). 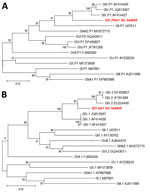 Next-generation sequencing (NGS) was performed on 3 samples and verification of final consensus sequences was performed by using Geneious version 11.1.2 (Biomatters Inc., https://www.newjerseybids.us) (4). Sequences for all 3 near complete genomes (≈7,490 nt) were identical (GenBank accession no. NC_044855). The closest polymerase gene sequence in GenBank had a 79% nt similarity (Figure 2, panel A), and the capsid sequence matched partial capsid sequences derived from wastewater in Brazil, Japan, and the United States with a 98% nt identity. The closest complete major capsid sequence in GenBank (accession no. AF414426) had a 76% aa identity (Figure 2, panel B).

We report a novel norovirus GIV genotype as the causative agent of a foodborne norovirus outbreak. Norovirus GIV outbreaks are rare and were reported in the Netherlands during 1998, the United States during 1999, and in Australia during ­­­­­2010 (5,7,8) and have since been detected sporadically in clinical samples (9–11). However, seroprevalence studies in Italy, the Netherlands, and the United States have shown that 19%–31% of these populations have antibodies against GIV (12–14). Possible explanations include that most laboratories do not test for norovirus GIV or most infections are asymptomatic or do not lead to a visit to a physician. However, 3 young children who were positive for GIV in a study in Italy had severe endemic acute gastroenteritis symptoms (10).

Several studies have detected norovirus GIV in rivers and wastewater (9–11,15); the number of positive samples ranged from 8.2% to 34%, further supporting that norovirus GIV is circulating in the general population. Several short sequences detected in wastewater collected in Brazil, Japan, and the United States match the capsid sequence in our study (9,15). However, new norovirus genotypes require >2 nonidentical complete capsid sequences from different geographic locations that form a separate phylogenetic cluster (3) Therefore, the virus detected in this outbreak cannot officially be assigned as GIV.3 yet but is assigned GIV.NA1[PNA1].

Detection of a norovirus GIV strain associated with a foodborne outbreak shows that despite the absence of reported GIV norovirus outbreaks over the past 15 years in the United States, these viruses continue to circulate in the human population. Because samples from endemic acute gastroenteritis outbreaks are typically tested only for noroviruses GI and GII, including testing of norovirus-negative samples for GIV might improve determining endemic acute gastroenteritis outbreaks of unknown etiology.

Ms. Barclay is a microbiologist at the National Calicivirus Laboratory, Division of Viral Diseases, National Center for Immunization and Respiratory Diseases, Centers for Disease Control and Prevention, Atlanta, GA. Her primary research interest is surveillance of noroviruses and other viral gastroenteritis viruses.

We are grateful to Rachel Klos for providing epidemiologic data as part of the outbreak investigation, Kshama Aswath and Anna Montmayeur for performing NGS and sequence analysis of full-length genomes, and Preeti Chhabra for quality checking the NGS sequences and uploading the final sequence to GenBank.

Page created: January 19, 2021
Page updated: March 18, 2021
Page reviewed: March 18, 2021
The conclusions, findings, and opinions expressed by authors contributing to this journal do not necessarily reflect the official position of the U.S. Department of Health and Human Services, the Public Health Service, the Centers for Disease Control and Prevention, or the authors' affiliated institutions. Use of trade names is for identification only and does not imply endorsement by any of the groups named above.