Gonorrhea, a sexually transmissible infection (STI) caused by Neisseria gonorrhoeae, is the second most common bacterial STI (1). Most gonorrhea cases are mild, but serious complications can occur. Gonorrhea is treated with antibiotics, and the recommended treatment is dual extended-spectrum cephalosporin (ESC)/azithromycin therapy or ceftriaxone monotherapy (2).

One of the main characteristics of N. gonorrhoeae is the plasticity of its genome, favoring the acquisition and dispersion of antimicrobial resistance (AMR). AMR is an increasing issue for gonorrhea treatment, and untreatable gonorrhea represents an imminent global health threat (3).

This study encompassed 1,318 N. gonorrhoeae isolates collected in Austria during 2016–2020; isolates were available at the National Reference Centre for Gonococci. We tested all isolates for phenotypic resistance to azithromycin, cefixime, ceftriaxone, ciprofloxacin, tetracycline, and benzylpenicillin, as well as production of β-lactamase (i.e., cefinase positive) (Appendix). We followed European Committee on Antimicrobial Susceptibility Testing guidelines (4) to determine MIC thresholds used in this study.

Figure 1. Antimicrobial resistance in 1,318 Neisseria gonorrhoeaeisolates, Austria, 2016–2020. A) Number of isolates classified as susceptible, intermediate, or resistant. For ceftriaxone, isolates with reduced susceptibility are indicated in blue.... 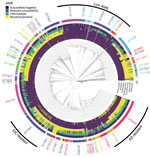 The isolates belonged to 119 different STs in mutlilocus sequence typing, including 23 newly defined (STs 15803–15825). The most prevalent STs were ST7363 (170 isolates), ST9363 (151 isolates), and ST8156 (113 isolates), which comprised 33% of the isolates. We identified 215 NG-MAST types for 873/1,318 isolates; the most prevalent STs were 12302 (73 isolates), 5441 (59 isolates), and 387 (50 isolates). cgMLST showed a branch including isolates with no or little AMR (Figure 2). We found no clear correlation with the cgMLST classification for penicillin, cefinase, tetracycline, and ciprofloxacin resistance. All cefixime-resistant isolates belonged to a single branch of ST7363 isolates, which also contained 24/32 isolates with reduced susceptibility to ceftriaxone. This branch had above average rates of ciprofloxacin, tetracycline, and penicillin resistance. A branch containing ST9363 and ST11422 isolates had a high rate of azithromycin resistance.

This study combined phenotypic AMR and genomic data to analyze N. gonorrhoeae strains isolated in Austria during 2016–2020. We used a convenience sample (National Reference Centre for Gonococci collection) and results should be interpreted in light of this limitation. The percentage of N. gonorrhoeae strains resistant to azithromycin, ciprofloxacin, and tetracycline, or producing β-lactamase was increasing during the study period. The rate of azithromycin resistance rate was >13% during 2019–2020, which was high considering that an azithromycin/cefixime combination is a standard treatment for gonorrhea (2). We found no ceftriaxone-resistant isolates, and cefixime resistance rate was low.

We performed isolate typing by using multilocus sequence typing, N. gonorrhoeae multiantigen sequence typing (NG-MAST), and cgMLST. Only 37 isolates belonged to ST1901, which was predominant in isolates from Austria in a European study in 2013, highlighting the fast diversification of N. gonorrhoeae (9). The most common NG-MAST type was 12302; all isolates belonged to ST9363 and 71% were resistant to azithromycin. NG-MAST type 12302 and ST9363 have been associated with azithromycin resistance in other studies (10,11). cgMLST classification highlighted 3 branches with specific AMR patterns: 1 with low rates of AMR, 1 including azithromycin-resistant isolates, and 1 including ESC-resistant isolates. Previous studies comparing AMR and phylogenomic distributions in different countries showed either that azithromycin/ESC resistance emerged repeatedly in different networks or that their spread was largely clonal (12,13). In Austria, azithromycin and ESC resistance clustering was in favor of single introductions. The use of cgMLST among available classification methods has limitations (i.e., no counting of mutations within 1 gene, exclusion of intergenic regions, and resolution) but also advantages (i.e., no correction of recombination events necessary and one scheme fitting all isolates). This tool corresponds to the need for surveillance, where its lower resolution does not have a major effect.

Our study provides an overview of the N. gonorrhoeae strains circulating in Austria and their evolution over the past 5 years, both at the phenotypic and genomic level. It also underlines the benefits of genomic surveillance of N. gonorrhoeae, which can support epidemiologic investigations and provide information on specific genes and alleles thought to confer AMR (14).

Dr. Schaeffer is a public health microbiologist at the Austrian Agency for Health and Food Safety, Vienna, Austria. Her research interests include emerging pathogens, severe human diseases, and genomic analysis.

We thank the staff of the Gonococci National Reference Centre and other partner institutions for the collection, isolation, and characterization of the study isolates. We thank Loredana Ingrosso for her feedback throughout the project and on the manuscript.

All co-authors in this manuscript declare that no funding was received from any funding agency in the public, commercial, or not-for-profit sectors. J.S. was supported by a grant from the European Public Health Microbiology Training Programme, European Centre for Disease Prevention and Control (grant agreement no. 1 ECD.7550, implementing ECDC/GRANT/2017/003).

Page created: June 23, 2022
Page updated: July 20, 2022
Page reviewed: July 20, 2022
The conclusions, findings, and opinions expressed by authors contributing to this journal do not necessarily reflect the official position of the U.S. Department of Health and Human Services, the Public Health Service, the Centers for Disease Control and Prevention, or the authors' affiliated institutions. Use of trade names is for identification only and does not imply endorsement by any of the groups named above.