To determine the origin of hepatitis E virus in the Czech Republic, we analyzed patient clinical samples. Five isolates of genotypes 3e, 3f, and 3g were obtained. Their genetic relatedness with Czech strains from domestic pigs and wild boars and patient recollections suggest an autochthonous source likely linked to consumption of contaminated pork.

Hepatitis E virus (HEV) is a leading cause of epidemics and sporadic cases of enterically transmitted hepatitis worldwide. The zoonotic potential of HEV was recognized recently, and pigs and other animal species were considered natural reservoirs for the virus (1). Currently, mammalian HEV strains segregate into 4 major genotypes. The relative conservation of genotypes 1 and 2 corresponds to their primary circulation within humans. Genotype 1 consists of epidemic strains from developing countries in Asia and Africa, and representatives of genotype 2 have been described in Mexico and African countries. The diversity of genotypes 3 and 4 is related to their origin from a variety of animal species. Genotype 3 is widely distributed and has been isolated from patients with sporadic cases of acute hepatitis E worldwide. Genotype 4 contains strains of human and animal origin, especially in isolates from Asian countries (2,3).

In the Czech Republic, hepatitis E incidence has been increasing since the first case was described in 1996. From 1996 through 2005, a total of 159 cases of HEV infection were reported; 23% of those cases were associated with travel to industrialized countries (4). In 2005, 37 hepatitis E patients were reported in the Czech Republic, while in 2009 the number increased to 99 (5). On the basis of these data, extensive genomic variability among HEV isolates and their known geographic distribution, we conducted a phylogenetic analysis of HEV isolates from clinical samples of Czech patients with acute hepatitis E to determine the origin of the infection.

Two hundred and fifty milligrams of stool sample was suspended in 2.25 mL of phosphate-buffered saline, homogenized by vortexing, and clarified by centrifugation at 3,000× g for 15 min. RNA was extracted from 140 μL of supernatant by using the QIAamp Viral RNA Kit (QIAGEN, Hilden, Germany), according to the manufacturer’s instructions. A positive template control was isolated from swine feces positive for HEV RNA from a previous study (6), and a water sample was included as a negative control.

Detection of HEV RNA was performed by nested reverse transcription-PCR with 2 sets of degenerate primers that targeted open reading frame 1 (ORF1) and the overlapping part of ORF2 and ORF3 (ORF2/3) of the HEV genome as described previously (6). Nondiluted and 10-fold diluted samples of isolated RNA were analyzed. Subsequently, the specific PCR product (length 242 bp, ORF1 primers) obtained from 2 independent RNA isolations was prepared for sequencing by the QIAquick PCR Purification Kit (QIAGEN). Both strands were sequenced at Eurofins MWG Operon (Ebersberg, Germany).

The sequencing and phylogenetic analysis were carried out by using MEGA version 3.1 software (www.megasoftware.net). The method of neighbor-joining with 1,000 replications in the bootstrap test was used for phylogenetic analysis (7), and bootstrap values >50% were considered significant. The 5 most similar HEV sequences available in GenBank database were chosen for each presented Czech human HEV isolate (isolate CZhHEV), according to the BLAST algorithm (http://blast.ncbi.nlm.nih.gov/Blast.cgi). Selected sequences were supplemented with representatives of genotype 3e (strain G2, GenBank accession no. AF110389), 3f (strain G1, accession no. AF110388), and 3g (strain Osh 205, accession no. AF455784) (2).

HEV RNA was detected in clinical samples from 6 of 10 patients whose samples were tested. Results obtained by using primers specific for ORF1 and ORF2/3 of the HEV genome were in agreement, except for material from 1 patient. Specific PCR products of 5 CZhHEV isolates were sequenced (Table A1). The sequence analysis showed that sequences of CZhHEV isolates shared a homology of 81.4% (CZhHEV107-09 and CZhHEV113-09) to 100.0% (CZhHEV113-09 and CZhHEV114-09). 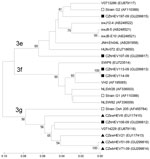 We tested stool samples of 10 patients with serologically confirmed acute hepatitis E and, despite this confirmation, have detected HEV RNA in only 6 of these patients (Table A1; Figure). Most serologic assays for diagnosing hepatitis E use recombinant proteins of genotypes 1 and 2, and these tests may be less sensitive and specific for detection of genotypes 3 and 4 of genus Hepevirus (8,9). These results were confirmed by a study performed in the Czech Republic, which showed that 28 (47.5%) of 59 IgM anti-HEV positive cases were in fact false positives (unpub. data).

According to Lu et al. (2), subtypes 3c, 3e, 3f, 3h, and 3i have been mainly identified in Europe and subtype 3g in Asia. In our study, isolates CZhHEV107-09 and CZhHEV197-09 were genetically related to subtype 3e, while identical CZhHEV113-09 and CZhHEV114-09 belonged to subtype 3f. Isolate CZhHEV108-09 clustered with subtype 3g and a strain from a wild boar from the Czech Republic (CZwbHEV51-09) and a strain from a human in Germany that was associated with consumption of wild boar meat, offal, and locally produced meat products (10). These findings supported the idea of zoonotic transmission of HEV. Moreover, other Czech strains from domestic pigs belonged also in subtypes 3g and 3f (Figure).

The patient from whose stool isolate CZhHEV108-09 was identified reported eating homemade pig-slaughter products 1 month before the first symptoms of hepatitis E and also visiting sushi bars in Germany that served grilled pork. As Lupulovic et al. (11) reported, the prevalence of anti-HEV immunoglobulin (Ig) G in pigs raised in family backyards is similar to the prevalence in those bred on commercial farms. Thus, infection obtained during home slaughter is probable. On the other hand, Germany is one of the biggest exporters of domestic pigs and pork meat into the Czech Republic. Based on geographic closeness, circulation of subtype 3g between the 2 countries is possible. Moreover, that HEV infection resulted from the consumption of insufficiently heat-treated meat in sushi bars cannot be excluded.

The identity of sequences of isolates CZhHEV113-09 and CZhHEV114-09 has strongly hinted at an identical source of HEV. Both patients lived in the same city and had overlapping times of hospitalization. Furthermore, the patients reported consumption of pork and that they used the same knife and chopping board for raw and cooked meat (Table A1). Therefore, cross-contamination during the meat processing is probable.

Ms Vasickova is a researcher in the Department of Food and Feed Safety at the Veterinary Research Institute in Brno, Czech Republic. Her primary research interests include qualitative and quantitative detection of HEV in biological samples and genetic variability of HEV.