Among immunosuppressed persons in industrialized countries, hepatitis E virus (HEV) is a cause of sporadic acute viral hepatitis and chronic hepatitis (1,2). In the United States, liver test results are often abnormal for HIV-infected persons; however, few studies have evaluated whether HEV is a cause of hepatitis in this population (3).

We retrospectively evaluated HIV-infected persons for whom alanine aminotransferase (ALT) levels had increased acutely (>5 × the upper limit of normal) during the HIV epidemic (1985–2009). Eligible participants were US military beneficiaries (persons entitled to receive care at a military treatment facility) for whom a stored serum specimen, collected from 3 days before ALT increase through 180 days after ALT increase, was available for HEV testing. A case of acute HEV infection was defined as a sample with HEV RNA and/or IgM against HEV or evidence of IgG seroconversion. All samples collected at the time of ALT increase were tested for IgM and IgG against HEV by using commercially available enzyme immunoassays (Diagnostics Systems, Nizhniy Novgorod, Russia) (4) and PCR for HEV RNA (5). The testing strategy is shown in Figure 1. All positive results were verified by retesting.

Statistical analyses included descriptive statistics presented as numbers (percentages) for categorical variables and medians (interquartile ranges [IQRs]) for continuous variables. The percentage of participants with HEV infection was defined as the number with an initial positive result for IgM or IgG against HEV divided by the total number of evaluable study participants. To compare characteristics among those with and without HEV infection, we used Fisher exact testing for categorical variables and rank-sum testing for continuous variables. A multivariate logistic regression model was used to identify factors associated with HEV infection. All analyses were performed by using Stata version 10.0 (StataCorp LP, College Station, TX, USA).

Samples for HEV testing were available at a median of 27 (IQR 0–104) days after the increase in ALT level. For 13 (6.7%) participants, IgM and/or IgG against HEV were present at the time closest to the ALT increase; antibody prevalence among those with elevated ALT levels did not increase during the HIV epidemic (χ2 0.76, p = 0.68). The 13 HIV-infected persons who were HEV seropositive (IgM or IgG at ALT spike) were similar to the 181 who were HEV seronegative in terms of demographics, military duty status, laboratory data, and overseas travel (Table 1). HEV-seropositive persons had higher plasma HIV RNA levels (4.7 vs. 4.1 log10 copies/mL, p = 0.04) and the association with lower CD4 cell counts was borderline (median 217 vs. 439 cells/mm3, p = 0.07). In the multivariate logistic regression model adjusted for age, plasma HIV RNA levels remained significantly associated with HEV seropositivity (odds ratio 1.96 per log10, 95% CI 1.04–3.71, p = 0.04). 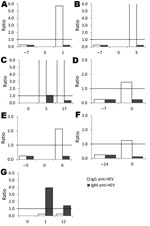 Figure 2. IgM and IgG against hepatitis E virus (HEV) signal/cutoff ratios for 7 HIV-infected US military beneficiaries with acute HEV infection, 1985–2009. Serum specimens were tested for HEV markers before and after...

Additional testing was conducted for all 13 participants with IgM or IgG against HEV or with HEV RNA at the time of ALT increase (Figure 1). HEV RNA was detected in 1 participant who also seroconverted (IgG) at the time of ALT increase. According to samples collected at or near ALT spike and after ALT spike, 5 more participants seroconverted. One participant had IgM detectable in all 3 samples (at or near ALT spike, after ALT spike, and at follow-up); the participant did not seroconvert, and HEV RNA was not detectable in any sample. In total, 7 (3.6%, 95% CI 1.6%–7.6%) of the 194 HIV-infected persons had evidence of acute HEV infection at time of ALT spike (Figure 2). HEV was deemed not to be the cause of the ALT spike for 5 participants with evidence of prior HEV infection because IgG positivity preceded the ALT increase. For 1 participant, IgM was found in only 1 sample; all other samples were negative for IgM, IgG, and HEV RNA. Because of unconfirmed positive follow-up results, this participant was excluded from further analysis.

HEV infection accounted for 4% of acute liver abnormalities among HIV-infected persons. Overall, HEV was detected in 6% of HIV-infected participants, similar to the 5%–21% reported earlier from the United States (1,6). Because study participation was limited to persons who had a sample available for HEV testing near the time of ALT increase, we might have missed cases of HEV infection. Overall, on the basis of our study and data from other industrialized countries (7,8), HEV is a cause of liver abnormalities in HIV-infected persons but does not seem to be more common in this population than in the general population.

HEV seropositivity did not increase over the course of the HIV epidemic. Despite increasing reports of HEV among HIV-infected persons and the general population (1,3,7–10), this increase is probably associated with increased recognition and testing. Recent studies in the United States and Europe have shown that HEV seroprevalence is stable or decreasing (1,11).

We propose that a diagnosis of HEV infection be considered for persons with viral-like hepatitis. Serologic test results may be negative despite ongoing HEV infection; hence, for HIV-infected persons (especially those with low CD4 cell counts), PCR testing for HEV RNA should be conducted (7). Because HEV infection may be fulminant in the presence of underlying liver disease (common among HIV-infected persons) (14) and may lead to chronic infection in immunosuppressed persons (2,13), testing should be considered for these persons as treatment options for HEV infection evolve. Moreover, chronic HEV infection may be averted by reducing the level of immunosuppression (15) and use of highly active antiretroviral therapy (3,8), but more data are needed to support these measures.

We thank Tracy Green-Montfort and Ngoc-Thao Le for their help with HEV testing and Chong-Gee Teo for his critical review of the manuscript.

Support for this work (IDCRP-000-21) was provided by the Infectious Disease Clinical Research Program, a Department of Defense program executed through the Uniformed Services University of the Health Sciences. This project has been funded in whole, or in part, with federal funds from the National Institute of Allergy and Infectious Diseases, National Institutes of Health, under Inter-Agency Agreement Y1-AI-5072.

Dr Crum-Cianflone is an infectious disease staff physician at the Naval Medical Center San Diego, adjunct professor at San Diego State University, and a voluntary associate professor of medicine at the University of California San Diego. Her research has focused on complications and co-infections among HIV-infected persons.

1Members are listed at the end of this article.