We screened plasma samples (minipools of 96 samples, corresponding to 53,234 blood donations) from France that had been processed with solvent–detergent for hepatitis E virus RNA. The detection rate was 1 HEV-positive sample/2,218 blood donations. Most samples (22/24) from viremic donors were negative for IgG and IgM against HEV.

Hepatitis E virus (HEV), family Hepeviridae, genus Hepevirus, is a small nonenveloped RNA virus that has an icosahedral capsid and is transmitted by the fecal–oral route (1). Transfusion-transmitted HEV infections have been documented in several countries in Europe and Asia (2–4). HEV has also been detected in human blood products (5–12). Despite considerable geographic variation in HEV seroprevalence in Europe, southern France seems to be an area to which this virus is hyperendemic (13).

We conducted a prospective study in France of minipools of plasma from blood donations that were processed with solvent–detergent and used standardized molecular assays for detection of HEV RNA. Data obtained were used to estimate the detection rate of HEV infections in blood donors in France and the risk for HEV transmission by blood transfusion. 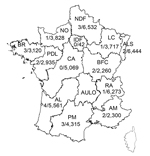 Since November 27, 2012, systematic nucleic acid amplification screening for HEV has been used on blood donations (pools of 96 samples) in France for a 70-L plasma pool that was processed with solvent–detergent. A mixture of 96 plasma samples (50 µL from each sample) was prepared by using a distributor (Tecan, Männedorf, Switzerland) to give a final volume of 4.8 mL. Simultaneously, a 96-well archive microplate was used for serologic testing and to identify individual HEV RNA–positive samples. Plasma samples were collected at 13/14 regional blood transfusion establishments of the French Blood Service in continental France (Figure 1).

HEV RNA was extracted by using the Nuclisens Easy MAG Instrument (bioMérieux, Marcy-l’Etoile, France). Amplification was performed by using the single-round RealStar Reverse Transcription PCR (Altona Diagnostics, Courtaboeuf, France), which is specific for the open reading frame 2 (ORF2)–ORF3 overlapping region (12); the 95% detection limit was 23 IU/mL. HEV RNA quantification was performed as described (14); the limit of quantification was 60 IU/mL. HEV genotyping was performed by sequencing a 305-nt fragment within the ORF2 region and performing phylogenetic analysis.

HEV RNA concentrations in 11 pools were below the limit of quantification, and the plasma pool with the highest virus load contained 29,796 IU/mL (Table 1). The range of virus load in individual plasma samples was 468 IU/mL–5,155 800 IU/mL. All strains that were available for sequence analysis were assigned to HEV genotype 3 (Technical Appendix). A total of 59% of the strains were subgenotype 3f and 36% were subgenotype 3c (Table 2).

Our study used plasma pools that contained 96 samples. Therefore, the true frequency of viremic samples could have been underestimated because of a dilution effect. The limit of detection of the PCR was low (<23 IU/mL). However, some pools could have been missed, although 5 positive individual donations having HEV RNA concentrations of 468 IU/mL–2,293 IU/mL were detected (Table 2).

The detection rate for viremic blood donations in southern France was 2-fold greater than that for the rest of France. This finding is consistent with a previously reported high seroprevalence (52%) of IgG against HEV in blood donors (13) and the high incidence (3.2%) of infection documented by molecular techniques in local transplantation patients (15). However, HEV-positive blood donations were detected in all but 2 of the regions of continental France tested. All strains were genotype 3 and the proportions of subgenotypes 3f and 3c strains was similar to those observed in HEV-infected pigs in France, which suggested a zoonotic origin of the 24 HEV infections as reported by Kamar et al. (1).

Infections were detected at an early stage because serologic markers were absent for >90% of the cases. Since November 2012, testing for HEV RNA has reduced the risk for HEV transmission in patients in France who are given plasma processed with solvent–detergent. This testing helps overcome the situation that this treatment does not inactivate HEV, a nonenveloped virus. In January 2015, nucleic acid amplification testing for HEV will begin in Europe for plasma processed with solvent–detergent.

We detected IgG against HEV in nearly all plasma pools, and IgG concentrations ranged from 0.3 U/mL to 10.6 U/mL. The potential of antibodies against HEV to neutralize virus infectivity if the unit is transfused is unknown, but a recent study indicated that IgG against HEV at a concentration of <10 U/mL cannot protect immunocompromised patients against reinfection (15).

Our findings should be useful for determining the best safety measures to prevent HEV transmission by blood transfusion. The implementation of nucleic acid amplification testing relies on full assessment of transfusion risk in exposed patients and the cost-effectiveness of different strategies.

Dr Gallian is a biologist at the French Blood Agency, Marseille, France. His research interests include HEV and other emerging blood-borne pathogens.