Eritrea, which is located in the Horn of Africa, has reduced malaria mortality and incidence rates extensively over the past decade (1,2). This reduction is attributed largely to integrated vector management, early diagnosis, and effective treatment implemented by the national malaria control program (NMCP). However, malaria remains a public health concern because there were ≈65,000 cases and 5 million persons living in malaria-prone areas in 2015 (3). Malaria is unstable in Eritrea, and seasonal and transmission patterns vary across 3 ecologic zones. Plasmodium falciparum infection accounts for ≈70% of confirmed malaria cases and P. vivax for the remaining ≈30% (4).

Microscopy remains the mainstay of malaria diagnosis at hospitals. Rapid diagnostic tests (RDTs) were introduced at the community level and primary health facilities in 2006, which paved the way for implementation of artemisinin-based combinations as first-line treatment in 2007. RDTs that detect P. falciparum and P. vivax simultaneously by targeting histidine-rich protein 2 (HRP2) and P. vivax plasmodium lactate dehydrogenase (pLDH), and met the World Health Organization (WHO)–recommended procurement criteria (5) were implemented in Eritrea with a quality assurance program that included training operators regularly and testing RDT lots before distribution.

In 2014, the NMCP received reports of false-negative RDT results in microscopically confirmed cases of P. falciparum and P. vivax malaria at several health facilities. The RDTs involved were from 10 lots that had passed testing at a WHO–Foundation for Innovative New Diagnostics lot-testing laboratory. To address this issue, the Ministry of Health (MOH) conducted exploratory investigations at 12 health facilities located in 4 regions of Eritrea and used different brands of RDTs. Results showed an overall false-negative result rate of 80% (41/50) for microscopically confirmed cases of P. falciparum malaria (6).

Deficiencies in RDT storage and operational issues were ruled out as causes of the false-negative results. Furthermore, samples of deployed RDTs were retrieved from the field and retested at a WHO–Foundation for Innovative New Diagnostics lot-testing laboratory against well-characterized reference samples. All RDTs passed testing, further suggesting that RDT quality issues did not cause false-negative results for P. falciparum (6). The cause of false-negative results for P. vivax was believed to be low parasite density. On the basis of these findings, the MOH recalled the RDTs and investigated P. falciparum–specific parasite factors, such as presence of P. falciparum lacking HRP2, as a primary cause.

HRP2-based RDTs target parasite HRP2, and some cross-react with HRP3 because of sequence similarities between the 2 proteins. P. falciparum lacking HRP2 and HRP3 caused by deletions of genes encoding these antigens (pfhrp2 and pfhrp3) in clinical cases were first reported in the Amazon region of Peru (7) and subsequently in Colombia (8), Suriname (9), and Brazil and Bolivia (10) (prevalence 4%–41%). The high prevalence of pfhrp2-negative parasites in Peru correlated with poor performance of HRP2-based RDTs (11) and led WHO to recommend using non–HRP2-based RDTs for case management in affected areas.

Eritrea is divided into 6 administrative regions. This study was conducted at Ghindae Hospital and Massawa Hospital in the Northern Red Sea Region (Figure 1) in March 2016. These locations were selected because of the timing of the malaria transmission season, easy access to infrastructure, and a high incidence of false-negative RDT results reported in this region (6).

Each dried blood spot was processed into 3 discs from which genomic DNA was extracted by using QIAamp DNA Mini Kits and a QIAcube Robot (QIAGEN, Crawley, UK) according to the manufacturer’s instructions. DNA was eluted into a volume of 100 µL, and 10 µL was used in each PCR. An 18S rRNA gene-based multiplex PCR (20) was used to determine whether 4 human Plasmodium spp. were present in each sample.

Characterization of pfhrp2 and pfhrp3 Gene Deletions and Flanking Genes

HRP2 levels were measured for each sample by using Luminex mulitplex bead-based immunoassay described elsewhere (22). Dried blood spots were incubated overnight in elution buffer (0.05% phosphate-buffered saline, Tween 20, 0.05% NaN3) to give a 1:20 dilution of whole blood. A 50-µL elution was used in each assay. The threshold mean fluorescence intensity minus background (MFI – bg) signal that indicated true negativity for HRP2 was derived by testing 86 blood samples from a setting to which malaria was not endemic. The MFI – bg positivity cutoff value was the lognormal mean ± 3 SD for this malaria-negative population.

We determined haplotypes for each parasite isolate from 7 microsatellite markers and used for genetic diversity and genetic relatedness analysis among parasites from Eritrea and between parasites from Eritrea and Peru (23) by using PHYLOViZ software (24). We calibrated sizes of 7 microsatellite markers against those of P. falciparum strain 3D7 before conducting genetic relatedness analysis, using a cutoff value of 2 (minimum differences for 2 loci) to compare parasites. We calculated expected heterozygosity (HE) values for each of the 7 microsatellite markers by using FSTAT software (https://www2.unil.ch/popgen/softwares/fstat.htm) and derived the mean HE for pfhrp2-positive and pfhrp2-negative parasite populations in Eritrea.

We conducted graphics and statistical analysis by using GraphPad Prism 7.00 for Windows (GraphPad Software, La Jolla, CA, USA). Parasite densities were log-transformed for analysis and the geometric mean is reported. We used a Mann-Whitney test to compare log parasite densities between hospitals and between pfhrp2-positive and pfhrp2-negative parasites.

The study was approved by the Eritrean MOH Research and Ethical Committees. The Northern Red Sea branch of the MOH and authorities of the 2 hospitals were informed, through an official letter, on the scope, coverage, and objectives of the study.

Patients were enrolled after providing consent following a detailed explanation about the investigation. Data from patients were recorded on structured forms. All patient specimens were given a unique identification number after collection, and only this number was used for data linkage.

A total of 51 patients recruited from the 2 hospitals participated in the study. We obtained characteristics for all of these patients (Table 1).

Microscopy at the NRL confirmed 50 infections only with P. falciparum and 1 infection only with P. vivax. These results were confirmed by PCR; no mixed infections or infections with other Plasmodium species were identified. The 1 infection with P. vivax was excluded from further analysis. The number of P. falciparum–infected patients was approximately equal between the hospitals, and patients from the 2 hospitals had comparable parasite densities (p = 0.47) (Table 1).

Presence or Absence of pfhrp2- and pfhrp3-Negative Genes

Presence or Absence of Genes Flanking pfhrp2 and pfhrp3

Figure 4. Number and frequency of Plasmodium falciparum haplotypes detected in patients at 2 hospitals, Eritrea, by hospital (A) and by pfhrp2-positive versus pfhrp2-negative parasite populations (B). pfhrp, P. falciparum histidine-rich protein; – negative; +, positive. 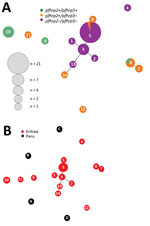 Since malaria RDTs became available in the 1990s, growth in the number of tests, manufacturers, and volumes sold has been exponential (25,26). In parallel, the proportion of fever case-patients having access to diagnostic services before treatment has also expanded, particularly in Africa, largely attributed to the implementation of HRP2-based malaria RDTs (3). To continue reducing malaria transmission, use of RDTs must be expanded further, and tests must remain affordable, accurate, and user friendly.

Our data showed that, in March 2016, a total of 80.8% (21/26) patients at Ghindae Hospital and 41.7% (10/24) at Massawa Hospital were infected with pfhrp2-negative parasites. All of these patients had undetectable levels of HRP2 in blood samples, and all showed negative results by HRP2-based RDTs and positive results by pan-pLDH–based RDTs. All samples were confirmed by microscopy and PCR as having only P. falciparum infections. Conversely, the remaining patient samples were pfhrp2 positive, and all showed positive results for HRP2-based and pan-pLDH–based RDTs, and had HRP2 concentrations >9.5 ng/mL. These data confirmed that false-negative RDT results were caused by parasites lacking pfhrp2.

Another useful finding of our study was the high prevalence of pfhrp3 gene deletions in samples from Eritrea, which resulted in a high prevalence of parasites with concomitant pfhrp2 and pfhrp3 gene deletions. Every sample that was pfhrp2-negative was also pfhrp3-negative, which showed that 2 genes on different chromosomes were deleted in parallel. It appears that the dual-deleted parasites (pfhrp2 negative/pfhrp3-negative) form clusters, and pfhrp2-positive/pfhrp3-negative parasites are scattered outside these clusters, suggesting that these parasites might have evolved from different genetic backgrounds. Although pfhrp3 status did not affect results of RDTs used in this study, this status could affect results of other RDTs because pfhrp3 shares sequence similarity with pfhrp2, and cross-reactivity between HRP2 and HRP3 has been reported for some RDTs (28). It is clear that regardless of the brand of HRP2-based RDTs used, parasites with dual pfhrp2 and pfhrp3 deletions will cause failure of RDTs because there is no possibility for cross-reactivity between HRP3 and HRP2 to occur.

A major issue is whether pfhrp2-negative parasites emerged locally and what is the main driving force behind their prevalence. In Peru, pfhrp2-negative parasites were detected in 4 of 5 major parasite populations during the late 1990s, and their prevalence increased in the absence of HRP2-based RDT pressure because microscopy was the primary diagnostic test used in that country (23). Spread of these parasites in Peru might have been driven by an undefined biological advantage associated with deletion of the pfhrp2 gene.

The presence of a unique pfhrp2-negative parasite outside the main cluster suggests that the pfhrp2 deletion has occurred at least twice in parasites in Eritrea. The pfhrp2-negative parasites in Eritrea and Peru showed distinct haplotypes, strongly suggesting de novo development of these parasites in both locations. This suggestion would imply that all malaria-endemic areas are at risk and that there is an urgent need to map the prevalence of pfhrp2-negative parasites to inform case management policy. The immediate mapping priority should be for countries/areas near Eritrea. It is also critical for research and development and improvements in alternative biomarkers of P. falciparum. Currently, there is only 1 P. falciparum and 1 P. falciparum/P. vivax–detecting RDT specific for pLDH that meet WHO procurement criteria. Most manufacturers have difficulties in producing RDTs that can consistently detect P. falciparum at a concentration of 200 parasites/µL by using antibodies against P. falciparum–pLDH (29).

Emergence of pfhrp2-negative parasites poses a major threat to malaria control programs because patients infected with these parasites are not given a correct diagnosis and treatment. Because of broad use of HRP2-based RDTs, particularly in Africa, the magnitude of selection pressure and potential scope of the problem are large. Confirming pfhrp2/3 deletions as the cause of false-negative RDT results requires multiple PCRs performed by experienced technicians. Guidance on investigating pfhrp2 deletions and accurate reporting is available (21). In addition, WHO has recently released a standard survey tool to determine whether pfhrp2/3 gene deletions in P. falciparum isolated from patients with confirmed symptomatic malaria have reached a threshold triggering a change in diagnostic strategy (30).

In conclusion, we confirmed that frequently reported false-negative results for P. falciparum in specimens tested by using HRP2-based RDTs in Eritrea were caused by high proportions of parasites with deletions of pfhrp2/pfhrp3 genes. It is clear that HRP2-based RDTs are no longer appropriate diagnostic tools for malaria case management in this country. RDTs detecting other parasite antigens, such as P. falciparum–pLDH, have been implemented. Our results show the need to seriously investigate reports of false-negative RDT results and conduct surveys to determine the prevalence of pfhrp2/3 deletions in neighboring regions. International technical guidance is also needed to assist countries in planning pfhrp2/3 surveillance activities and laboratory investigations and adapting procurement and case management strategies when pfhrp2/3 gene deletions are confirmed.

Dr. Berhane is director of the Communicable Diseases Control Division, Ministry of Health, Asmara, Eritrea. His primary research interest is control of communicable diseases, including malaria.

We thank all study subjects for participating in the study.