Recent surveillance studies have shown that Enterobacter spp. are often the second or third most common Enterobacteriaceae species associated with carbapenemases (3,4). Typically, KPCs are common among Enterobacter spp. from the United States and South America (5). VIMs are often limited to Europe, NDMs to the Indian subcontinent, and OXA-48 to North Africa and the Middle East (5).

Comprehensive global data regarding the different Enterobacter species and molecular epidemiology are currently limited. We designed a study that used short-read whole-genome sequencing to describe the molecular characteristics and international distribution of Enterobacter spp. with different carbapenemases (n = 170) obtained from 2 global surveillance systems during 2008–2014.

We included 170 clinical, nonrepeat Enterobacter spp. collected from 2 global surveillance programs, namely the Merck Study for Monitoring Antimicrobial Resistance Trends (SMART) (2008–2014) and the AstraZeneca global surveillance program (2012–2014), presently known as the INFORM Global Surveillance Study of Antimicrobial Resistance (Technical Appendix 1 Table 1; Technical Appendix 2). The isolates initially underwent phenotypic identification and microdilution panel susceptibility testing, and all carbapenem-nonsusceptible isolates underwent molecular screening for blaKPC, blaVIM, blaNDM, blaOXA-48–like, blaIMP, and blaGES as described previously (6). We obtained a total of 142,226 Enterobacteriaceae from the period 2008–2014, and 6,457 (4.5%) were identified as Enterobacter spp.; 682 were nonsusceptible to 1 of the carbapenems, and 170/6,457 (2.6%) were positive for blaKPC, blaOXA-48–like, blaNDM, blaVIM, and blaIMP and thus included in our study.

We created a recombination-free, core single-nucleotide polymorphism (SNP)–based phylogenetic tree and identified SNPs by mapping the reads or aligning the genomes against E. xiangfangensis type strain LMG27195 (9) using the RedDog pipeline (https://github.com/katholt/RedDog). We removed recombination sites according to Gubbins (12) and removed prophages identified by PHAST (13). We included core SNPs and sites that were present in all genomes to create a maximum-likelihood tree using RAxML with the general time-reversible plus gamma substitution model (14). We visualized the tree by using iTOL version 3 (15).

To identify clades within certain sequence types (STs), we used a phylogeny-free population genetics approach of core SNPs, conducting hierarchal clustering analysis with the Bayesian Analysis of Population Structure program (16). We included all 1,048 available Enterobacter spp. genomes in the NCBI Reference Sequence Database (http://www.ncbi.nlm.nih.gov/refseq) as of June 20, 2017. An in silico MLST analysis identified 282 STs from 950 typeable genomes. We included a total of 201 genomes of STs 78, 90, 93, 105, 108, 114, and 171 for the clustering analysis (Technical Appendix 1 Table 3). For each E. hormaechei subspecies or E. xiangfangensis, the hierarchal Bayesian Analysis of Population Structure clustering analysis (16) was conducted with 3 nested levels with a priori upper bound of the number of clusters between one fourth to one half of the total number of isolates. We defined clades by using the second level of clustering.

We identified 10 isolates as E. aerogenes. These results are described in Technical Appendix 2.

E. xiangfangensis Identified as the Most Common Species 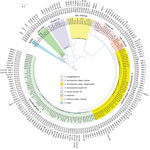 Figure 2. Phylogenetic tree of the different clades among 40 Enterobacter xiangfangensis ST14 isolates identified from Enterobacter spp. isolates collected in the Merck Study for Monitoring Antimicrobial Resistance Trends, 2008–2014, and the AstraZeneca...

ST114 (n = 19) from E. xiangfangensis was the most common ST and divided into 4 clades. Isolates representing 3 of the clades (ST114A, ST114B, and ST114C) were from this study, and isolates representing clade ST114D were from a different study (9; Figure 2; Technical Appendix 2 Table 2). ST114 had a global distribution (Greece, Italy, Kuwait, Morocco, Romania, Serbia, Tunisia, and the United States) and was associated with different carbapenemases (VIM-1, VIM-4+OXA-48, NDM-1, KPC-2, and OXA-48) (Technical Appendix 2 Table 2). The largest clade (ST114A [n = 13]) was present in Serbia, Romania (with blaNDM-1), Tunisia, Morocco, and Kuwait (with blaOXA-48) (Technical Appendix 2 Table 2). Clade ST114B (n = 4) with blaVIM-1 was obtained from Greece and Italy, and clade ST114C (n = 2; 1 with blaVIM-1 and 1 with blaKPC-2) was found in the United States. ST114 is a common global human Enterobacter clone (18) and is also present in companion animals (19). This international clone is associated with various antimicrobial resistance determinants (20) and was responsible for a prolonged nosocomial outbreak involving KPC-3 in the United States (21). 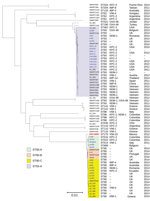 ST90 (n = 10), from E. hormaechei subsp. steigerwaltii, and ST78 (n = 10), from E. cloacae cluster III, were the next most common STs in our collection. ST90 was divided into 3 clades; isolates from 2 of the clades (ST90B and ST90C) were from this collection, whereas isolates representing clade ST90A were from a different study (22; Figure 3; Technical Appendix 2 Table 2). ST90C with blaVIM-1 (n = 7) was from Greece, whereas clade ST90B showed an international distribution (ST90C with IMP-4 from Australia, KPC-2 from Canada, and NDM-1 from Romania).

The minor STs, including ST105 and ST108 (both with 6 isolates), were distinguished on the basis of their molecular epidemiology. ST105 from E. xiangfangensis belonged to a single clade and was only present in Croatia, where it contained blaVIM-1. All the E. hormaechei subsp. oharae isolates belonged to ST108, which was divided into 5 clades; isolates from 2 of the clades (ST108C and ST108D) were from this collection, whereas isolates representing the other clades were from different studies (23; Figure 4). Clade 108C (n = 4) was present in Spain with blaVIM-1 (n = 2) and China with blaIMP-1 (n = 2), and ST108D (n = 2) was found in Australia (with blaIMP-4) and Israel (with blaOXA-48).

For each of the 170 isolates, we tabulated the study number, GenBank accession number, species, date, country of isolation, ST, and clade. The β-lactamases, antimicrobial resistance determinants, plasmid replicon types, and plasmid STs are shown in Technical Appendix 1 Table 1 and Technical Appendix 2.

The blaKPC were mainly associated with the Tn4401b isoform (including the 4 novel structures), whereas blaOXA-48 was always associated with Tn1999 (including the 4 novel structures). Isolates with NDM contained ISAba125 upstream and bleMBL downstream of the blaNDM, and the blaVIM and blaIMP were situated within diverse class I integrons from various countries (Technical Appendix 2 Table 2).

Integrons Harboring blaVIM-1 Circulating Locally within the Same or between Different STs in Spain, Greece, and Italy

The most common carbapenemase among Enterobacter spp. from our study was VIM, followed by NDM, KPC, OXA-48, and IMP. Carbapenemase-producing Enterobacter spp. was dominated by 2 global species, namely E. xiangfangensis with 1 major clone (ST114) and E. hormaechei subsp. steigerwaltii with 2 major clones (ST90 and ST93). ST114 and ST90 were divided into different clades; some of the clades (e.g., 90C and 114B) were located in certain geographic regions affiliated with specific carbapenemases, whereas other clades (114A and 90B) were distributed globally in association with different types of carbapenemases.

The first study that described the global distribution of E. cloacae clones was undertaken by Izedebski et al (18), who performed MLST on 173 cephalosporin-resistant E. cloacae isolates obtained from Israel and several countries in Europe. MLST identified 88 STs among this collection, with ST78, ST114, ST108, and ST66 being the most common and widespread clones. A ST78 isolate was positive for KPC-2, and a ST114 isolate was positive for VIM-1 (18). With the exception of this study from Izedebski et al (18), limited information is available regarding the global distribution of ST93, ST90, ST78, ST105, and ST108 and consists mainly of sporadic reports (29–32).

Chavda et al. (9) characterized 74 carbapenem-resistant Enterobacter spp. (more than half of the isolates were obtained from New Jersey, USA), and most possessed different blaKPCs, whereas only 2 isolates had blaNDM-1. E. xiangfangensis also dominated, and ST171 was the most common clone. ST171 was rare in our collection (n = 4) but did show genetic and geographic diversity. ST171 was divided into 3 clades: 171A, 171B, and 171C (Technical Appendix 2 Figure). Clades 171B and 171C are associated with blaKPC from the United States and United Kingdom (Technical Appendix 2 Figure). Clade 171B (n = 2) contained blaKPC-2 from Colombia and blaNDM-1 from Guatemala. Clade 171A (n = 1) with blaNDM-1 was obtained from South Africa, and clade 171C with blaKPC-3 was obtained from the United States.

These associations demonstrate that certain mobile genetic elements with carbapenemase genes have the ability to move between clones and clades of Enterobacter spp. on a global scale. This ability is highlighted by ST78 with blaVIM-1 within different integrons (In237, In916, and In624) that circulate between various countries (Greece, Italy, and Spain). As some STs are introduced into different countries, they apparently acquire the local genetic elements prevalent in that country. Of special concern is the description of a common NDM genetic structure, named NDM-GE-U.S., previously found on pNDM-U.S. and first described in a K. pneumoniae from the United States (24). NDM-GE-U.S. was present in different species, clones, and clades obtained from 6 countries spanning 4 continents. Sequence similarity analysis suggested that it was present on different types of plasmids (pK518_NDM1 and pNDM-HN380) among Enterobacter spp. with blaNDM.

Our results support the current understanding that the carbapenem resistance pandemic is the consequence of circulating clones and the spread of mobile genetic elements. We found that certain clones and clades (ST78, ST90C, ST96, ST114A, ST114C, and ST141) containing particular genetic structures (In87, In624, In916, In237, NDM-GE01, NDM-GE02, and NDM-GE03) and carbapenemases were circulating locally within the same or between different institutions in certain countries (Greece, Guatemala, Italy, Spain, Serbia, and Vietnam). Other global clones and clades (ST90B, ST93, and ST108) contained various genetic structures and carbapenemases.

A limitation of this study was that plasmids harboring carbapenemases were not reconstructed because of the limitations of short-read sequencing (33). The characterization of plasmids is vital to fully comprehend the molecular epidemiology of Enterobacter spp. with carbapenemases, and a follow-up study using long-read sequencing is currently under way. In the meantime, our study highlights the importance of surveillance programs using whole-genome sequencing to provide insight into the characteristics and global distribution of clones and clades as well as their association with mobile genetic elements surrounding the different carbapenemase genes.

Dr. Peirano is a research associate at Calgary Laboratory Services and the University of Calgary. Her main research interests revolve around the detection and molecular epidemiology of antimicrobial drug resistance mechanisms among gram-negative bacteria.

1These co-authors contributed equally to this article.