Hemotropic mycoplasmas (or hemoplasmas; size <1 μm) are unculturable, cell wall–deficient, gram-negative bacteria that parasitize on the surface of the erythrocytes of numerous domestic and wild animals, such as cats, dogs, rodents, swine, cattle, sheep, bears, and bats (1–4). These pathogens can cause pyrexia, hemolytic anemia, and icterus (1,5). There have been few studies on molecular characterization of hemoplasmas to confirm infections in humans (6–11), possibly because hemoplasmas are unculturable and are liable to be overlooked by physicians (11,12). Steer et al. found that the putative species Mycoplasma species Candidatus Mycoplasma haemohominis can infect humans and cause hemolytic anemia and pyrexia (9). However, only a partial sequence of Candidatus M. haemohominis (GenBank accession no. GU562825) could be confirmed (9). Moreover, clinical manifestations of Candidatus M. haemohominis infections in humans have not been well characterized.

We identified and characterized Candidatus M. haemohominis infections in a patient with pyrexia of unknown origin. The patient had various life-threatening symptoms that were not limited to hemolytic anemia and was infected with this bacterium after an accidental needlestick injury. We also analyzed the genome of Candidatus M. haemohominis isolated from specimens obtained from the patient. This study was approved by the Institutional Review Board of Showa University (Tokyo, Japan) and the National Institute of Infectious Diseases (Tokyo). We obtained informed consent from the patient.

The case-patient was a 42-year-old man (physician) who had no unusual medical history and no recent overseas travel history. The patient was admitted to Showa University School of Medicine Hospital (Tokyo, Japan) because of pyrexia, anemia, and liver dysfunction. One month before admission, he had accidentally pricked his finger when performing needle biopsy of the liver for 1 inpatient, who was admitted to this hospital because of cryptogenic liver injury and anemia after traveling overseas. Two weeks after the needlestick injury, the case-patient had pyrexia and whole-body erythema with pruritus (Figure 1). His rash disappeared after 3 days. However, he was admitted to the hospital because lymphadenopathy, hepatosplenomegaly, and pyrexia developed.

Figure 2. Clinical course for a 42-year-old man infected with Candidatus Mycoplasma haemohominis, Japan. *For ALT, AST, and LDH, left y-axis is for AST and ALT and right y-axis is for LDH. ALT,...

Test results were negative for hepatitis A, B, C, and E viruses; measles virus; rubella virus; parvovirus; and HIV. Results of antinuclear antibody (titer 1:80) and smooth muscle antibody (titer 1:40) tests were positive, but test results for antimitochondrial M2 antibody, mitochondrial antibody, double-stranded DNA antibody, and lupus anticoagulant were negative. Epstein-Barr virus (EBV) DNA load determined by PCR was 3.0 × 102 copies/mL. However, Southern blot hybridization did not detect clonality of EBV-infected cells. Levels of herpes simplex virus, human herpesvirus 6 and 8, varicella zoster virus, and cytomegalovirus were below reference values, as determined by PCR. The serum IgG level was 3,967 mg/dL (reference range 800–1,750 mg/dL). However, the result of a serum-free light chain test was within the reference limit.

Our initial diagnosis was hemophagocytic syndrome (HPS) related to undetermined disease, and the patient was given steroid pulse therapy (1,000 mg) on day 1. Because his symptoms persisted, he was given etoposide (100 mg/m2), cyclosporine (5 mg/kg), and dexamethasone (20 mg) on day 7. After this treatment was started, whole-genome sequencing of a peripheral blood sample detected a novel hemotropic Mycoplasma sp.

Figure 3. Distribution of Candidatus Mycoplasma haemohominis in a 42-year-old man, Japan. A) Peripheral blood smear showing coccoid forms. Small basophilic bodies are present on the surface of and outside erythrocytes (arrows). Arrowhead...

On day 13, the case-patient received a diagnosis of Candidatus M. haemohominis infection–associated HPS and was given levofloxacin. Hypoglycemia improved after administration of levofloxacin. However, pyrexia and anemia developed, and coccoid forms on erythrocytes in peripheral blood and bone marrow were again observed on day 37. On day 46, he was given moxifloxacin and minocycline because of suspected bacterial resistance to levofloxacin. After this treatment was initiated, his symptoms, such as pyrexia, anemia, and hypoglycemia, promptly resolved, and the patient was discharged on day 61. One year after discontinuation of treatment, the patient remained well, and no Candidatus M. haemohominis DNA was detected in his serum.

We obtained a draft genome sequence of Candidatus M. haemohominis by de novo assembly using metagenomic DNA-Seq short reads. First, we excluded human genomic DNA sequences (≈58.3%) by using read-mapping analysis, followed by de novo assembly with the remaining short reads. The total number of contigs was 703, and total length was ≈1.42 Mb, suggesting that whole contigs included bacterial and human-related DNA sequences. Therefore, to extract the bacterial sequences, we considered read depth and coverage, % GC of each contig, and a blastn search (https://blast.ncbi.nlm.nih.gov). A total of 23 contigs showed a marked read depth coverage (average × 5,500) and 30% GC content, although blastn search analysis showed that 4 contigs were assigned to the Mycoplasma genome and 19 contigs were assigned to unknown sequences.

We fixed tissue samples with 2.5% glutaraldehyde and 2% paraformaldehyde in 0.1 mol/L phosphate buffer (pH 7.4) for 2 h at room temperature, postfixed these samples in 1% osmium tetroxide, and embedded them in Epon resin. We stained ultrathin sections with uranyl acetate and lead citrate and observed them under a transmission electron microscope (HT7700; Hitachi) at 80 kV.

We used 16S and 23S rRNA genes for in situ hybridization analysis. We amplified a target fragment by using PCR with digoxigenin-11-dUTP and MHaemohominis1F (5′-AATTAACGCTGATGGCATGC-3′) and MHaemohominis600R (5′- TCCTACCGTATTCTAGACGGAC-3′) primers. We purified a PCR amplicon by using a PCR Purification Kit (QIAGEN) and denatured it by heat shock before hybridization. We treated deparaffinized slides with 0.3% H2O2/methanol for 30 min and 0.2 mol/L HCl for 20 min, then incubated slides with proteinase K (3–10 μg/mL) for 30 min at 37°C. After prehybridization, we hybridized slides with 2 pmol/L of denatured probe per slide in hybridization buffer (20% formamide; 5× saline–sodium citrate [SSC], 5 × Denhardt solution; 50 mmol/L HEPES buffer [pH 7.0], and 40 µg/mL salmon sperm DNA) overnight at 42°C. We washed the slides twice with 2× SSC at 50°C for 15 min and twice with 0.2× SSC at 50°C for 15 min, added anti-digoxigenin monoclonal antibody (Sigma, https://www.sigmaaldrich.com), and incubated the slides for 45 min. We than amplified signals by using a GenPoint Kit (Dako Agilent, https://www.agilent.com) and detected these signals by using 3,3′-diaminobenzidine as a chromogen.

We used a DNA fragment of the 16S rRNA gene of Candidatus M. haemohominis in a Taqman real-time PCR (16). We then performed PCR amplification in 25-μL reaction mixtures containing QuantiTect Probe PCR Master Mixture (QIAGEN), 0.4 μmol/L of each primer, 0.2 μmol/L of TaqMan probe, and 100 ng of isolated DNA. PCR conditions were 95°C for 15 min, followed by 45 cycles of 94°C for 15 s and 60°C for 1 min in a Mx3005P Apparatus (Dako Agilent). 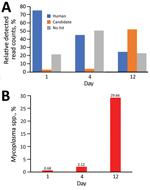 Figure 4. Prediction of presence of Candidatus Mycoplasma haemohominis in serum samples of a 42-year-old man, Japan. A) Relative percentage of candidate bacteria. B) Percentage of Mycoplasma spp. detected. 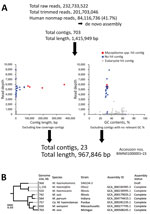 Metagenomic deep RNA sequence analysis strongly suggested that rather than other pathogens or virus infections, the Mycoplasma spp. could be associated with signs and symptoms of the case-patient. RNA-Seq short reads related to the Mycoplasma spp. were increasingly detected in the serum of the case-patient (Figure 4). A total of 41.7% of human-unmapped reads were extracted and then subjected to de novo assembly to identify the mycoplasma draft genome (23 contigs, 967,846 bp) (Figure 5, panel A). The draft genome sequence identified a potential pathogen that could be Candidatus M. haemohominis on the basis of 16S rRNA sequence homology. Also, this pathogen showed similarity with closely related species, such as M. haemofelis and M. haemocanis (Figure 5, panel B).

Figure 6. Morphologic features of Candidatus Mycoplasma haemohominis isolated from a serum sample of a 42-year-old man, Japan. A) Spheres are bacterial particles with a diameter of 300–600 nm. Negative stained; scale bar indicates...

Figure 8. Detection of a gyrA mutation in the QFDR of Candidatus Mycoplasma haemohominis genome isolated from in a 42-year-old man, Japan, who was given levofloxacin. Read-mapping analysis identified a nonsynonymous amino acid...

We determined the level of Candidatus M. haemohominis DNA in serum by using real-time PCR (Figure 7). A high copy number for Candidatus M. haemohominis DNA was detected 18 days after the accidental needlestick injury. The bacterial load in serum decreased below the detection limit (<10 copies/reaction) 14 days after the patient was given levofloxacin, but again increased. Metagenomic analysis also indicated a high detection rate for Mycoplasma spp. reads in serum before and after treatment with levofloxacin. Read-mapping analysis showed that only 2-nt mutations were identified in samples after treatment with levofloxacin. Moreover, 1 of 2 mutations was a nonsynonymous mutation in the quinolone resistance–determining regions (QRDR) of the DNA gyrase subunit A GyrA (i.e., Gly95Cys, corresponding to aa 81 by numbering for Escherichia coli) (Figure 8). The bacterial load promptly decreased after combination therapy with moxifloxacin and minomycin. We also identified Candidatus M. haemohominis by using real-time PCR and in situ hybridization with samples from a liver biopsy of the patient.

We suggest that our results will help in diagnoses of Candidatus M. haemohominis infections, enabling early therapeutic intervention that might cure patients with these infections. Candidatus M. haemohominis patients are highly susceptible to misdiagnosis with other diseases, such as collagen diseases (e.g., systemic lupus erythematosus) and virus infections (e.g., severe fever with thrombocytopenia syndrome and EBV-associated HPS), because of the wide range of complications.

Laboratory tests for our case-patient showed low blood glucose levels (<5 mg/dL, reference range 61–139 mg/dL) but related no clinical signs. Hemoplasma-associated hypoglycemia in the absence of any associated clinical signs has been described in various animal species (22). This phenomenon is proportional to the severity of bacteremia and depends on the hemoplasma species (22). Because it is possible that glucose would be useful only for carbohydrate metabolism in the hemoplasma species (23), this finding might cause attachment in the epierythrocytic environment, which is rich in glucose, and result in alternative energy source pathways that become redundant.

We observed moderate to severe hemorrhagic episodes for this case-patient. Although the pathogenesis of bleeding in patients infected with Candidatus M. haemohominis is not completely understood, a dramatic decrease in coagulation factor VIII and VWF activities was observed in this case-patient, which is similar to that observed in patients with acquired von Willebrand syndrome (24,25). Given the hypergammaglobulinemia and increased plasma cell levels observed in this case-patient and other patients. the possible mechanisms of infection are adsorption of vWF onto plasma cells or activated platelets apart from the presence of vWF-specific antibodies and inhibitors (24,25).

Dr Hattori is a research scientist at Showa University School of Medicine, Tokyo, Japan. His primary research interest is hematology.

We thank the case-patient for participating in this study, the clinical staff who supported and cared for this patient, and Yuko Sato and Michiyo Kataoka for providing technical assistance with immunohistochemical analysis, in situ hybridization, and electron microscopy.

This study was supported by the Research Program on Emerging and Re-emerging Infectious Diseases from the Japan Agency for Medical Research and Development (grants JP19fk0108048, JP19fk0108103, and JP19fk0108104).