Transmission of Multidrug-Resistant Salmonella enterica Subspecies enterica 4,[5],12:i:- Sequence Type 34 between Europe and the United States

Multidrug-resistant Salmonella enterica subspecies enterica 4,[5],12:i:- sequence type 34 represents a worldwide public health risk. To determine its origin in the United States, we reconstructed a time-scaled phylogeny with a discrete trait geospatial model. The clone in the United States was introduced from Europe on multiple occasions in the early 2000s.

Since the late 1990s, reports of an emerging multidrug-resistant Salmonella enterica subspecies enterica serotype 4,[5],12:i:- strain have been published in Europe (1). This strain is a monophasic variant of Salmonella Typhimurium, predominantly resistant to ampicillin, streptomycin, sulfonamides, and tetracycline (ASSuT). Its rapid increase in North America after 1998 has also been described (2). However, precise knowledge of the time of introduction and the initial influx of clinical cases caused by this serotype in the United States is not available because of inconsistent reporting before 2004 (3).

Previously, on the basis of high genetic similarity between Salmonella 4,[5],12:i:- sequence type (ST) 34 isolates from the United States and Europe and Salmonella Typhimurium strains from Europe, we suggested a European origin for the Salmonella 4,[5],12:i:- ST34 clade (4). With this study, we aimed to reconstruct a time-scaled phylogeny of the emerging ST34 clade by using a Bayesian modeling approach to determine its origin in United States. 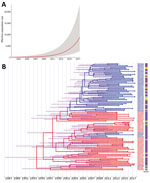 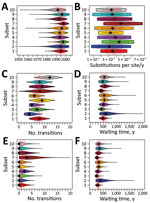 Figure 2. Summary of posterior estimates of all 10 subsets of sequences of Salmonella enterica subspecies enterica4,[5],12:i:- sequence type (ST) 34 collected from multiple sources in...

We used publicly available whole-genome sequences of 1,431 Salmonella 4,[5],12:i:- ST34 isolates from the United States and Europe from 2008–2017, including sequences from 690 isolates from Europe (mainly from the United Kingdom and Denmark) and 741 isolates from multiple US states (Appendix 1). We used BEAST version 1.8.4 (5) to estimate divergence times, mutation rates, and location trait transitions. We applied the modeling approach to 10 subsets of 112 sequences selected from the study population. These sequences represented 33% (474/1,431) of the study population and included 242 sequences from Europe (76% from humans, 8% from food products, 8% from livestock, and 8% from other sources) and 232 from the United States (62% from humans, 13% from food products, 21% from livestock, and 3% from other sources). Time-scaled phylogenies of each subset were reconstructed by using a general time-reversible nucleotide substitution model, an uncorrelated lognormal relaxed molecular clock, and an exponential growth coalescent model with asymmetric trait transitions (Figure 1; Appendix 2 Figures 1–10). All time-scaled phylogenies presented similar topology to a maximum-likelihood phylogeny constructed by using all 1,431 study isolates (based on visual inspection; Appendix 2 Figure 11). Overall, averaged estimates from all subsets were in agreement as follows (Figure 2): the evolutionary rate was 3.64 × 10−7 substitutions/site/year (95% highest posterior density [HPD] 2.65–4.64 × 10−7), which corresponds to an accumulation of »1–2 single-nucleotide polymorphisms/genome/year; the time to most recent common ancestor was 1994 (95% HPD 1988–2000); the number of collection location state transitions (Markov jumps) from Europe to the United States was 7.7 (95% HPD 5.9–9.3) and from the United States to Europe was 0.8 (95% HPD 0–2.2); and the waiting times (in years; Markov rewards) were 519.9 (95% HPD 393.1–667.8) in Europe and 318.6 (95% HPD 234.0–417.6) in the United States. The exponential growth rate of the population was estimated at 0.316/year (averaged across all subset means; Figure 1). In addition, the estimated (averaged) main introduction into the United States was 2004 (95% HPD 2000–2006; Appendix 2 Table 1). The occurrence of several additional smaller introductions was suggested by 48 sequences (6 from Europe and 42 from the United States). The 6 sequences from Europe were recovered from human sources; among sequences from the United States, 28 were from humans, 5 from food products, 6 from livestock, and 3 from other sources. Information on recent international travel was obtained for 22/28 of US isolates from humans, 2 of whom had traveled (1 to the Philippines and the other to France [S. Meyer et al., Minnesota Department of Health, pers. comm., 2019 Sep 23]).

Among the 1,431 Salmonella 4,[5],12:i:- ST34 sequences, 978 (68.34%) had genetic determinants contributing to the ASSuT profile, 108 (7.55%) conferred resistance to quinolones, and 82 (5.73%) conferred resistance to extended-spectrum cephalosporins. The probability of harboring most predominant acquired antimicrobial resistance genes (AARGs) conferring the resistance phenotypes described above was significantly higher for sequences of US isolates (odds ratio 2.37–26.05; Table). Yet associations between the collection location and the presence of blaCTX-M or qnrS1 genes were not significant (Table). In addition, AARGs conferring resistance to colistin (mcr-1/mcr-3/mcr-5; Appendix 1) were detected in isolates from Europe only (n = 5).

Salmonella 4,[5],12:i:- ST34 was introduced into the United States from Europe on multiple occasions since the beginning of the 21st century. The main introduction occurred in 2004; additional independent introductions resulted in small clades for which the predominant sources were human travelers and imported food products. Human travelers (6) and imported food products (7) have been described as potential vehicles for introduction of salmonellae.

The date of introduction of the main clade into the United States is later than the first peer-reviewed report of a Salmonella 4,[5],12:i:- infection in the country in 1998 (2). However, given the antimicrobial susceptibility profile of isolates from that report (mostly not ASSuT) (2), they most likely belonged to the nonemerging ST19 clade, which was described elsewhere (4). In addition, the incidence of Salmonella 4,[5],12:i:- in humans increased only modestly (9.5%) during 2006–2011 but increased dramatically (78.3%) during 2011–2016 (8). A similar increase in detection after 2011 was described for clinical cases in swine from the midwestern United States (9). The difference between the date of main introduction into the United States found in this study and the later sharp increase in its prevalence in animals and humans may in part result from changes in reporting practices and increasing awareness (8). However, the increase since 2011 can be the result of rapid propagation of the ST34 population, possibly associated with swine (4). Moreover, White et al. (10) recently reported that according to the National Antibiotic Resistance Monitoring System, the percentage of ASSuT-resistant Salmonella 4,[5],12:i:- from humans increased from 17% in 2009 to 59.1% in 2015 (out of all Salmonella 4,[5],12:i:- clinical isolates from humans). This increase probably resulted to a large extent from ST34 strains, in which this phenotype is predominant. The estimated exponential yearly growth rate determined in our model (0.316/year), which corresponds to a population doubling time of 2.2 years, is in agreement with this dramatic increase of the ST34 population.

Dr. Elnekave is a veterinarian and epidemiologist who has been working as a postdoctoral fellow in the Veterinary Population Medicine Department, University of Minnesota, and is a faculty member in the Koret School of Veterinary Medicine at the Robert H. Smith Faculty of Agricultural, Food and Environmental Sciences at the Hebrew University of Jerusalem, Israel. His primary research interest is the epidemiology of bacterial foodborne pathogens. He uses genetic tools and Bayesian models to study pathogen emergence, evolution, and antimicrobial resistance.

We thank staff members from the Minnesota Department of Health Foodborne, Waterborne, Vectorborne, and Zoonotic Diseases Section for providing the travel history records and for their advice on this work.

This work was supported by the Global Food Venture-MnDRIVE Initiative, the National Institute of Food and Agriculture (Animal Health Formula Fund project MIN-62-091) of the US Department of Agriculture, the Rapid Agricultural Response Fund, and the Swine Disease Eradication Center at the University of Minnesota. In addition, the United States-Israel Binational Agricultural Research and Development Fund awarded a Vaadia-BARD postdoctoral fellowship (no. FI-565-17) to E.E. A.E.M. is a Food Standards Agency research Fellow and is supported by the Biotechnology and Biological Sciences Research Council Institute Strategic Programme Microbes in the Food Chain BB/R012504/1 and its constituent project BBS/E/F/000PR10348 (Theme 1, Epidemiology and Evolution of Pathogens in the Food Chain). The Ramón y Cajal postdoctoral contract from the Spanish Ministry of Economy, Industry and Competitiveness (MINECO) (RYC-2016-20422) was awarded to J.A.

Page created: September 30, 2020
Page updated: November 19, 2020
Page reviewed: November 19, 2020
The conclusions, findings, and opinions expressed by authors contributing to this journal do not necessarily reflect the official position of the U.S. Department of Health and Human Services, the Public Health Service, the Centers for Disease Control and Prevention, or the authors' affiliated institutions. Use of trade names is for identification only and does not imply endorsement by any of the groups named above.

Transmission of Multidrug-Resistant Salmonella enterica Subspecies enterica 4,[5],12:i:- Sequence Type 34 between Europe and the United States