We describe a case of microsporidial myositis in a healthy man from Thailand. The small subunit rRNA sequence of this microsporidium is novel and has a close phylogenetic relationship with Endoreticulatus, a genus of lepidopteran microsporidia. Myositis could be caused by more genera of microsporidia than previously known.

Microsporidia are obligate intracellular eukaryotes of broad host range (1). At least 15 species have been implicated in human infections. Although few microsporidiosis cases have been reported, they have emerged as opportunistic infections in patients with HIV infection (1). In addition, microsporidiosis has increasingly been diagnosed in other immunocompromised patients, including those who have received an organ transplant, and in immunocompetent persons (1). Various clinical manifestations, ranging from localized (diarrhea, cholangitis, sinusitis, keratitis) to disseminated (myositis, osteomyelitis, encephalitis) infection have been observed, depending on the causative agent and host immune status (1). We report microsporidial myositis caused by a suspected new species of Microsporidium in an otherwise healthy man.

A 43-year-old man (a welder living in Lopburi Province, central Thailand) sought treatment at King Chulalongkorn Memorial Hospital, Bangkok, on November 30, 2010. He had experienced difficulty in swallowing for 2 weeks. Fifteen months before hospital admission, he experienced a low-grade fever and generalized muscle pain, especially in his lower back and both thighs. Despite several courses of medication, hospital, his condition had not improved.

Ten months before admission, weakness of lower and upper limbs developed in his proximal muscle, primarily on the left side. Two months before admission, his entire left leg was swollen, and he was confined to bed. During this illness, he had lost ≈29 pounds. He reported no travel abroad and had not taken any herbal medications. He did not smoke, drank alcohol occasionally, and did not use illicit drugs. He had no history of recurring infections during childhood and early adulthood.

A biopsy of left deltoid and both vastus lateralis muscles showed necrotizing granulomatous inflammation without any organisms by Gram, acid-fast bacilli, Wright, and Gomori methenamine silver staining. Bone marrow biopsy showed normal cellularity with increased plasma cells and histiocytes and focal aggregation of microsporidial spores with characteristic belt-like stripe (Figure 1). A 24-hour urine sample (centrifuged) yielded characteristic microsporidial spores on modified trichrome stain, 1.0–1.5 μm × 1.2–2.2 μm, similar to those observed in the bone marrow sample. Because of an overgrowth of Candida yeast, we did not isolate the organism from the urine sample. 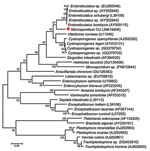 Figure 2. Phylogenetic tree inferred from the small subunit rRNA sequences of microsporidia in this study and those in the GenBank database by using the maximum-likelihood method as implemented in MEGA5.05 software (<>

Analysis of the small subunit rRNA gene spanning 797 bp of DNA from microsporidial spores isolated from this patient showed a novel sequence (GenBank accession no. JN619406). Phylogenetic reconstruction using the maximum-likelihood method placed the patient’s Microsporidium sp. within the cluster of the genera Endoreticulatus, Cystosporogene, and Vittaforma (Figure 2) (2). This species has a close phylogenetic relationship with Endoreticulatus spp. Notably, the guanine-cytosine content of the SSU rRNA locus of microsporidia within the genus Endoreticulatus varied from 51.4% to 51.8%, with the base composition distance 0.001–0.029. However, the small subunit rRNA sequence of microsporidium from our patient (GenBank accession no. JN619406) contained 52.4% guanine-cytosine, and the base composition distance differed from Endoreticulatus spp. from 0.094–0.170, making it unlikely that the patient was infected with an organism from this genus.

The patient was treated with albendazole (800 mg/d continuously). Fever subsided after 1 week of treatment, and weakness gradually improved. He was discharged on a regimen of oral albendazole (800 mg/1×/d) but died unexpectedly from aspiration pneumonia 1 month later. An autopsy could not be performed.

Microsporidia can cause either localized or disseminated infection in humans. The true prevalence of microsporidiosis in humans may be underestimated because of asymptomatic infection in most healthy persons, clinician unawareness, and difficulties in diagnosis. Myositis caused by microsporidia is rare; only 12 patients (including our patient) have been reported in the literature (Table A1; 3–12). Among these 12 patients, 9 were male and 3 were female (age range 4 months to 67 years). Patients were from all continents except Europe: United States (7 patients), Australia (2), Haiti (1), the Gambia (1), and Thailand (1). The patient described here is the first report from Asia. Trachipleistophora sp. (6 patients) is the most common causative agent of myositis, followed by Brachiola sp. (3 patients), Pleistophora sp., Tubulinosema acridophagus sp., and Microsporidium spp. (1 patient each). However, the species of microsporidia originally described in 2 reports (5,6) was changed from Pleistophora sp. to Trachipleistophora sp. upon reexamination of the ultrastructures by electron microscopy.

Although ultrastructural study of the microsporidium from this patient has not been performed, the SSU rRNA sequence clearly supports the finding that it is a novel species, closely related to Endoreticulatus spp. (Figure 2). Most patients in previous reports had disseminated infection or isolated myositis. The patient described here had pulmonary hypertension, likely caused by microsporidia; several reports have shown that these organisms can cause pulmonary infection (13).

The routes of microsporidial infection are still uncertain, but the species that can infect humans have been identified in water sources and in farm, domestic, and wild animals. Furthermore, Trachipleistophora spp. have been found only in human hosts. However, on the basis of the feature of bisporous sporophorous vesicles, T. anthropophthera was proposed to be related to Telomyxa spp., which are parasites of mayflies. T. anthropophthera was reported to be the causative agent of keratitis in an HIV-infected patient from Thailand (14). Brachiola spp. (formerly Nosema spp.) are known to be pathogens of several kinds of insects, including mosquitoes (10). Pleistophora spp. have been found in fish and reptiles, but P. ronneafiei has never been identified in any hosts other than humans. Microsporidium spp. that can infect humans are M. ceylonensis and M. africanum. Both species were reported from the patients with keratitis from Sri Lanka and Africa, respectively, although their natural hosts remain unknown.

To our knowledge, the microsporidium possessing a novel SSU rRNA sequence closely related to Endoreticulatus spp. has never been identified in patients with myositis. Notably, certain lepidopteran microsporidia can produce various responses in nontarget hosts, from refractory to severe infections. Although we have no evidence regarding the route or source of this patient’s infection, the close phylogenetic relationship of this microsporidium and lepidopteran microsporidia suggests that these non–blood-sucking insects could be natural hosts. Water or foods contaminated with lepidopteran insects could not be excluded as the source of infection. Likewise, recent reports that Trachipleistophora extenrec can cause myositis in anteaters (15) and that Tubulinosema sp. can cause myositis in an immunosuppressed patient (12) further support the role of insect microsporidia as human pathogens.

Page created: January 09, 2012
Page updated: January 10, 2012
Page reviewed: January 10, 2012
The conclusions, findings, and opinions expressed by authors contributing to this journal do not necessarily reflect the official position of the U.S. Department of Health and Human Services, the Public Health Service, the Centers for Disease Control and Prevention, or the authors' affiliated institutions. Use of trade names is for identification only and does not imply endorsement by any of the groups named above.