Cryptosporidium ubiquitum is an emerging zoonotic pathogen. In the past, it was not possible to identify an association between cases of human and animal infection. We conducted a genomic survey of the species, developed a subtyping tool targeting the 60-kDa glycoprotein (gp60) gene, and identified 6 subtype families (XIIa–XIIf) of C. ubiquitum. Host adaptation was apparent at the gp60 locus; subtype XIIa was found in ruminants worldwide, subtype families XIIb–XIId were found in rodents in the United States, and XIIe and XIIf were found in rodents in the Slovak Republic. Humans in the United States were infected with isolates of subtypes XIIb–XIId, whereas those in other areas were infected primarily with subtype XIIa isolates. In addition, subtype families XIIb and XIId were detected in drinking source water in the United States. Contact with C. ubiquitum–infected sheep and drinking water contaminated by infected wildlife could be sources of human infections.

Cryptosporidium infection is a leading cause of diarrhea in humans (1). Five Cryptosporidium species—C. hominis, C. parvum, C. meleagridis, C. felis, and C. canis—are responsible for most cases of cryptosporidiosis in humans. Among them, C. hominis and C. parvum are the most common etiologic agents, and the latter is responsible for most zoonotic infections (2). In recent years, C. ubiquitum, previously known as the cervine genotype, has been emerging as another major zoonotic species that infects persons. It has been found in humans worldwide, primarily in industrialized nations (3–11). In the United Kingdom, more human cases of cryptosporidiosis have been attributed to C. ubiquitum than to C. canis (9).

Thus far, showing an association between human and animal cases of C. ubiquitum infection has not been possible because of the lack of suitable genetic markers for subtyping. For C. parvum, C. hominis, and some genetically related species, the most commonly used marker for subtyping is the 60-kDa glycoprotein gene (gp60, also called gp40/15). Sequence analysis of the gp60 gene has been used in studies of the genetic diversity, host adaptation, infection sources, and transmission dynamics of these Cryptosporidium spp. (2). However, it has been suggested that a single locus, such as gp60, is not a reliable marker of C. parvum and C. hominis population structure because genetic recombination may occur (23).

Because C. ubiquitum is genetically distant from C. hominis and C. parvum, its homologue of the gp60 gene has thus far not been identified (24). In this study, we identified the gp60 gene of C. ubiquitum by whole-genome sequencing and used it to develop a subtyping technique to characterize specimens from humans, various animals, and drinking source water.

To identify a subtyping marker for C. ubiquitum, we sequenced the genome of an isolate from a specimen (33496) from a Verreaux’s sifaka by 454 technology using a GS FLX+ System (454 Life Sciences, Branford, CT, USA). This specimen was selected for whole-genome sequencing because of the high number of oocysts present, the availability of ample fecal materials for isolation of oocysts by sucrose and cesium chloride gradient flotation and immunomagnetic separation, and minor contamination from nontarget organisms in extracted DNA. Of the 3,030 assembled contigs of 11.4 MB nucleotides generated from 1,069,468 sequence reads, 1contig (no. 0067), consisting of 45,014 bp, had a high sequence similarity to the 5′ and 3′ ends of the gp60 gene and the flanking intergenic regions. Alignment of the contig 0067 sequence with the nucleotide sequences of the C. parvum gp60 gene (AF203016 and AY048665) led to the identification of sequences conserved between C. ubiquitum and C. parvum, which were used to design a nested PCR that amplified the entire coding region of the gp60 gene, except for the 54 nt at the 3′ end. The sequences of primers used in primary and secondary PCR were 5′-TTTACCCACACATCTGTAGCGTCG-3′ (Ubi-18S-F1) and 5′-ACGGACGGAATGATGTATCTGA-3′ (Ubi-18S-R1), and 5′-ATAGGTGATAATTAGTCAGTCTTTAAT-3′ (Ubi-18S-F2) and 5′-TCCAAAAGCGGCTGAGTCAGCATC-3′ (Ubi-18S-R2), which amplified an expected PCR product of 1,044 and 948 bp, respectively.

Products of the secondary gp60 PCR were sequenced in both directions on an ABI 3130 Genetic Analyzer (Applied Biosystems). The sequences were assembled by using ChromasPro 1.32 (www.technelysium.com.au/ChromasPro.html), edited by using BioEdit 7.04 (www.mbio.ncsu.edu/BioEdit/bioedit.html), and aligned by using ClustalX 2.1 (www.clustal.org/). To assess the genetic relatedness of various subtype families of C. ubiquitum, we constructed a neighbor-joining tree by using MEGA 5.05 (www.megasoftware.net/). The reliability of cluster formation was evaluated by the bootstrap method with 1,000 replicates. To assess potential recombination among various subtype families, we used DnaSP 5.10 (www.ub.es/dnasp/) to calculate recombination rates on the basis of segregating sites (excluding insertions and deletions). Unique nucleotide sequences derived from this work were deposited in GenBank under accession nos. JX412915–JX412926 and KC204979–KC204985.

We compared the difference in the distribution of C. ubiquitum XIIa and non-XIIa subtype families between rodents and ruminants and between humans in the United States and the United Kingdom by using a χ2 test implemented in SPSS 20.0 for Windows software (IBM Corp., Armonk, NY, USA). The difference was considered significant when the p value obtained was <0.05.

Features of the gp60 Gene of C. ubiquitum

Of the 188 DNA preparations of C. ubiquitum, 149 yielded PCR products of the expected size, and 145 were successfully sequenced, including 86 from animals, 41 from humans, and 18 from water (Table 1). Nucleotide sequences of isolates from 31 specimens were identical to those of the C. ubiquitum reference sequence (contig 0067 from specimen 33496). The remaining sequences had nucleotide differences of 8.2%–38.2% from the reference (Table 2). The gp60 nt sequences of C. ubiquitum differed from each other in length at most by 171 bp, with all insertions/deletions in trinucleotide, thus maintaining the reading frame (Technical Appendix Figure). Most of the length differences were due to 4 sequences generated from rodents in the Slovak Republic. The remaining sequences differed from each other in length by at most 12 bp. Most nucleotide sequence polymorphism occurred in the 3′ half of the gene (Technical Appendix). 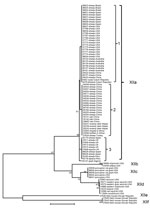 Figure 2. Genetic relationship among 6 Cryptosporidium ubiquitum subtype families (XIIa–XIIf) in animals as indicated by a neighbor-joining analysis of the partial gp60 geneThe XIIa subtype family contains all specimens from domestic and...

Within the XIIa subtype, minor sequence differences were found among specimens, leading to the formation of 3 common subtypes (subtypes 1–3) and several rare subtypes with a single nucleotide substitution each (for example, 19716, 35147, 37827, 37828, and 37830). A few nucleotide substitutions were also seen in the subtype family XIId (Technical Appendix). These subtypes within subtype families XIIa and XIId could not be named using the subtype nomenclature based on the number of trinucleotide repeats TCA, TCG, and TGT (24) because of the lack of such repeats in the gp60 gene of C. ubiquitum (Technical Appendix). 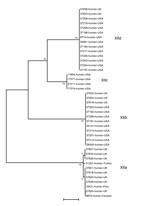 Figure 3. Genetic relationship among 4 Cryptosporidium ubiquitum subtype families (XIIa–XIId) in humans as indicated by a neighbor-joining analysis of the partial gp60 geneThe XIIa subtype family is seen in humans in most...

The gp60 gene currently is the most commonly used genetic marker for subtyping Cryptosporidium spp., including several notable species that are pathogenic to humans and a few pathogenic species/genotypes that are not found in humans. These gp60-based tools have been used effectively in epidemiologic studies of cryptosporidiosis transmission in humans and farm animals (2). However, identifying the gp60 gene of the major emerging human-pathogenic species, C. ubiquitum, has been challenging (24). In this study, we utilized recent developments in next-generation sequencing technology and conducted a genomic survey of 1 C. ubiquitum specimen to identify its gp60 gene. On the basis of results from this sequence survey, we developed a gp60-based C. ubiquitum subtyping tool. The application of this new tool in the analysis of specimens from humans, animals, and water has shown the existence of host adaptation in C. ubiquitum infections, and the findings suggest that sheep and rodents are a key source of C. ubiquitum transmission to humans, possibly through direct human contact with infected animals or by contamination of drinking source water.

The sequence differences between the gp60 gene in C. ubiquitum and the gp60 gene in other Cryptosporidium spp. may affect its functions. Unlike the gp60 gene of all 11 previously characterized Cryptosporidium spp. and genotypes (24), the trinucleotide repeats of TCA/TCG/TCT, which code for the polyserine tract at the 5′end of the gene, commonly used to differentiate subtypes within each subtype family, were not observed in the gp60 gene sequence of C. ubiquitum. Previous research suggested that subtypes with short serine repeats may be selectively favored in humans over long repeats (23). Other unique features of the gp60 gene in C. ubiquitum include the absence of the signal peptide cleavage site in the N terminal and furin proteolytic cleavage site between gp40 and gp15. These differences could affect the processing and transport of the gp60 protein.

Although C. ubiquitum has the most broad host range among Cryptosporidium spp., the subtype data generated provide evidence that infection with this species has led to host adaptation. All field specimens from domestic and wild ruminants in both the New and Old World belonged to the XIIa subtype family. Despite its common occurrence in both domestic and wild ruminants in many geographic areas, subtype family XIIa has not been found in rodents in the United States and the Slovak Republic. Nevertheless, this host adaptation is not strict host specificity; C. ubiquitum of the XIIc subtype family was experimentally transmitted from a ring-tailed porcupine to goats, and the XIIa subtype family was found in an isolate from 1 equine specimen from the United Kingdom (Table 1 and [12]).

In conclusion, data generated thus far have shown host adaptation in C. ubiquitum at the gp60 locus and some potential geographic differences in the epidemiology of C. ubiquitum infections in humans. These finding highlight the need for subtype analysis of unusual Cryptosporidium species to clarify the sources and transmission dynamics of zoonotic cryptosporidiosis in rural areas.

Dr Li is a lecturer at East China University of Science and Technology. Her research interest focuses on the molecular epidemiology of zoonotic parasites.

This study was supported in part by the National Natural Science Foundation of China (nos. 31229005, 31110103901, and 31302078); Open Funding Project of the State Key Laboratory of Veterinary Etiological Biology, Lanzhou, China; Fundamental Research Funds for the Central Universities, China; and the Ministry of Education, Youth and Sports of the Czech Republic (no. LH11061).