We investigated the dynamics of seroconversion in severe acute respiratory syndrome coronavirus 2 (SARS-CoV-2) infection. During March 29–May 22, 2020, we collected serum samples and associated clinical data from 177 persons in London, UK, who had SARS-CoV-2 infection. We measured IgG against SARS-CoV-2 and compared antibody levels with patient outcomes, demographic information, and laboratory characteristics. We found that 2.0%–8.5% of persons did not seroconvert 3–6 weeks after infection. Persons who seroconverted were older, were more likely to have concurrent conditions, and had higher levels of inflammatory markers. Non-White persons had higher antibody concentrations than those who identified as White; these concentrations did not decline during follow-up. Serologic assay results correlated with disease outcome, race, and other risk factors for severe SARS-CoV-2 infection. Serologic assays can be used in surveillance to clarify the duration and protective nature of humoral responses to SARS-CoV-2 infection.

Severe acute respiratory syndrome coronavirus 2 (SARS-CoV-2) is a betacoronavirus that causes coronavirus disease (COVID-19), a respiratory infection with systemic involvement and an estimated 1% death rate (1). COVID-19 was first documented in Wuhan, China (2), at the end of 2019. The outbreak quickly transformed into a pandemic. Countries have tried to manage the pandemic by implementing different strategic interventions with varying levels of success (3). Experts agree that diagnostic tests, and the subsequent interventions they generate, are essential to controlling SARS-CoV-2 transmission.

Reverse transcription PCR (RT-PCR) relies on RNA sequencing rather than viral proteins, enabling researchers to develop assays shortly after the viral sequence is identified. Because of this advantage, RT-PCR quickly became a common testing method for COVID-19 (4). However, the urgent global scale-up of nucleic acid amplification testing, including PCR, exposed supply chain vulnerabilities, such as shortages of swabs and reagents. Diagnostic tests remain unaffordable in many developing countries, limiting national containment strategies.

Serologic assays for viral infections can contribute to vaccine development, diagnostic deployment, and prescription of new therapeutics. They might also offer insight into pathophysiological aspects of COVID-19. We used ELISA (Mologic Ltd., https://mologic.co.uk) for COVID-19 to characterize the serologic response in SARS-CoV-2 infection. These tests were designed for affordability and accuracy, enabling access and manufacture in low- and middle-income countries. We used these tests on serum samples from persons with confirmed SARS-CoV-2 infection in London, UK, to identify demographic and clinical variables that might influence antibody responses.

South West London Pathology (London) provides microbial diagnostic testing for the region, including St. George’s Hospital, a tertiary teaching hospital. We obtained excess diagnostic material from South West London Pathology in the form of serum samples from patients with RT-PCR confirmed SARS-CoV-2 infection. The serum samples were anonymized and stored at 4°C for <2 weeks. Patients were sampled longitudinally to assess antibody dynamics; the data comprised >30 samples per day. If samples became unavailable from 1 patient (i.e., the patient was discharged or died), we added a new patient to the cohort. Excess diagnostic material was collected from 177 persons during March 29–May 22, 2020. The study population consisted of 9.9% (177/1,785) of persons (patients and staff) who tested positive for SARS-CoV-2 infection at South West London Pathology during this period.

We obtained data from patients’ electronic medical records. We coded outcomes (as of May 22) as hospital admission, intensive care unit stay, death, or discharge. We recorded the length of hospital stay of patients who were discharged or died. We considered peaks of inflammatory markers (e.g., C-reactive protein [CRP]) to be the highest values recorded from 5 days before the first positive swab sample through the end of the study. We obtained blood values at the time of diagnosis (within 3 days after the first positive swab sample was taken).

We used the COVID-19 IgG ELISA developed by Mologic Ltd. and manufactured by Omega (Omega Diagnostics Group PLC, http://www.omegadiagnostics.com), according to the manufacturer’s instructions (Appendix 1). The assay contained the spike and nucleoprotein antigens of SARS-CoV-2. Between plate coefficients of variation were 21.0% (lower cutoff) and 16.5% (positive control; n = 16). Higher ambient temperatures in the laboratory resulted in higher optical density readings (Appendix 1).

We acknowledge the importance of patient and public involvement in clinical studies. However, because of the rapid progression of COVID-19 and the challenges of lockdown in the United Kingdom, we did not have sufficient time to involve patients and members of the public in the development, implementation, or interpretation of this study.

We studied 177 patients who provided 645 distinct excess diagnostic material samples (Table 1). Patients were from diverse ethnic backgrounds (34% White, 35% non-White, 31% unreported; Appendix 1), and the median age was 64 years (interquartile range [IQR] 52–77 years). Fifty-seven percent were male, and 73% had >1 concurrent condition. Nineteen percent were asymptomatic and did not report respiratory symptoms at admission; these patients tested positive for SARS-CoV-2 infection while receiving treatment for other conditions. Among the 143 symptomatic patients, the median time from symptom onset to testing was 6 days (IQR 3–9 days). Of the 177 patients, 166 (94%) were hospitalized, 7 (4%) were staff, and 4 (2%) were outpatients. Of the hospitalized patients, 44 (27%) died (median time to death was 19.1 days [IQR 14.8–24.8 days]), 108 (65%) were discharged (median length of stay was 19.3 days [IQR 10.6–31.1 days]), and 14 (8%) remained hospitalized at the end of the study. Sixty-three (38%) patients were admitted to intensive care during the study. 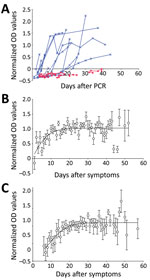 Unlike other markers of inflammation, CRP is routinely measured in patients with COVID-19. Rising CRP levels are indicators of a poor prognosis (if other causes are excluded), and are associated with cytokine release syndrome (5; Y. Woo, unpub. data, https://osf.io/mxsvw). CRP levels were significantly higher in patients with respiratory symptoms at diagnosis than in those without symptoms (Figure 2, panel A). Patients who died or required intensive care during the study period had higher CRP levels than patients who did not die or require intensive care (Figure 2, panel B). Patients who did not seroconvert had lower CRP levels than those who did (Figure 2, panel C). Peak CRP levels had more pronounced associations with outcomes and seroconversion than did CRP levels at the time of the first positive swab sample result (Figure 2, panels D–F). CRP levels peaked a median of 12 days (IQR 8–17 days) after symptom onset and 4 days (IQR 1–11 days) after the first positive PCR result. Other inflammatory markers, such as peak D-dimer, fibrinogen, and ferritin, were also higher in patients with respiratory symptoms at diagnosis. However, these data were available for fewer patients (Table 2; Appendix 1).

Our results illustrate serologic responses over the course of SARS-CoV-2 infection. Serologic tests can enhance diagnostic capability, especially during later infection (4,6,7), when viral loads might decrease. Serologic testing might also inform surveillance, seroepidemiologic studies, and contact tracing. Our study shows that a substantial proportion of COVID-19 patients require 3–6 weeks to generate antibodies. Furthermore, 2.0%–8.5% of patients do not have detectable antibodies within 60 days after infection. Most research on antibody dynamics came from China during the early stages of the pandemic (4,6,8). Here, we describe variables that influence IgG dynamics in SARS-CoV-2 infections in diverse populations.

The performance metrics of this ELISA (Appendix 2) are comparable to other validated assays. This first-generation ELISA might confirm infection in patients without a virologic diagnosis. We applied this test to study an ethnically and clinically diverse population. In most persons who seroconverted, the conversion was relatively rapid; NODs remained stable for weeks after infection (Figure 1). The probability of seroconversion was associated with increased age and concurrent conditions such as hypertension and increased body mass index. Higher NODs were associated with non-White race, admission to hospital, and higher peaks for inflammatory markers, such as CRP. Higher antibody titers are associated with clinical severity (i.e., death or admission to intensive care during study) in our cohort, in agreement with findings from other studies (4).

CRP is a sensitive marker of elevated proinflammatory cytokines, including interleukin 6. These cytokines might play a central role in cytokine release syndrome, which is associated with increased risk for death (Y. Woo, unpub. data, https://osf.io/mxsvw). Interventions such as tocilizumab, an interleukin-6 receptor antibody, interrupt the proinflammatory cascade. Such interventions might limit disease progression and reduce risk for death (9; E. Baker, unpub. data, https://osf.io/d2nh8); they are being studied in several randomized clinical trials. In our study, a small proportion of patients did not seroconvert within 20 days after testing positive for SARS-CoV-2 infection. Several mechanisms might explain this finding. First, these patients might never seroconvert. Second, their immune responses might be confined to other antigens or mediated through T cells. Another probable explanation is that some relatively mild infections might be restricted to the mucosal cells of the respiratory tract, where antibody responses are dominated by the secretory immune system. In this scenario, the systemic immune system might produce little or no IgG.

The association of higher NODs with elevated CRPs could indicate several potential pathways. For example, antibody responses might be closely related to cytokine response syndrome, which in turn is associated with more severe disease and death. Alternatively, elevated CRPs might indicate a more pronounced innate immune response in persons already at risk for severe disease and death. This heightened innate response might be associated with a higher viral load (potentially caused by enhanced viral replication mechanisms) and genetic interactions that influence innate inflammatory pathways. Therefore, a higher viral load might lead to higher NODs for antibodies in the acquired immune response pathways. Small trials on the potential therapeutic benefits of interventions using passive antibody transfer (10) suggest that the heightened innate response hypothesis is more probable (11). Higher antibody responses are also associated with higher doses of a nonreplicating Ad5-vectored vaccine for SARS-CoV-2 (12).

Limitations of PCR include difficulties with sampling; different sample types and techniques yield varying results. Furthermore, PCR demonstrates diminishing diagnostic yield for COVID-19 as respiratory viral loads fall and symptoms subside (8,13). It might also produce false positives caused by lingering viral nucleic acid, which is not infective yet can persist for weeks after infection. Contamination could also occur during sample handling; because PCR requires amplification steps, this assay has heightened risk for contamination. Serologic testing, and the ability to detect viral antigens, may increase diagnostic accuracy for COVID-19. Our findings support early studies suggesting that physicians should consider these diagnostic modalities in conjunction, especially when a patient has negative PCR results but has symptoms of COVID-19 (6). Many COVID-19 patients experience a delay in care, a trend that emphasizes the importance of containment strategies that encourage isolation.

One limitation of our study is that it is based mainly on hospitalized patients, of whom 1 in 5 did not have COVID-19 symptoms. Further studies should document antibody dynamics of patients with less severe infections, such as healthcare workers (14), and patients with low viral loads at the time of consultation. Our findings will complement the large cross-sectional and longitudinal serologic surveys, especially as high-quality tests become more widely available. NODs were within a limited dynamic range (we could not conduct dilution studies because of small sample volumes) but nevertheless associated with clinically relevant features of COVID-19. Prospective studies are assessing the relationships between viral loads and serologic responses in patients. Regular and long-term serologic assays will be essential to monitoring the duration of the humoral response and its protective role against SARS-CoV-2.

Page created: October 17, 2020
Page updated: December 21, 2020
Page reviewed: December 21, 2020
The conclusions, findings, and opinions expressed by authors contributing to this journal do not necessarily reflect the official position of the U.S. Department of Health and Human Services, the Public Health Service, the Centers for Disease Control and Prevention, or the authors' affiliated institutions. Use of trade names is for identification only and does not imply endorsement by any of the groups named above.