Invasive capsular group Y (MenY) has historically been uncommon in the United Kingdom and until recently accounted for <30 cases annually (5). After 2006, however, enhanced surveillance by the Health Protection Agency (HPA) identified an increase in invasive MenY cases in England and Wales. In addition, recent surveys suggest that MenY carriage in England increased substantially during the past decade (8,9). Consequently, the HPA investigated the clinical, epidemiologic, and microbiologic characteristics of invasive MenY disease in England and Wales during 2007–2009.

The HPA conducts meningococcal surveillance in England and Wales through a combination of clinical and laboratory reporting schemes and receives all meningococcal death registrations from the Office for National Statistics (www.statistics.gov.uk). In addition, the HPA Meningococcal Reference Unit provides a national service for species confirmation and grouping/typing of invasive Neisseria meningitidis and offers free nonculture confirmation by using PCR directly from clinical specimens routinely submitted by National Health Service hospital laboratories (5). Data from all sources are reconciled in a single database and deduplicated regularly. Invasive meningococcal disease was defined as isolation of the organism or identification of meningococcal DNA from a normally sterile body site. MenY was confirmed by sero/genogrouping (5).

DNA was extracted by using the DNeasy blood and tissue kit (QIAGEN, Crawley, UK). Briefly, 1 mL meningococcal suspension in physiologic saline (adjusted to an optical density equal to 0.1 at 650 nm) was heat-killed at 60°C for 70 min and then pelleted at 6,000 × g for 10 min. After aspiration of the supernatant, DNA was extracted by using the manufacturer’s gram-negative protocol (QIAGEN) (10).

Clinical follow-up was conducted for all MenY cases in 2009 confirmed by culture, PCR, or both. The general practitioner, hospital physician, or local health protection unit was contacted for information about underlying medical conditions, recent travel, clinical presentation, sequelae, and outcome.

Data were analyzed by using Stata version 11.0 (StataCorp LP, College Station, TX, USA). Annual age-specific population estimates were obtained from the Office for National Statistics. Data that did not follow a normal distribution were described as medians with interquartile ranges (IQRs) and compared by using the Mann-Whitney U test. Proportions were compared by using the χ2 test or Fisher exact test, as appropriate. Logistic regression was used to calculate odds ratios (ORs) with 95% CIs after adjustment for potentially confounding variables and to identify independent risk factors for death.

HPA has approval under the Health and Social Care Act 2001 to process confidential patient information for public health purposes. Details are available at www.legislation.hmso.gov.uk/si/si2002/20021438.htm. 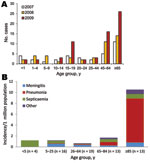 Figure 1. Number of persons with invasive meningococcal capsular group Y (MenY), by age group and year (A) and incidence with clinical features of MenY disease, by age group, in 2009 (B), England...

The nadA gene was found exclusively in cc174 isolates, all 24 of which harbored the gene. Sequence analysis of nadA was performed among a subset of cc174 isolates (collected during epidemiologic year 2007–08 [7 isolates]) all harbored identical alleles encoding NadA peptide subvariant 3.P0008. 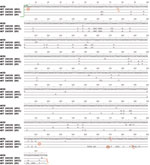 lpxL1 genotype was indeterminate in 1 cc174 strain because the existing primers failed to amplify the gene and flanking regions, possibly because of variation in the primer target sites. Mutations in the lpxL1 gene were identified in all but 2 cc23 isolates and none of the other ccs. Of the 62 cc23 isolates with an lpxL1 mutation, all 30 ST-1655 isolates harbored a previously unpublished single-base deletion at nt A4 (designated mutation XVI) (Figure 2), which resulted in a frame shift and premature stop codon. This mutation also was observed in 1 ST-8414 (cc23) and 3 ST-23 (cc23) isolates. Fifteen of the remaining 19 ST-23 isolates harbored frame-shifted alleles (1 mutation IV, 13 mutation V, and 1 mutation VI [15]), whereas another was interrupted by the insertion sequence IS1301 (mutation I) (16). The remaining 3 ST-23 isolates harbored an lpxL1 allele in which 3 adenines occupied the prototype (strain MC58) stop codon. This configuration was designated mutation XV. The resultant allele was extended by 18 bp. Of the remaining 9 cc23 isolates (1 not fully characterized for ST and the remainder belonging to other less well-represented STs), another 2 harbored mutation XV, 6 harbored mutation V (16), and 1 harbored a previously unpublished deletion at nt T813 (designated mutation XVII). The frame-shifted allele was extended by 47 bp.

Mutation XV is predicted to extend the encoded peptide product by 6 aa. However, it does not alter the upstream amino acid sequence, which remains complete in comparison with the putative wild-type peptide. It is possible, therefore, that the enzyme encoded remains functional. Of the affected isolates, 3 of 5 occurred in children <15 years of age, none of whom died; clinical diagnosis was available for 4 case-patients, including 3 with septicemia and 1 with meningitis; case numbers did not increase with time (1 in 2007, 2 in 2008, and 2 in 2009).

Routine provision of a national reference service by HPA for meningococcal species confirmation, capsular grouping and typing, and regular integration of multiple data sources provides a robust and stable enhanced national surveillance for invasive meningococcal disease covering the 55 million persons in England and Wales. Our surveillance indicates an increase in invasive MenY cases in England and Wales since 2007. A similar increase was observed a decade ago in the United States, where MenY currently accounts for one third of all meningococcal infections (17). Clinical follow-up of cases diagnosed in 2009 indicated that MenY affects mainly older adults with underlying medical conditions (18,19). Almost one third of MenY case-patients had pneumonia. MenY is the most prevalent cause of meningococcal pneumonia (18), although capsular group W135 pneumonia also has been described (20–22), whereas MenB and MenC rarely cause pneumonia (18). In 1 study, pneumonia was 4× more common among MenY cases (12%) than among cases with other capsular groups (3%), even after adjustment for patient age (23). Similarly, a literature review of 58 published cases of meningococcal pneumonia during 1974–1998 found MenY as the most common pathogen (44%) and caused disease mainly among older adults with underlying medical conditions (18). CFR for MenY pneumonia was 8.6% (18), which was similar to other MenY reports (5,23–28). The higher CFR in our surveillance (18% overall and 47% for pneumonia) may be explained by the older age of pneumonia case-patients and higher prevalence of underlying medical conditions. CFR was also higher than that reported for MenB (5.1%) or MenC (11.6%) in England and Wales (5).

Molecular typing showed that ST-1655 (cc23) was responsible for the increase in MenY cases. We found no evidence of clustering of cases to suggest an outbreak. A recent meningococcal carriage study involving first-year university students in Nottingham, United Kingdom, during 2008–09 reported rates of 42% at the initial time-point, which increased to 62% during the study, with more than half the carriage isolates belonging to MenY (8). These rates are substantially higher than those in a previous multicentre study among 15–19-year-old UK school students during 1999–2001, where MenY carriage was only 5%–6% (9). In the Nottingham study, more than half of the carriage isolates belonged to 1 of 4 porA types (P1.5-1,10; P1.21,16; P1.5,2; and P1.21-7,16) and 4 ccs (cc23, cc60, cc167, and cc174) (8), which confirms that most meningococcal strains causing invasive disease—particularly ST-1655 (cc23)—also are circulating in England.

The association between MenY ccs and specific clinical features in different age groups is intriguing. Certain strains might have acquired specific virulence factors that facilitate invasion of particular organs, such as the lungs or the brain. In our study, for example, infection with MenY strains harboring lpxL1 mutations was associated with meningitis, particularly in younger persons. In contrast, cc174 strains, which all harbored NadA, were more likely to cause pneumonia in older adults.

Meningococcal lipid A is the bioactive component of lipooligosaccharide (or endotoxin) that induces a proinflammatory cytokine response through the toll-like receptor 4 (TLR4) innate immunity pathway (29). Up to 9% of invasive clinical meningococcal strains (including MenY) have 5 instead of 6 acyl chains because of inactivating mutations in the acyl-transferase gene, lpxL1 (16). Such mutant strains induce a lower proinflammatory cytokine response, which may enable them to evade the host innate immune system (16,30). They were also more likely to cause meningitis in younger persons and less likely to have features associated with activation of the coagulation system in meningococcal septicemia (rash, septic shock, or thrombocytopenia) (16). A recent study in the Netherlands reported a high proportion (61%) of lpxL1 mutations among 71 cc23 carriage isolates (predominantly MenY) compared with 0.3% among 751 non-cc23 carriage isolates and 8.6% among 464 non-cc23 invasive disease isolates (31). No cc23 strains existed among invasive clinical isolates collected in the Netherlands during 2001–2006 (31).

In our study, lpxL1 mutations were identified in 97% of invasive cc23 MenY isolates and occurred infrequently among non-cc23 MenY isolates. The 2009 increase in ST-1655 (cc23), which all harbored lpxL1 mutations, is concerning because of its preponderance for causing meningitis in healthy young persons. Many of the lpxL1 mutations result from potentially reversible alterations in homopolymeric tracts, and phase variation of lpxL1 has been speculated to occur within the host to avoid enhanced recognition by the immune system after crossing the nasopharygeal epithelium (16). The uniquely high frequency of mutants among invasive disease and carriage cc23 isolates suggest that these have an enhanced propensity to the mutant state for reasons as yet unknown. The diversity of the mutations within closely related lineages suggest that they have occurred in independent events. The most widely distributed mutation among cc23 (mutation V) occurs in a relative long poly-A tract, which would be more likely to occur independently at relatively high frequencies. Mutation XVI occurs in a relatively short poly-A tract, as reflected in its relatively narrow distribution. That it is the sole mutation among ST-1655 isolates probably reflects the recent, rapid expansion of this particular lineage. We also have identified new lpxL1 mutations that could potentially result in underacylated lipid A, but whether the mutations result in underacetylation will require confirmation in future studies.

The nadA gene was present only in cc174 strains, representing 21% of MenY isolates. A similar proportion (23%) was reported among invasive MenB isolates in England and Wales (12), but may be present in up to 100% of certain hypervirulent lineages (32,33). NadA is a surface-exposed neisserial adhesin that binds human β1-intergrins (34) and is involved in epithelial cell adhesion and invasion (32,33). Interactions between bacterial adhesins and β1 integrins have been described for several pathogens that invade the respiratory or gastrointestinal mucosa and play a major role in mucosal translocation and triggering the release of chemokines (34). NadA may thus enable MenY strains to invade locally and cause respiratory tract infections, particularly among elderly persons, who often have multiple underlying medical conditions. We have also reported on other meningococcal antigens that are relatively conserved within certain ccs. Some of these antigens are included in investigational meningococcal vaccines currently undergoing clinical trials. Licensed meningococcal quadrivalent conjugate vaccines are available, but given the small number and age distribution of patients, routine vaccination against these capsular groups is unlikely to be cost effective at this time.

Invasive MenY disease has increased in England and Wales, mainly because of ST-1655 (cc23). This cc was significantly more likely to cause meningitis, mainly in young adults, and was associated with the presence of lpxL1 mutations. The increase in invasive MenY disease, particularly as accompanied by recent reports of substantially increased carriage of MenY, will require careful epidemiologic and molecular monitoring.

Dr Ladhani is a pediatric infectious disease consultant with an interest in vaccine-preventable diseases. His primary research interests include infectious disease epidemiology and prevention of childhood infection–related morbidity and mortality.

Novartis Vaccines provided funding for a proportion of the multilocus sequence typing and genotyping.

Page created: January 19, 2012
Page updated: April 23, 2012
Page reviewed: April 23, 2012
The conclusions, findings, and opinions expressed by authors contributing to this journal do not necessarily reflect the official position of the U.S. Department of Health and Human Services, the Public Health Service, the Centers for Disease Control and Prevention, or the authors' affiliated institutions. Use of trade names is for identification only and does not imply endorsement by any of the groups named above.