Travelers are an important population to consider when tracking new and emerging infectious diseases. Travelers move from place to place quickly and can get and spread infectious diseases. U.S. airports are visited by more than 1 billion travelers each year and can serve as the front line for public health officials to detect variants of SARS-CoV-2, the virus that causes COVID-19, in arriving international travelers. Learn more about genomic surveillance for SARS-CoV-2.

The Traveler Genomic Surveillance program (TGS), run by the Travelers’ Health Branch at CDC in partnership with Ginkgo Bioworks and XpresSpa Group, plays an important role in U.S. national surveillance by testing travelers to detect new variants entering the country and fill gaps in global surveillance.

In September 2021, during the Delta wave, the program began collecting samples from travelers arriving from India on 30 flights per week at three major U.S. international airports (John F. Kennedy in New York City, Newark Liberty, and San Francisco). In November 2021, in response to the emergence of the Omicron variant (first detected in southern Africa), TGS quickly scaled up by adding a fourth airport, Hartsfield-Jackson in Atlanta, and increased sample collection from passengers on 30 flights to those on more than 150 flights per week from over 27 countries.

As part of the TGS program, arriving international travelers volunteer to participate and provide nasal swabs that get batched into pools (5–25 swabs per pool) at the airport. These pooled samples are sent to Gingko’s lab network for PCR (polymerase chain reaction) testing. All positives undergo genomic sequencing. Pooled sampling is a unique and valuable approach that allows the detection of multiple variants while conserving resources. Select samples from TGS are shared with CDC’s lab for viral characterization which can help provide information on a variant’s transmissibility, virulence, and response to current treatments or vaccines.

During the initial weeks of the Omicron surge, TGS detected two Omicron subvariants, BA.2 and BA.3, and reported them to the global database, GISAID (Global Initiative on Sharing all Influenza Data), weeks before they were reported elsewhere, demonstrating that the program is able to detect variants early. Since those initial weeks, the program has continued to provide valuable information about variants coming into the United States.

Future program expansion plans are under way and include adding more airports and flights, and collecting individual samples from each person participating in pooled sampling. These individual samples can be tested when more information about the source of a variant is needed. TGS has also started conducting aircraft lavatory wastewater surveillance, which can provide valuable information without directly involving travelers.

Any combination of detection strategies, from most active (individual sampling) to most passive (wastewater), can be used as an early warning indicator. Data from TGS also helps fill in gaps in global SARS-CoV-2 surveillance and can provide information on local circulating variants in countries that may have limited available sequencing data.

TGS is a model of pathogen detection that can be used as an early warning system for the detection of many pathogens beyond SARS-CoV-2. 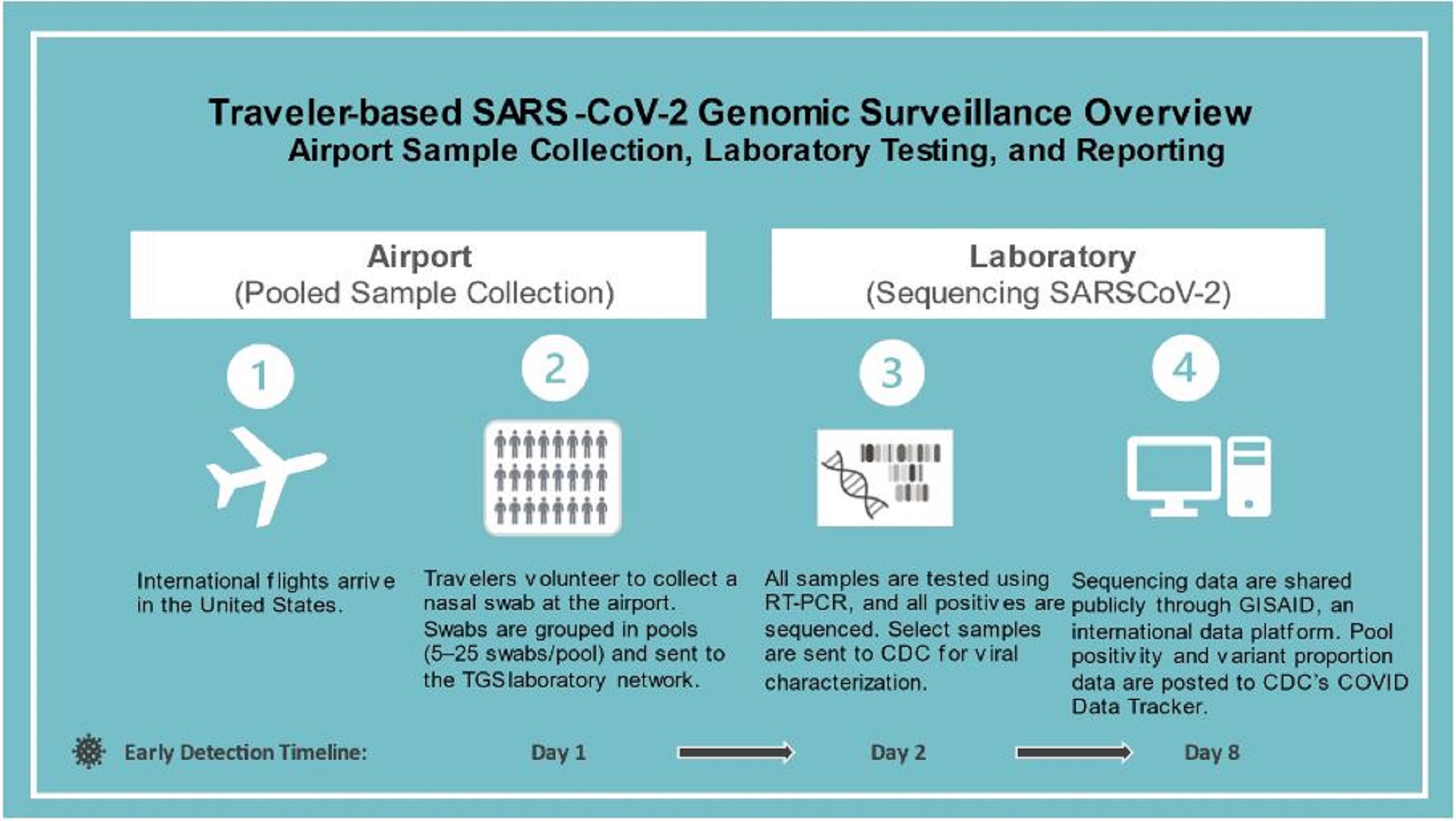 TGS Program at a Glance